In school I colored faces and objects, painted the skies and meadows, and sprinkled yellow stars on navy blue skies. There’s something intriguing in seeing a clean brush being dipped into poster or water color, getting its hairs soaked in hue, and then transferring it on your canvas.

When I was younger I used poster color to on my nails, colored staples to make them look more exciting and vibrant than the boring grey, and lo and behold! painted my eyelids with paint too! I think it was a bright pink. Thank goodness I didn’t suffer from an allergic reaction to paint.

And then I forgot all about my baloney childhood experiences with paint. Until I read about the Loew-Cornell Maxine's Mop 3/8”, paint brush, being a much loved dupe of the famous MAC 239!

Where to find Loew-Cornell brushes in Singapore

I kept hearing ravings about the cheaper alternative to the MAC 239 flat shader brush. Michael’s seems to be the only store that sells Loew-Cornell brushes and we don’t have Michaels in Singapore. We have Artfriend but they don’t carry Loew-Cornell. I’m sure we have brush studios or special craft stores to feed the arts people here, but I don’t know of any. I searched on Google and it seemed like all hope was lost when……

… I somehow found someone who sells Loew-Cornell brushes in Singapore!

At her own house!

I contacted her and went to her house the very next day. It was such a terrible journey. She lived in one of those bungalows in Yio Chu Kang that was so freaking hard to get to – I was lost and lost and lost – and her background was so noisy on the phone. When I finally got to her bungalow, I was greeted with three screaming kids. She’s a painter herself and her cupboard is filled with all kinds and brands of brushes. And Loew-Cornell ones! YAY!!!

The LC brush looks, well, like a paint brush with its purple wooden handle. I always have people asking me “Is that a paint brush?!!” I think it is fine for personal use, but if you’re at a gig or putting makeup for a client, the Loew-Cornell brush doesn’t give the impression of a professional makeup artist, IMO.

The 239 weighs slightly heavier than LC, and for me, I like to feel the weight of the brush. The LC is also slightly smaller in width – just very slightly – but I prefer the 239 due to the better grip. I have sweaty hands and the varnished LC brush tends to feel very slippery.

See, I actually used the Loew-Cornell brush a lot! The name's all faded!

Many people regard the MAC 239 as an all-rounder makeup brush, myself included. Its dense bristles easily pick up color and deposit them on the lids; it can be used to smudge out eyeliner; it can be used on the contour area, browbone highlight, lower lashline, inner corner, outer-V... You get the picture.

So how does the Loew-Cornell brush measure up?

Like the 239, Loew-Cornell Maxine's Mop 3/8” is made out of natural goat hair. 239 is slightly fluffier than LC, which could be why I have to work more to get more color on the LC brush and on the lids. Although LC does a pretty decent job at picking up color eventually, time-consuming is just not a plus point for me.

I’ve washed the Loew-Cornell Maxine's Mop 3/8” many times, every weekend in fact, and there hasn’t been any shedding.

The difference in length, weight, packaging and less fluffy bristles are all bearable. But the one reason, which is the most important reason, that I have since chucked aside the LC brush is that its bristles are very SCRATCHY!

It wasn’t as scratchy at first and that was when I thought the Loew-Cornell Maxine's Mop 3/8” was a perfect dupe for MAC 239. Then it got really scratchy and even though I didn’t have the 239 to compare with then, I knew it was hurting way too much than a regular brush should.

Imagine applying eyeshadow with a TOOTHBRUSH! I could never blend out harsh lines with the Loew-Cornell brush because it would hurt too much, but with the 239 I can.

I do use drugstore brushes and sometimes even prefer them to more expensive ones, so I’m not spoilt with using high-end makeup brushes. This LC brush is not just not as soft and fluffy as the 239 - it actually hurts.

Prices of Loew-Cornell Brushes in Singapore

I use the Loew-Cornell Maxine's mop ¼” to apply powder for the eyebrows due to its small size. It’s not too bad. It looks exactly and works just like the 3/8”, just smaller in size.

The Loew-Cornell 1/4" AMM Mini Mop Brush is said to be a dupe for MAC 217 Blending Blush, but I think it’s just BLAH.

When I forget to bring my makeup brushes home for the weekend, or don’t have time to wash my MAC 239 Eyeshader brush after applying makeup for someone, I do reach for the Loew Cornell brush. I haven’t used it much ever since I got the MAC 239 though.

I would recommend the Loew-Cornell Maxine's 3/8” Mop to people who don’t mind a little scratchiness during eyeshadow application. Many people don’t, and so are perfectly satisfied with the LC one.

If you’re not particular, this brush actually does a pretty decent job of picking up and depositing color on the lids. The LC brush is so well-priced you can afford to buy SIX Loew-Cornell brushes for multiple colors, traveling, and backups, instead of only one MAC 239. 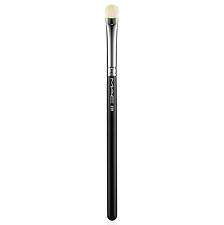 Do you know of any dupes for MAC 239? Or any good eyeshader brush? Share with us! =)

Previous Post: « Sonia Kashuk Bent Eyeliner Brush Review – Using and Comparing the Old and New
Next Post: My dear MAC Fluidline Blacktrack, You Were Wonderful While It Lasted. Too Dry, Goodbye. »