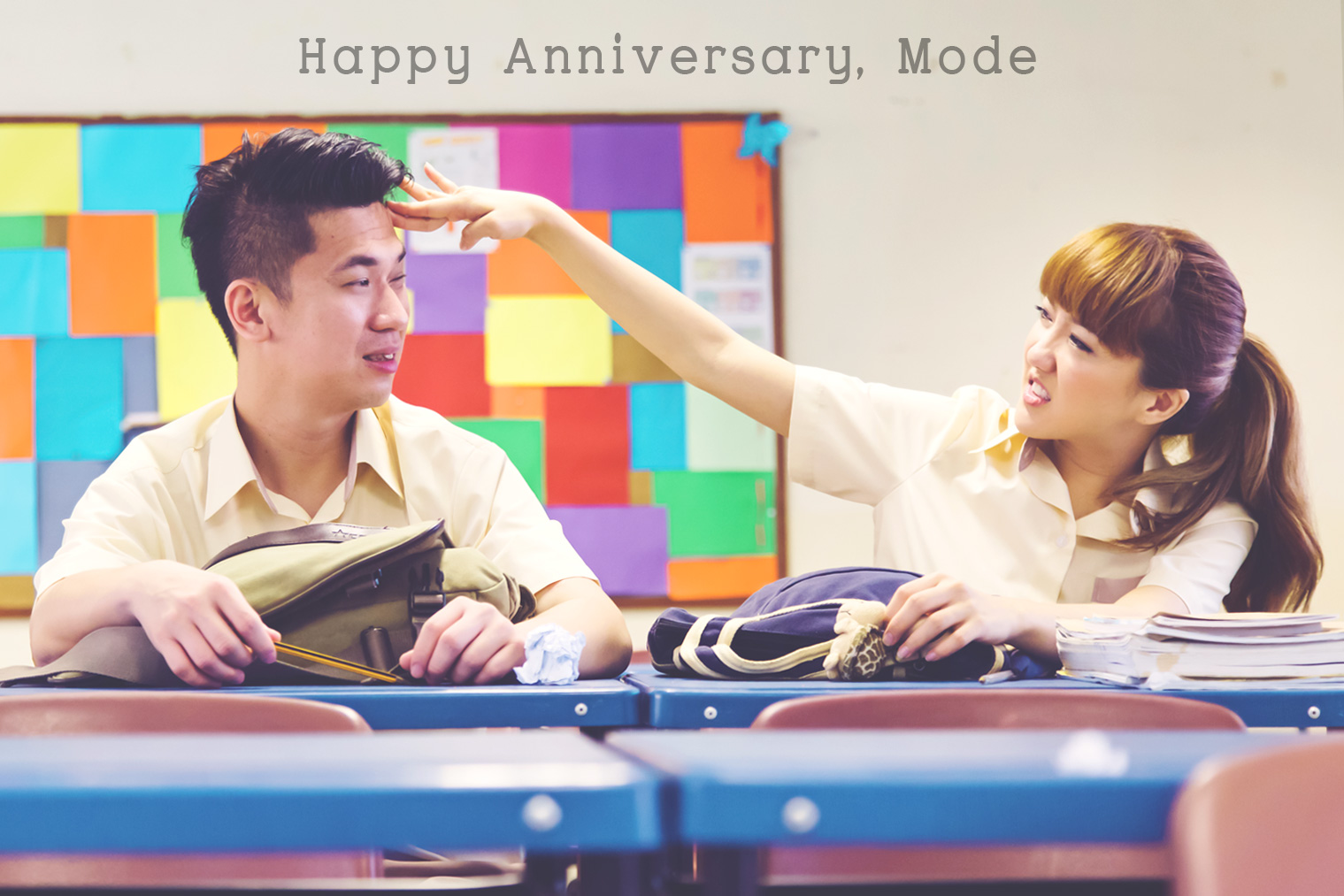 Exactly one year ago on this day, I married my childhood sweetheart.

We had two pre-wedding photoshoots – one in Taiwan at freezing 2 degrees celcius, and another back home in sunny Singapore. I didn’t show much of the Singapore one because it was too near to the wedding and I was too stressed and busy!

On our first anniversary I want to take this opportunity to share these fun pictures with you and tell you more about our little love story. You can also read about The Proposal.

Both Mr Mode and I were born in the same year and belonged to the same cohort but went to different classes. He was in a class famous for notoriety and often came up first in class – counting from the bottom hahaha.

I was at an age where I was testing and pushing boundaries so I had ah lian tendencies, but I had a good head on my shoulders. I wouldn’t call myself a goody-two-shoes, but I often topped my class. (I don’t know how to say this without sounding boastful)

Our first encounter was at a mutual friend’s birthday, his ECA (yes, CCA was known as ECA in the 90s) friend and my ex-boyfriend. Lol.

His existence was not known to me until after the party my classmate came to tell me that this pimply guy showed interest and wanted my number. I’m sorry but my first reaction was “Who?” then “EEEEEEEEEE!!!” 😆 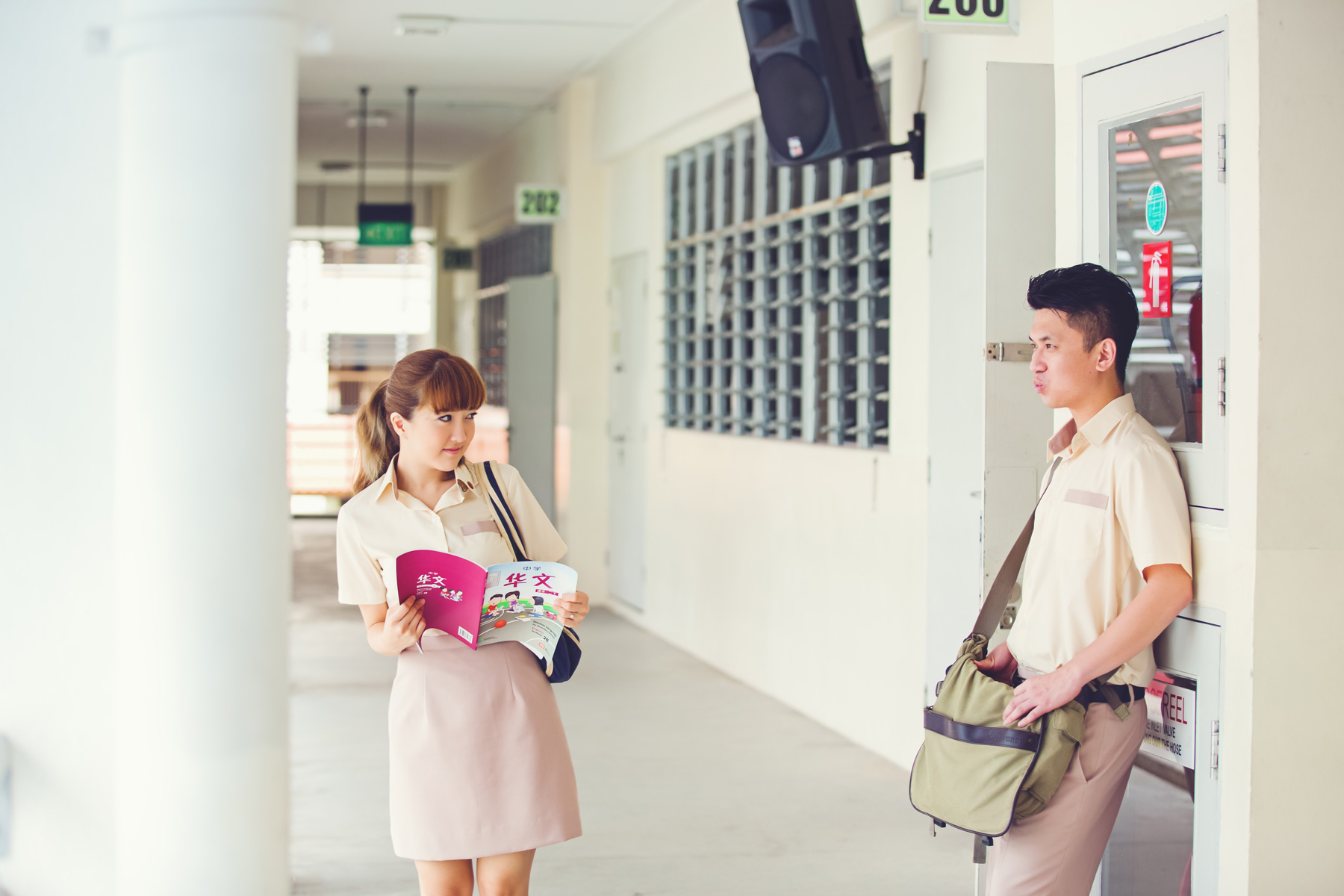 In school the only chance occurrence took place during recess time since we belonged to different classes. Once, his class got into such great trouble that they were relocated to a classroom right across the principal’s office. Everyone HAD to take that route to get to their classes.

Whenever I walked pass, his friends would shout my name and wolf whistle. I don’t think he ever whistled at me though.

What he did though, was stalk me. 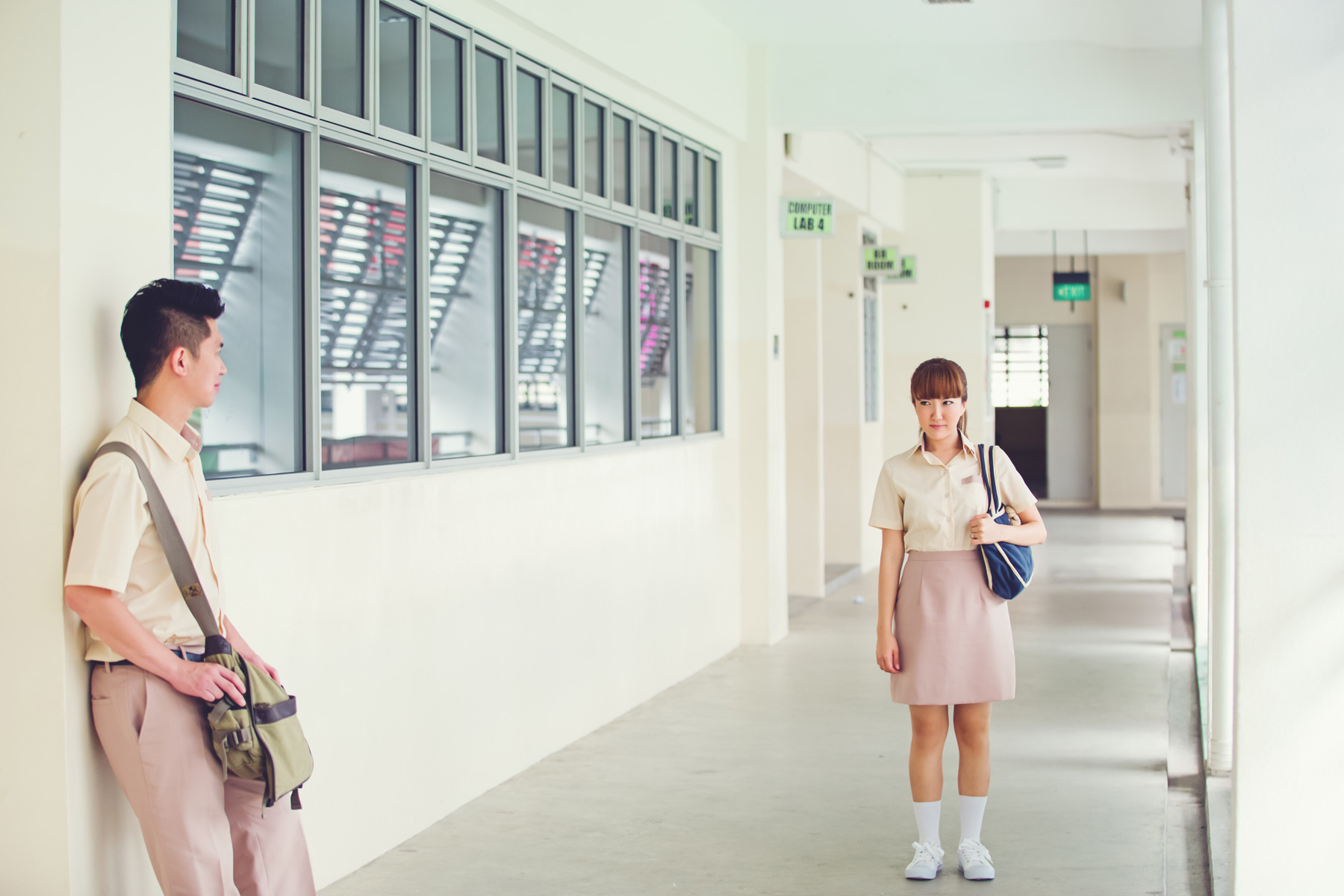 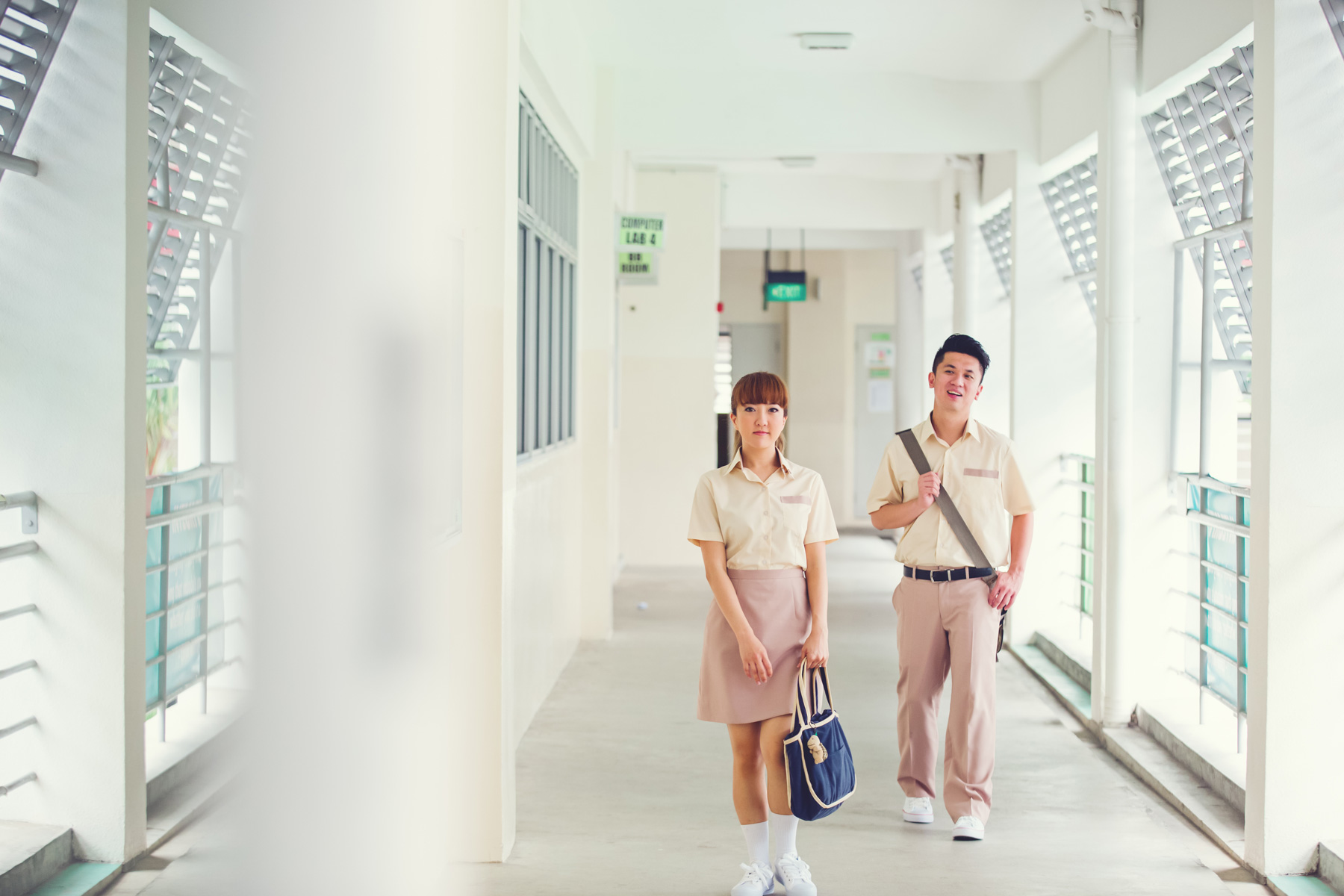 The stalking happened outside the school compound actually. I would often find him at a bus stop I had to walk pass on my way home and he would exclaim “Oh hi! What a coincidence!” every single time. And then proceed to ask if he could send me home since ‘it’s on the way’.

His courage swelled with each successful ‘coincidence’. Sometimes he would guide me across the road and pretend like it was the most dangerous road on earth and sneakily slide his hand into mine. So naughty! BAHAHAHA! 😆 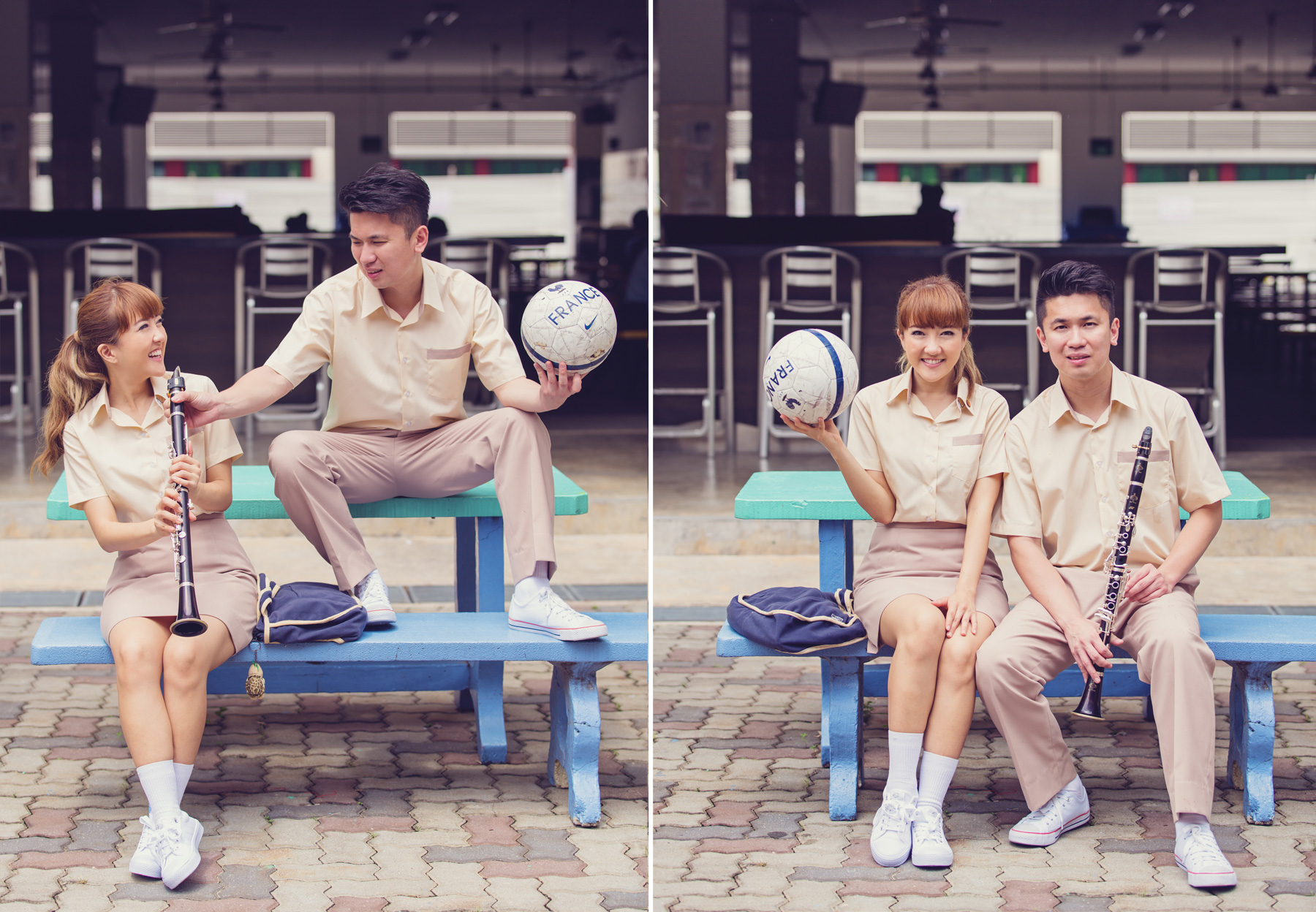 I played the clarinet in the school band, so I was extremely excited to find the band having practice when we arrived! To my surprise, my junior was now the band conductor so I asked to borrow a clarinet. What a wonderful feeling to hold a clarinet in my hands again. 🙂

Mr Mode and I never took any lessons together, FORTUNATELY. I wouldn’t be able to concentrate otherwise. 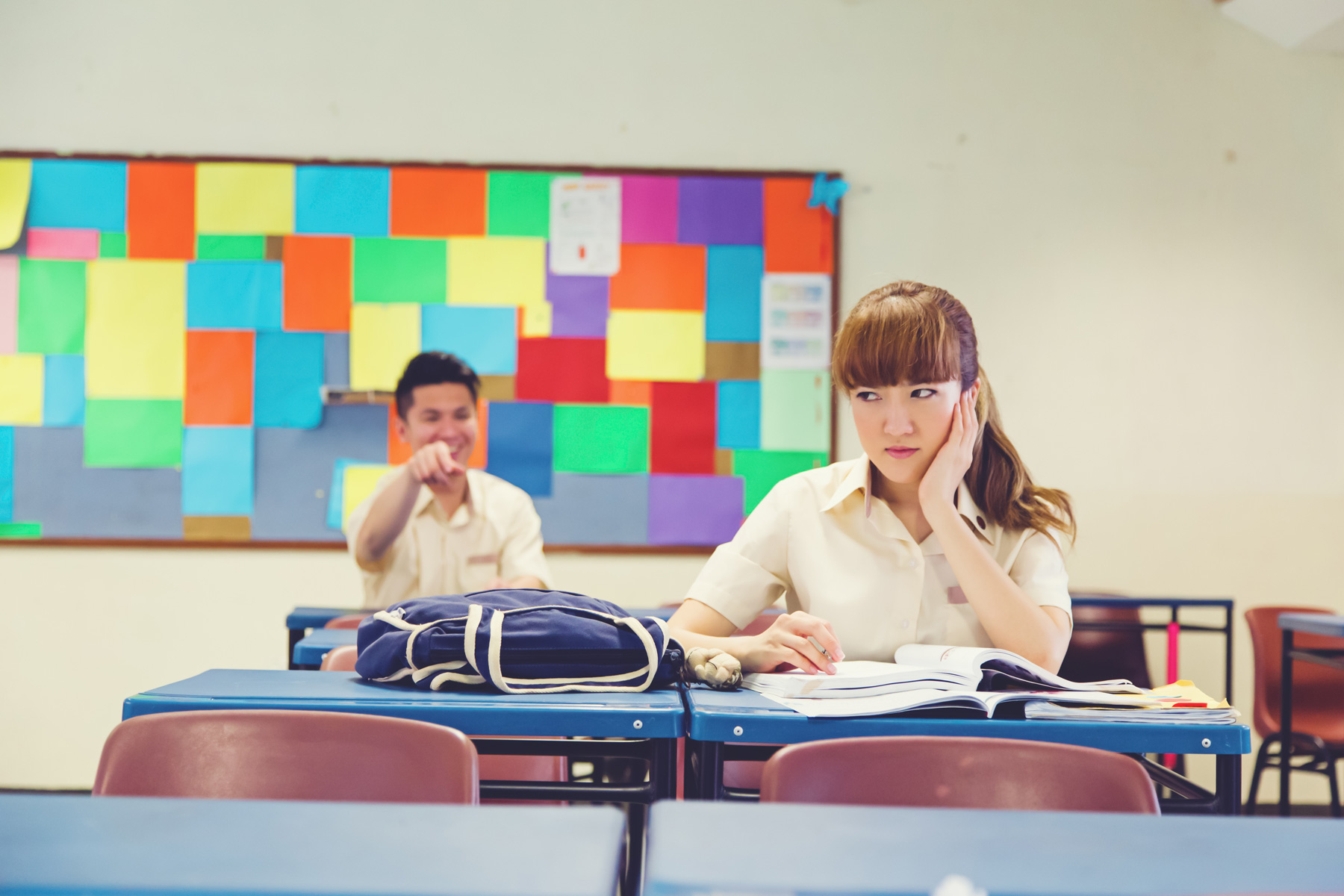 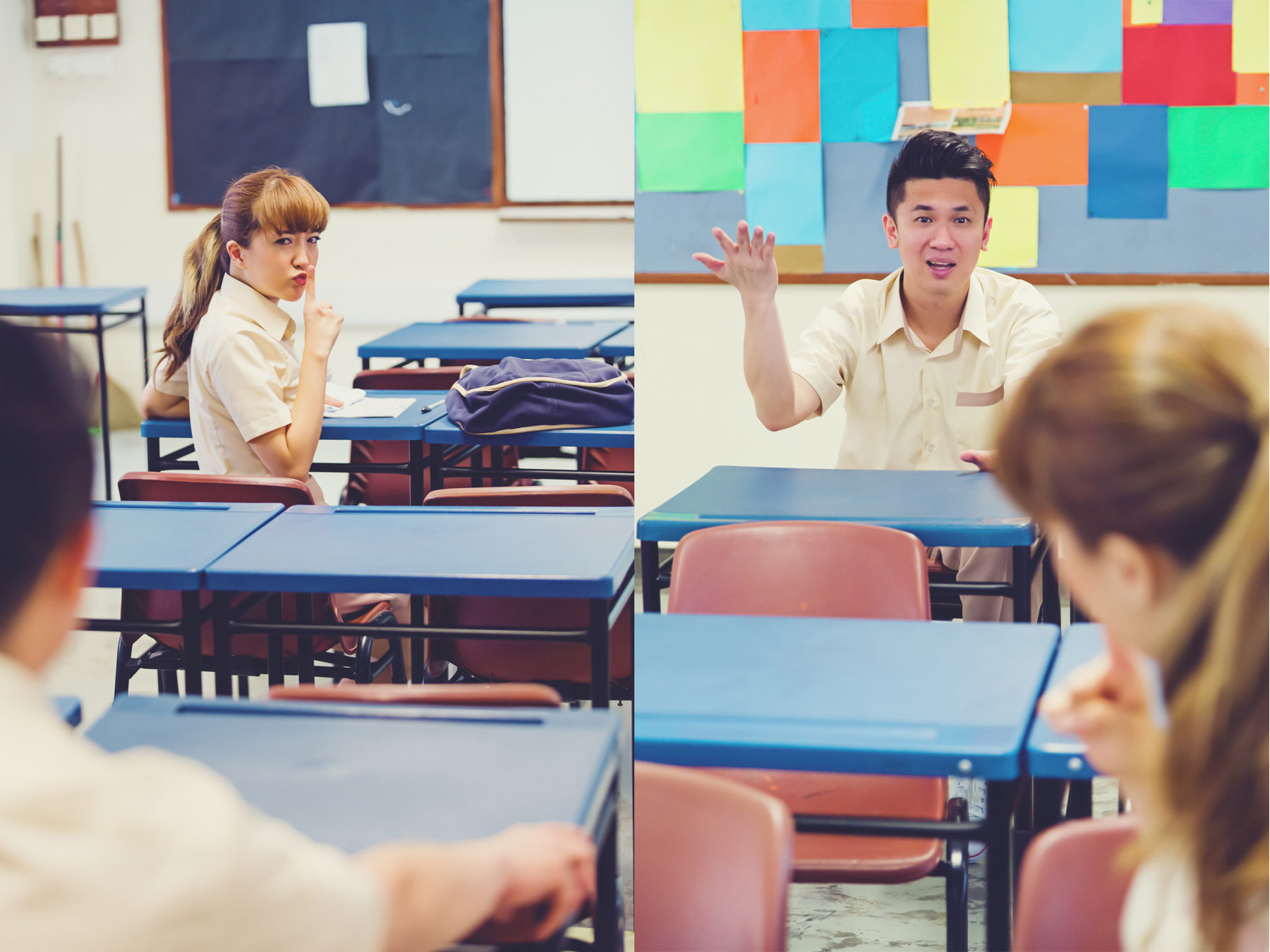 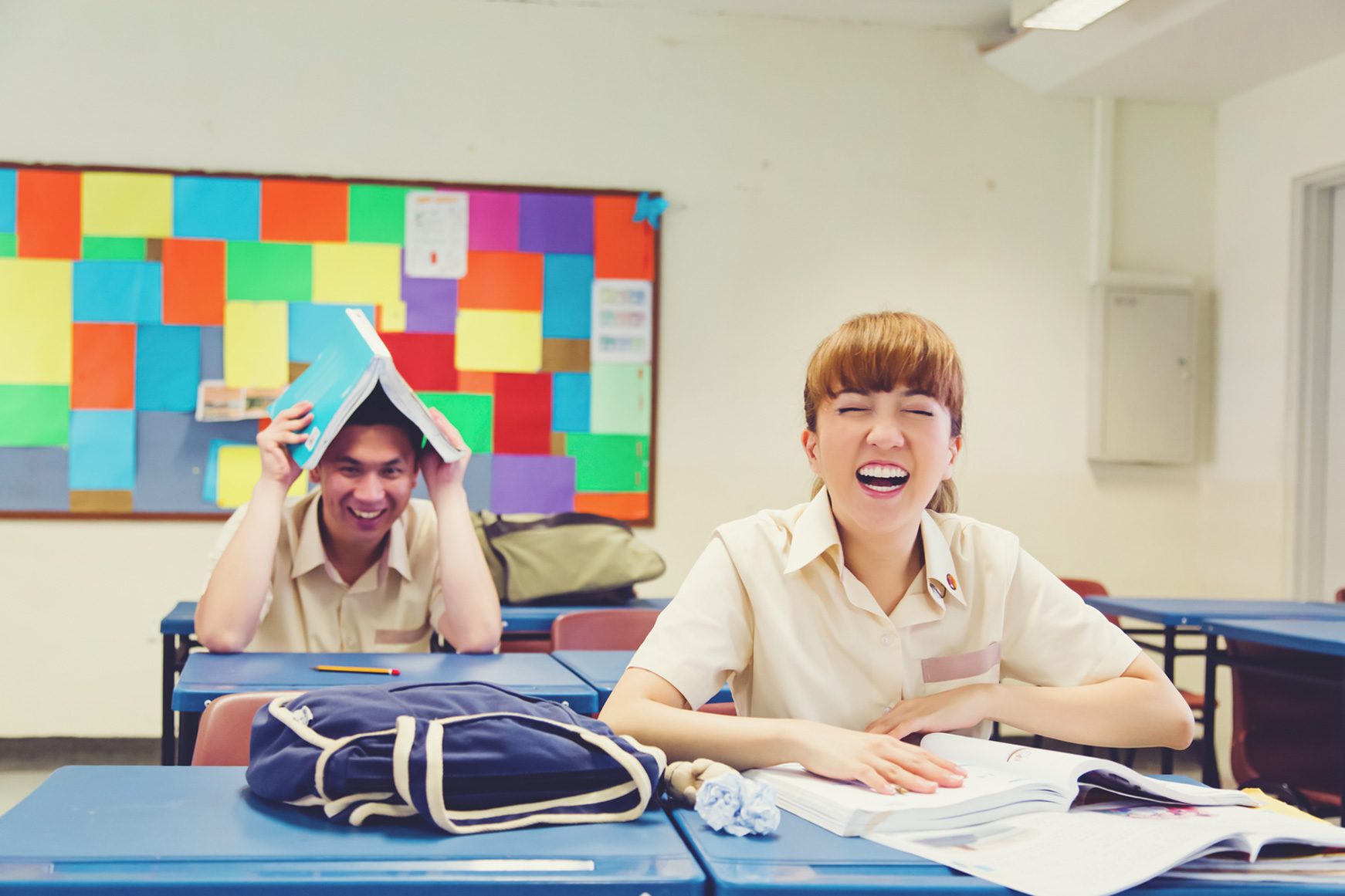 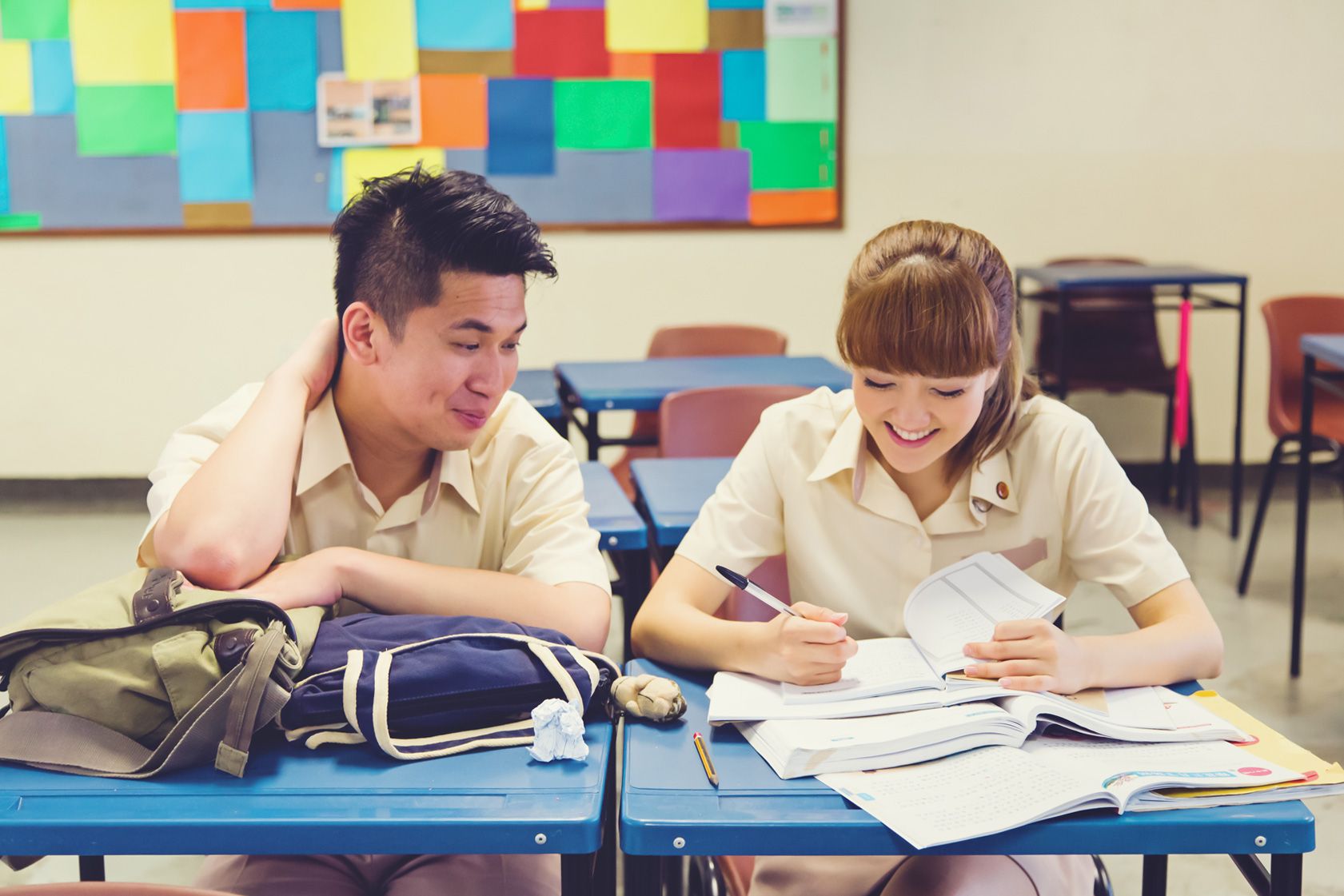 He threw a ball of paper at my back, which explains my frown. And then he made me laugh so much with his nonsense. Notice he was initially sitting at the back of the class, then progressed to the row behind me, and eventually ended up next to me. Nobody told him to do any of that, it’s just in his nature to be very ‘progressive’ with his pursuits. LOLLLL.

That bag I’m carrying? It’s the REAL DEAL. It really was my school bag which I loved so much I’ve been keeping it for 16 years OMG. The turtle keychain attached to it is vintage too.

There was a little pop-up mocha stall right outside the assembly hall and students flocked to buy $1.50 mocha with a heap of whipped cream. It was hardly affordable to me, so I only bought it once in a very long while.

Mr Mode was often seen hanging out at the red sofa chairs beside the mocha stall with friends, drink in hand.

Till now, I like to tease him for being a miser for not treating me to a drink. He said he was shy. Kns. If he had treated me to a drink I would have agreed to be his ‘steady’ right away. HAHAHA. 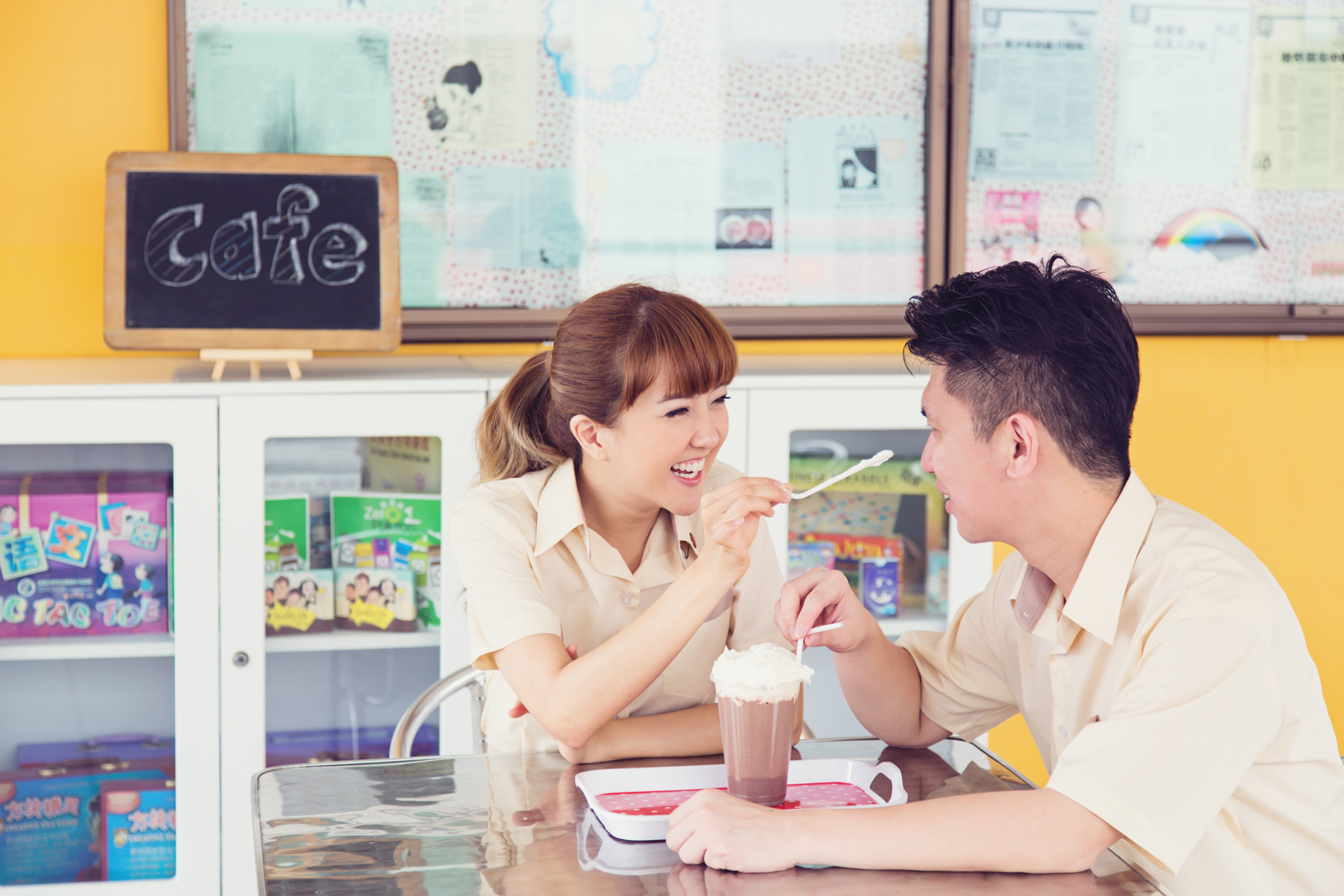 We officialy got together only after graduation, so none of these public displays of affection materialized while we were in secondary school. 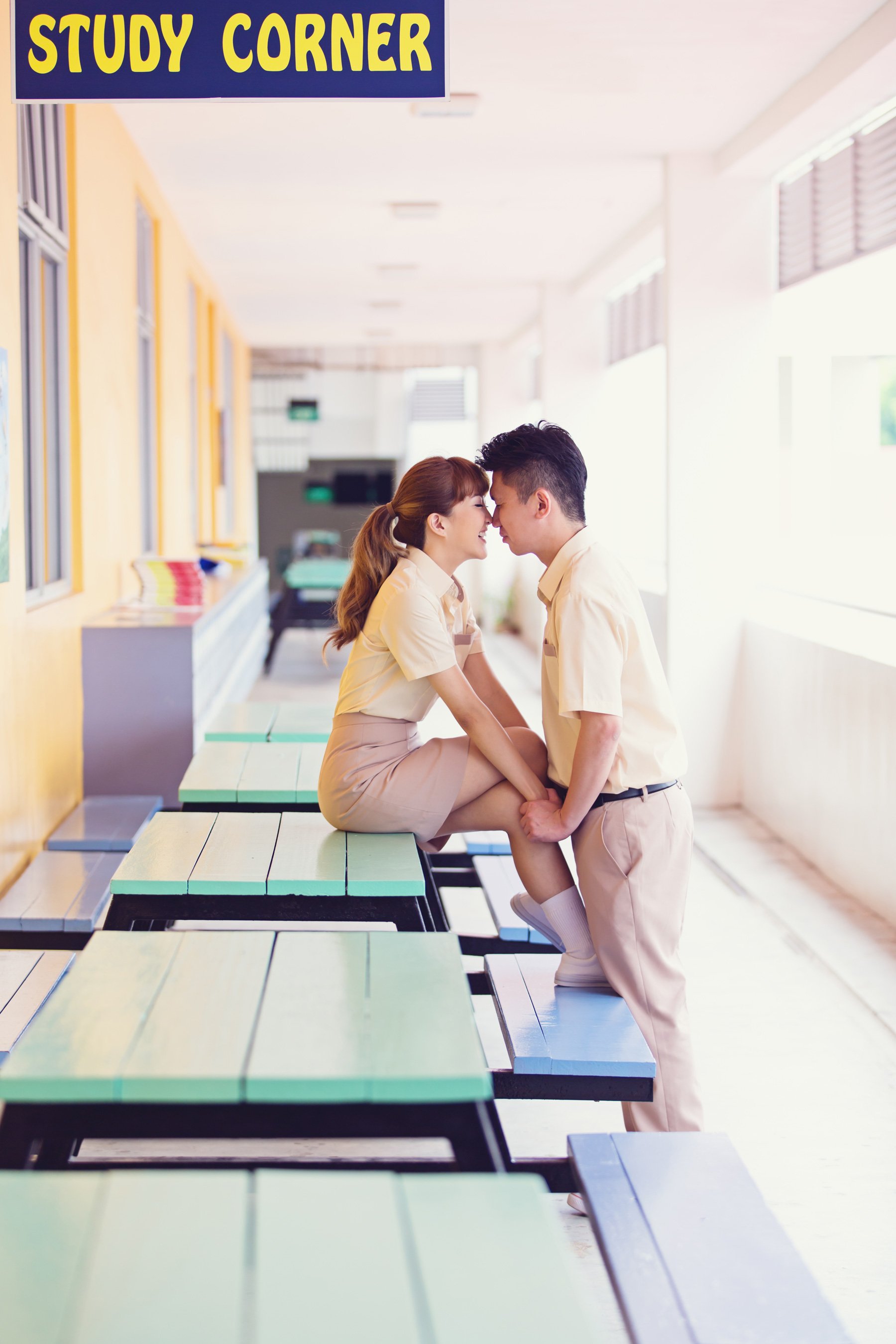 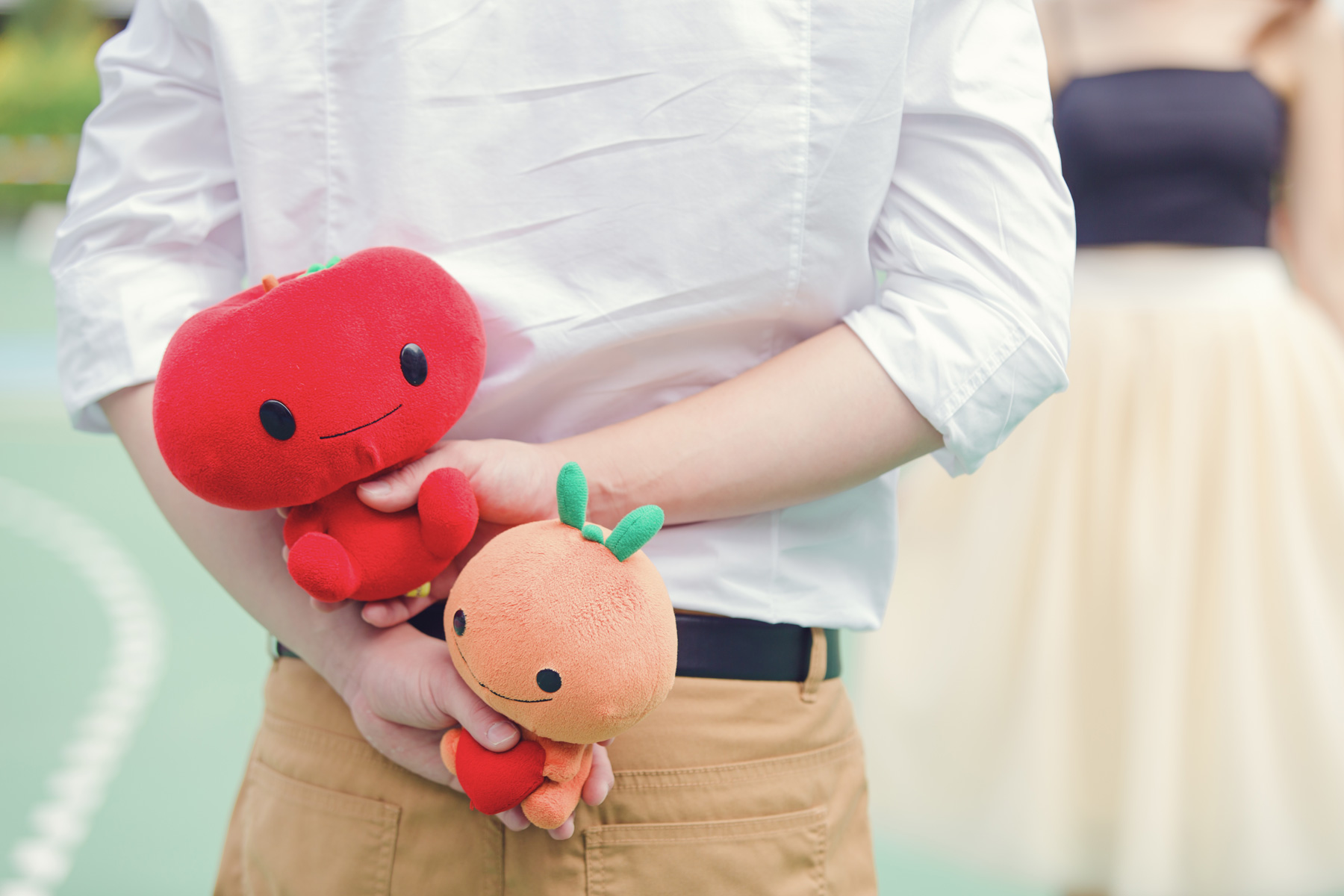 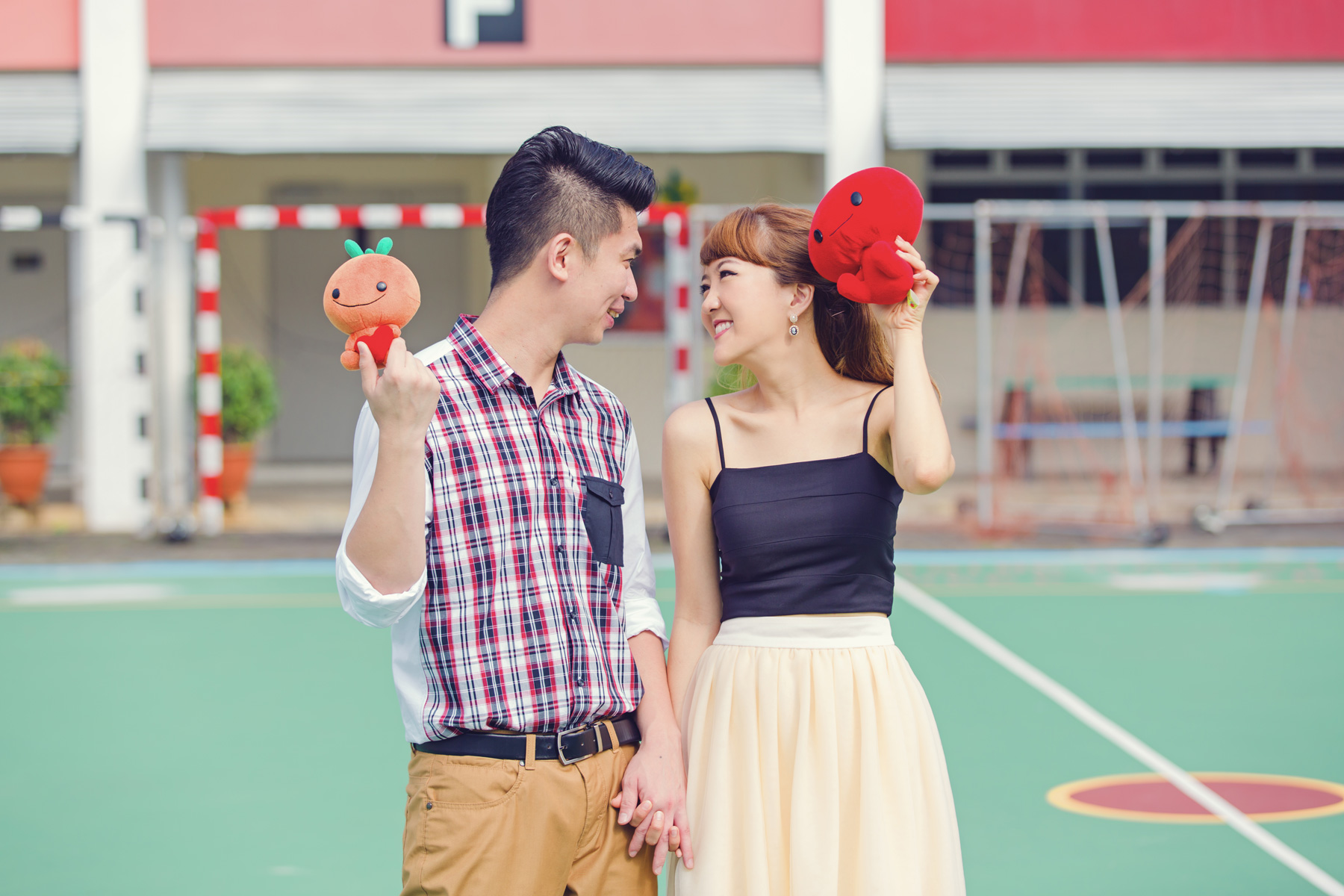 Mr Mode gifted me the Orange & Apple plush toys when he was in the Navy. Apple is bigger than Orange coz he LOST THE ORIGINAL APPLE AND ORANGE. He lost US! 😡 He gave me another Orange on a separate occasion before he lost them so at least there was an orange left. It took me many years to find an apple replacement. Now they just look awkwardly cute together. You can see the original Orange & Apple in the proposal post.

For a long time I could not settle on our wedding theme – vintage garden or back-to-school. The latter flew out of the window the moment we found Alkaff Mansion, it was the perfect place to have a garden wedding and we loved the colonial structure. Together with my wedding planner, we kept to the vintage theme with soft colors like cream, white, pink and a dash of turquoise, and plenty of fresh flowers. I had fresh flowers in my hair too.

When we engaged Confetti Peektures for our actual day photography, Angie offered to take our pre-wedding photos too. I was super excited coz that meant we get to fulfill the back-to-school theme and LITERALLY go back to school too! I wrote to the school to ask for permission and they were happy to open the grounds to us. Thank you! 🙂

The uniforms we wore were no longer in production coz there was a change in uniforms right after we graduated. I kept one set for memory sake, but the top had become so thin I would have looked indecent in pictures.

I scrambled to find a reliable tailor who was also willing to rush out our made-to-measure uniforms in 3 days. I showed her old pictures and chose the colors according to what I remember (I think my memory is a bit off haha). The school crest should rest on the left pocket but there was no way we could replicate the vintage version.

The replicated set of uniforms cost us $300. *ouch!* But I feel it was money worth spending coz this shoot would not have been possible without them.

Later on, we got married in Mr Mode’s grandfather’s kampung.

To be honest, I don’t feel like my life has changed too much ever since we got married. After all, we have been together for about 10 years. That said, there are still many things yet to be discovered about one another and to be explored in our life together ahead.

The block of pictures of us in the classroom where he pisses me off then makes me laugh is very much like how it is in real life. We bicker and have cold wars, but deep down we care very much for one another and most importantly, we make each other laugh A LOT. We are lucky to have found this love at a very young age. 😀 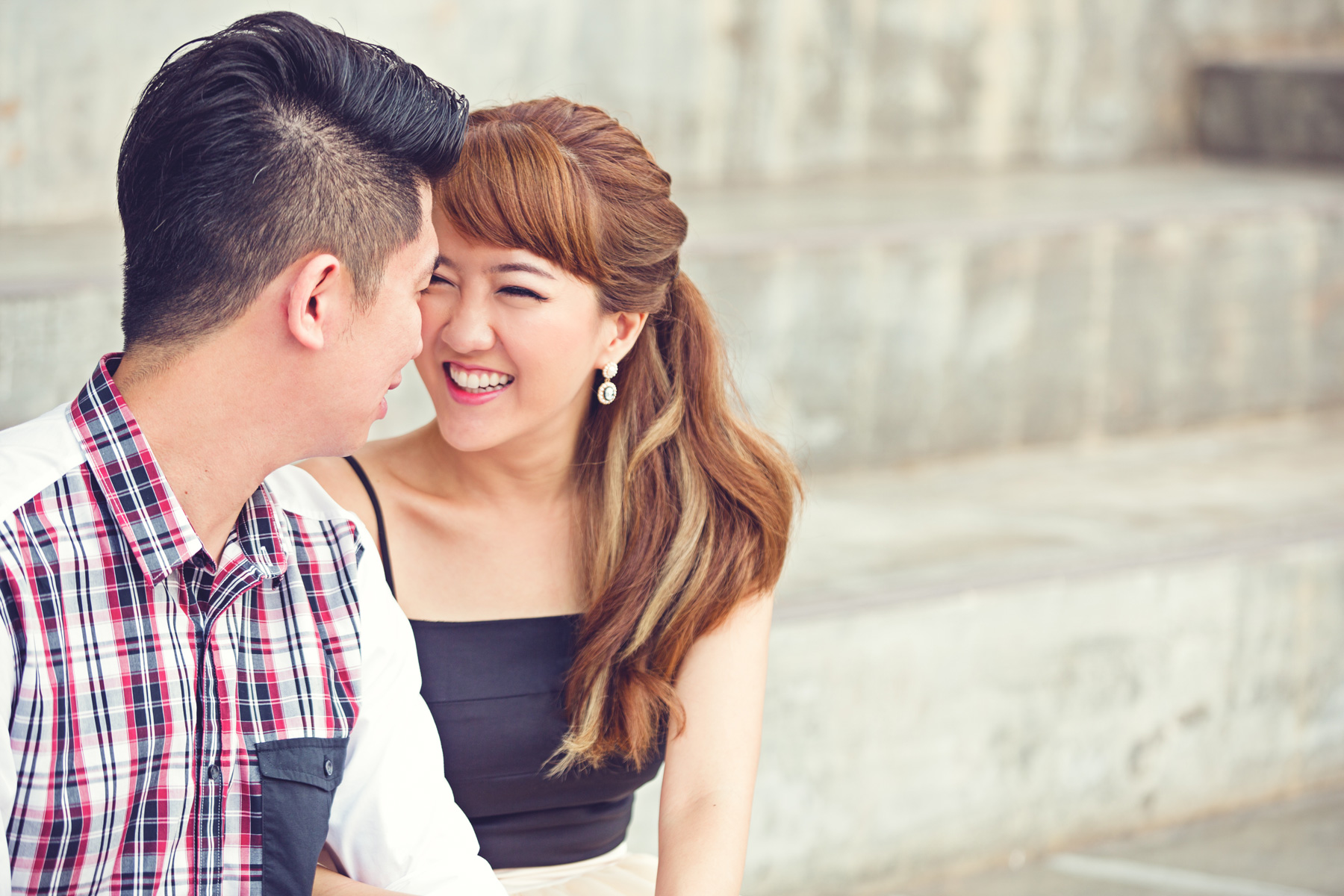 At midnight today, he brought out the cake he bought from Butter Studios earlier in the day. It’s a smaller version of the bottom tier of our wedding cake. And he made me cut the cake together with him like how we did on our wedding day. HAHAHA!! 😆 😆 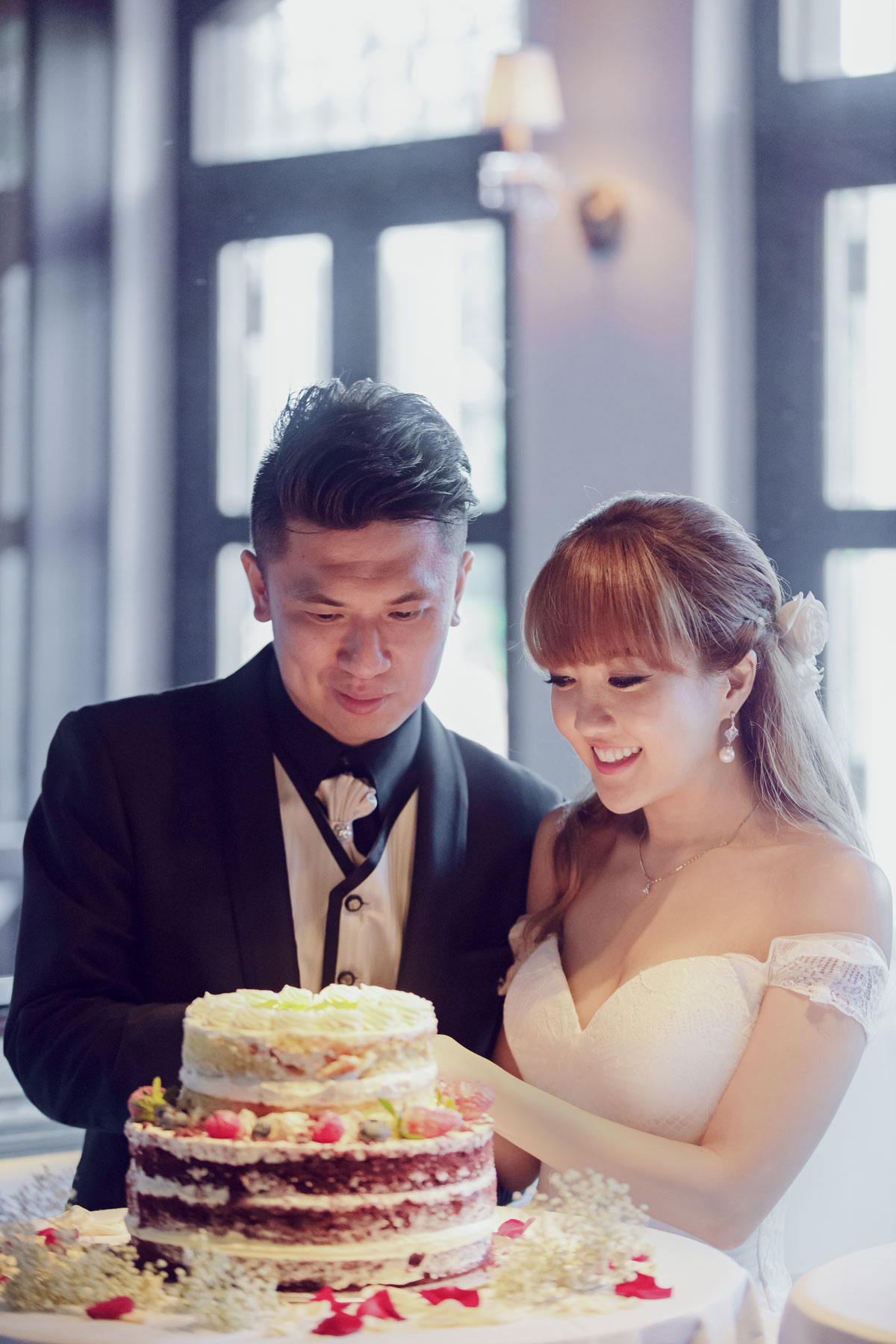 Happy 1st anniversary, my love, and I look forward to many more ahead. 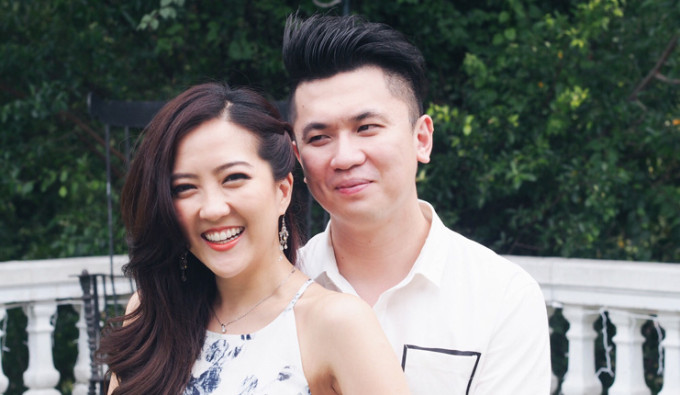 Why We Don’t Celebrate Valentine’s Day 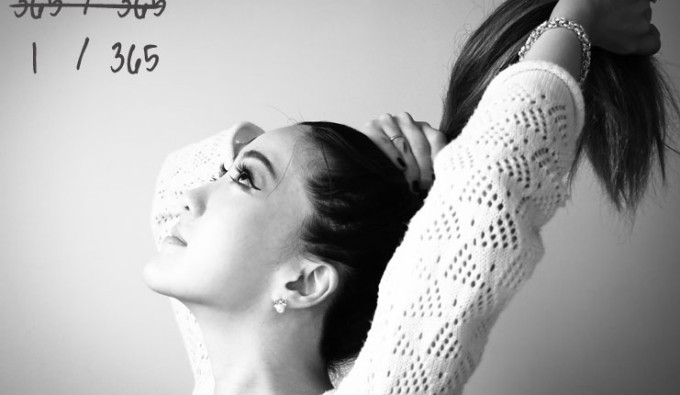 Putting Together The Best Memories Of 2015, That’s How I Cope With New Year Blues 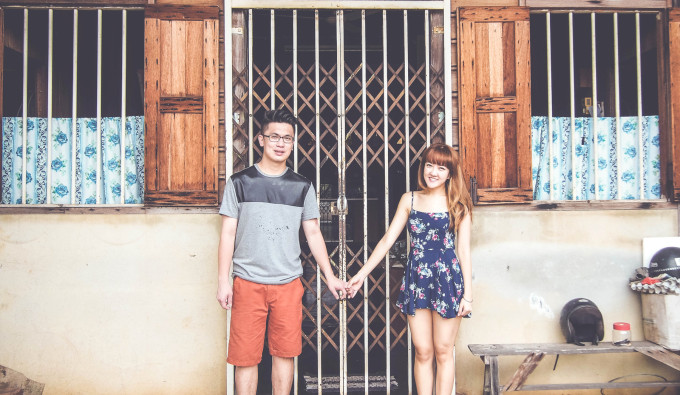 Ah Gong’s Kampung: His Childhood, Our Wedding, My New Family 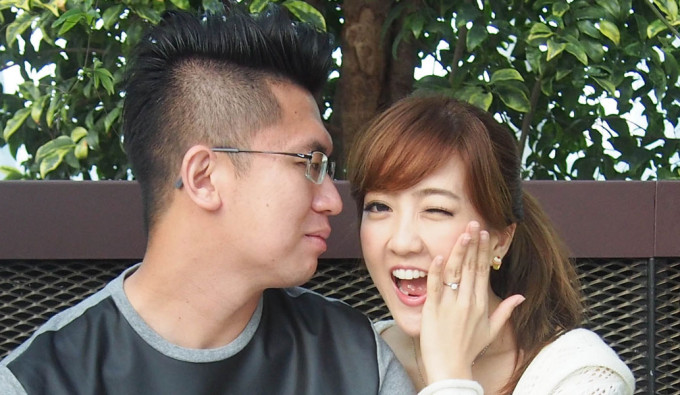 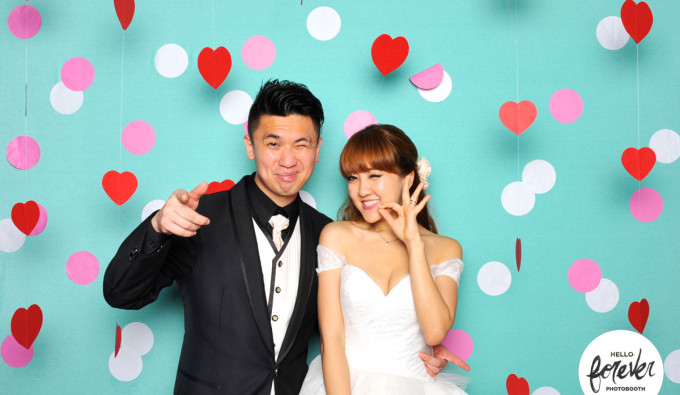 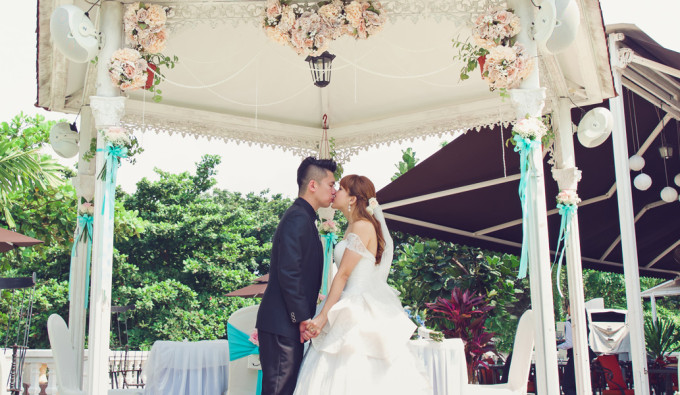 Having a school theme wedding is so cute! Since both of you met during sec school days, I fully support this idea. By the way, the current Xinmin sec sch uniform is totally different from the one you wore for wedding. Even the colours have changed. It would be fun if you can organize a party for all your ex-schoolmates in which everyone wears the old uniform to attend 🙂

Interesting story, now I gotta find me a princess to marry next.

I’m sure you’ll find your sweetheart one day! =)

You two are SO CUTE!!

Oh my! This post was TOO cute! Happy Anniversary to you both! xx

Lawd….this is too much sweetness in one post :’D
Happy anniversary!

OMG. You two are so cute and adorable together! Happy wedding anniversary!!! <3

Thank you! Growing up together is fun ^_^*