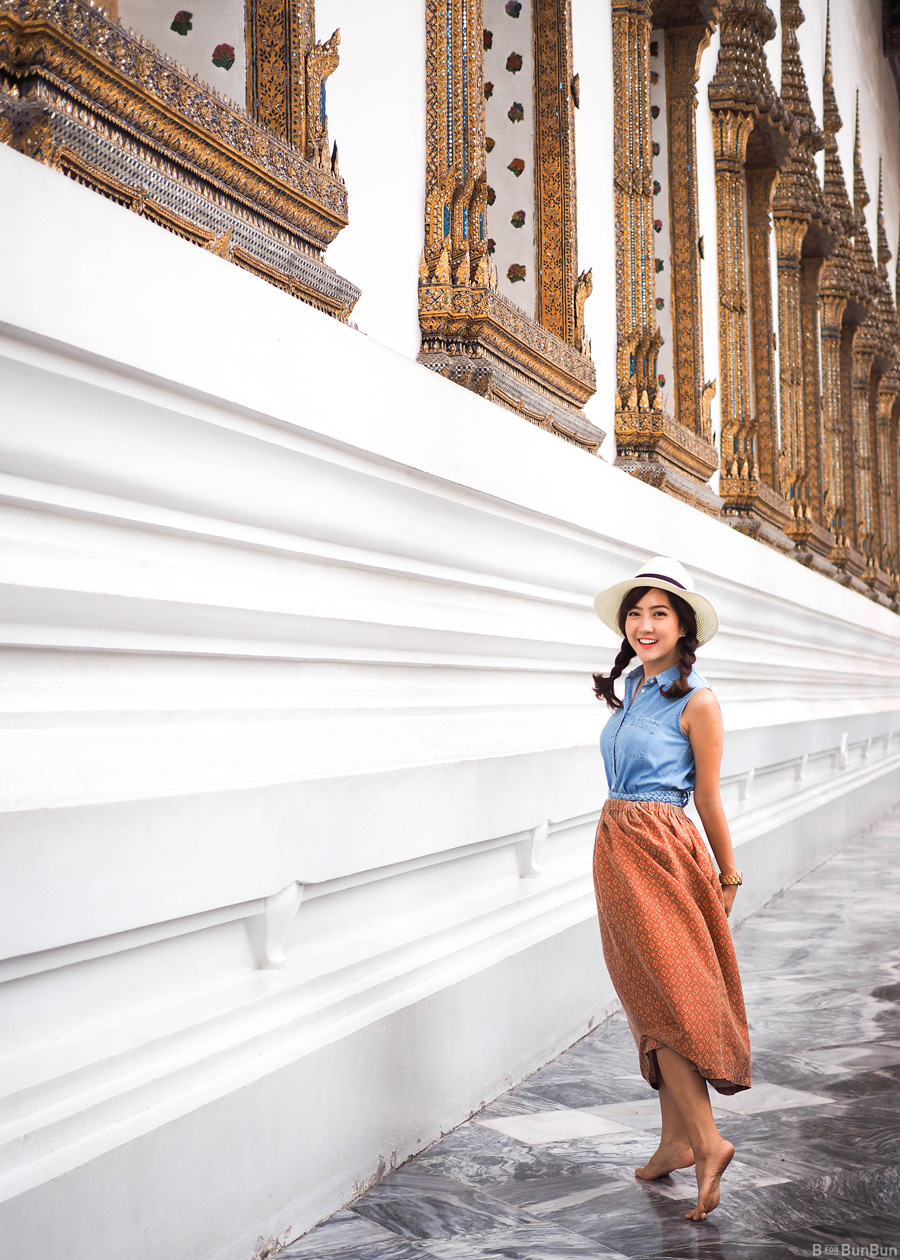 My friends wanted to visit a temple in Thailand, so we decided on the largest and most famous one – Wat Pho, Temple of the Reclining Buddha, aka Golden Plated Buddha. I usually don't fancy visiting temples on a tour but I must say this was a pretty nice experience.

All visitors must wear appropriate clothing inside the prayer halls - no exposed shoulders or skin above the knee allowed. Sarongs and shawls are provided just before you enter, so don’t worry about having to wear pants or long skirts in the Bangkok heat just so you can enter the temple. Being in the presence of this Buddha statue in the main prayer hall gave me this sudden sense of peace, which was surprising considering the heat wave and distractions outside. Inside, everyone was silent and respectful. 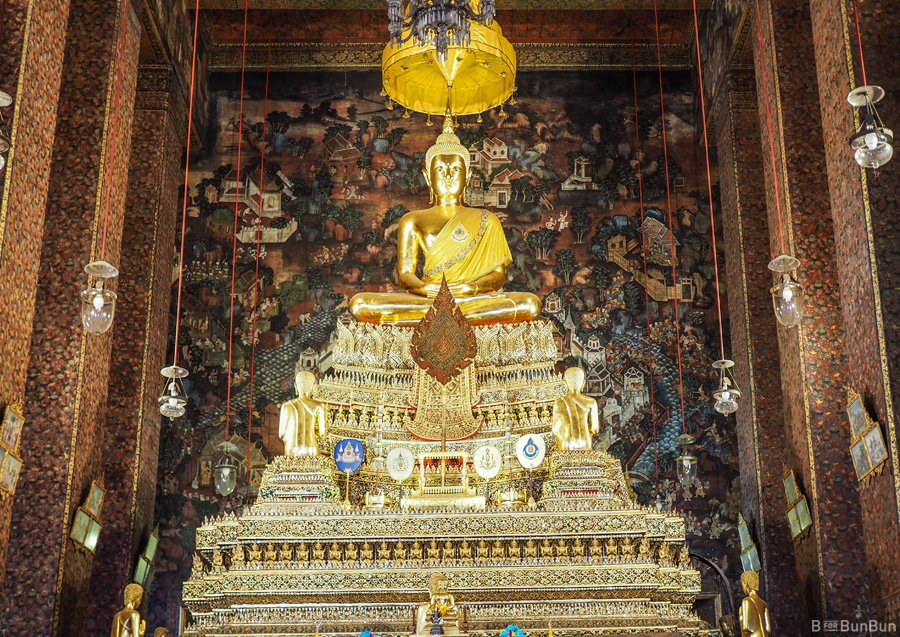 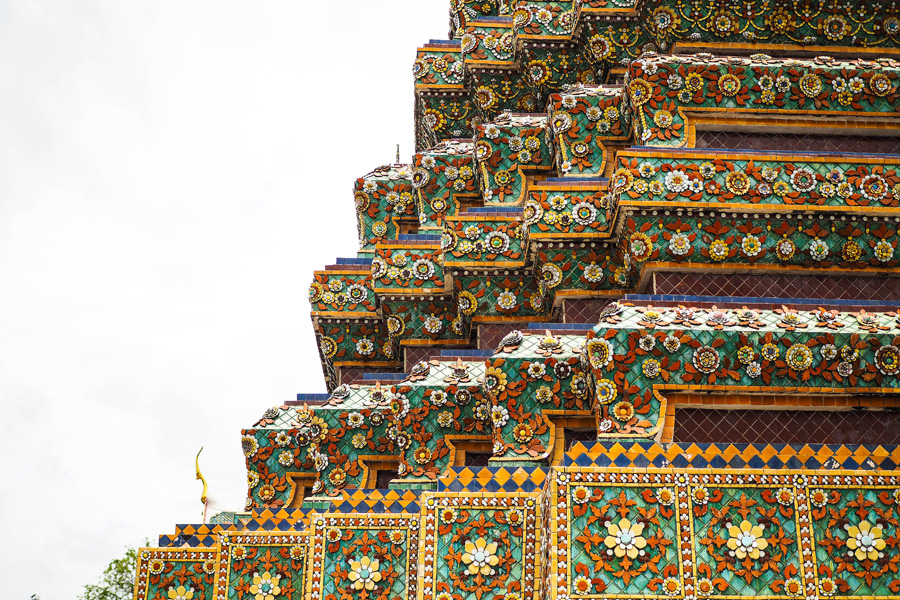 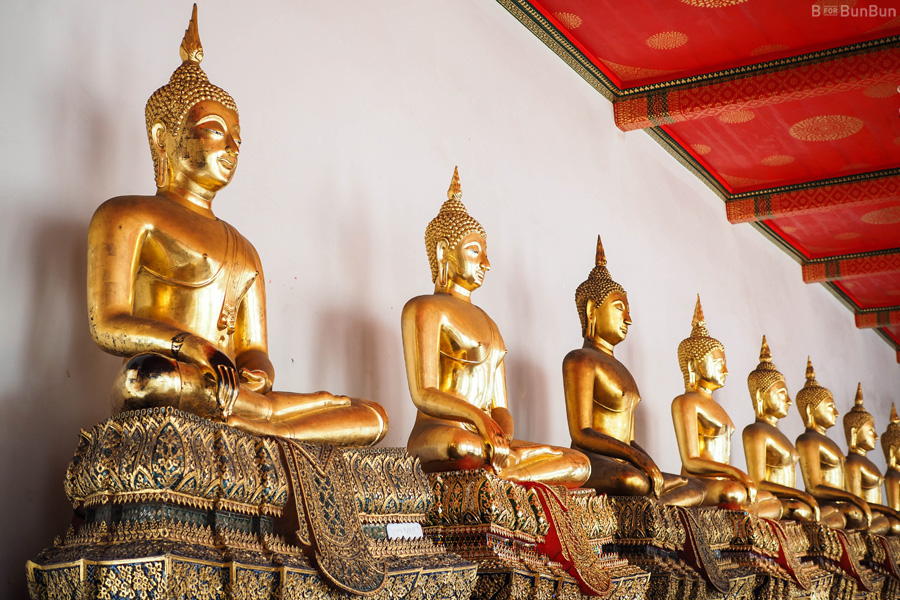 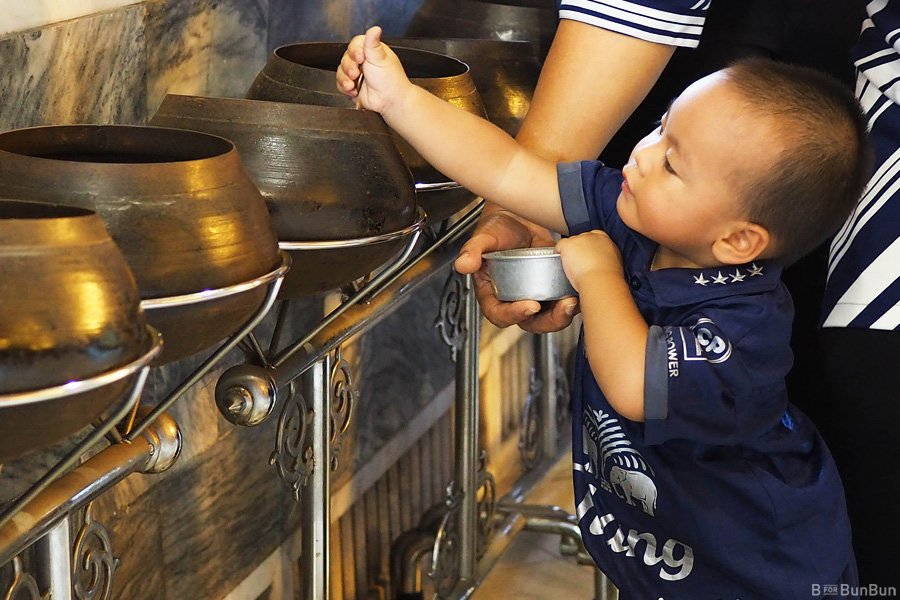 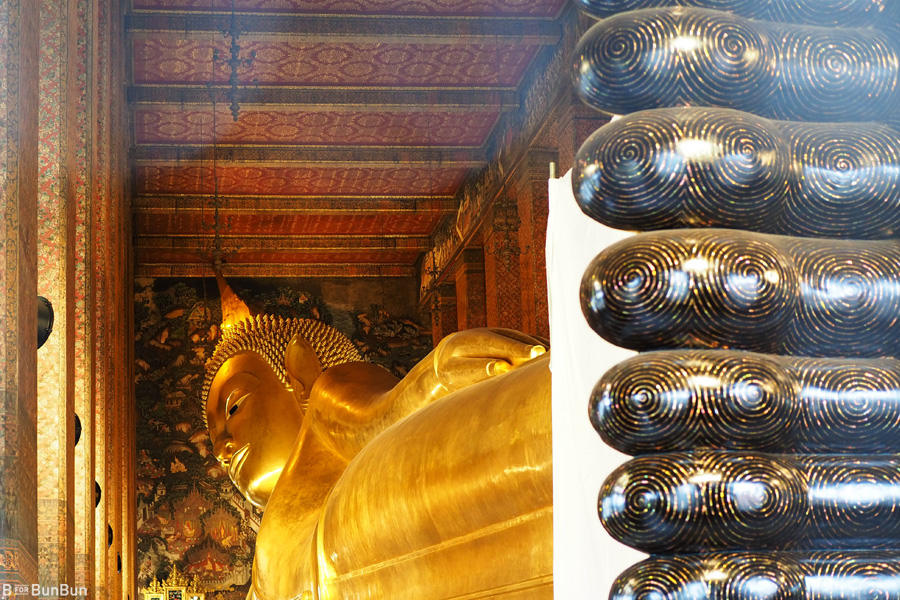 Built in 1788, Wat Pho houses the biggest collection of Buddha images in Thailand. The highlight for most visitors would be the gold plated Reclining Buddha, lying at an impressive 15m in height and 46m in length. The statue is said to show the Buddha at his moment of death and ascension into Nirvana. The Buddha's huge feet are 5m long and decorated with mother-of-pearl divided up into 108 panels. Each panel displays illustrations of auspicious symbols of the Buddha.

The Reclining Buddha, being the main attraction, naturally had the longest queue which fortunately moved rather quickly. However, I enjoyed the walk around the rest of the compound very much too. I was awed by the architecture and intricately detailed murals that cover the walkways and walls. Even if you don’t understand the meanings behind the images, it’s hard not to want to look long enough to appreciate the artwork.

Dotted around the compound are several Chinese guardian statues, some of them donning western top hats. They represent the first Western visitors to visit the East on trading missions. 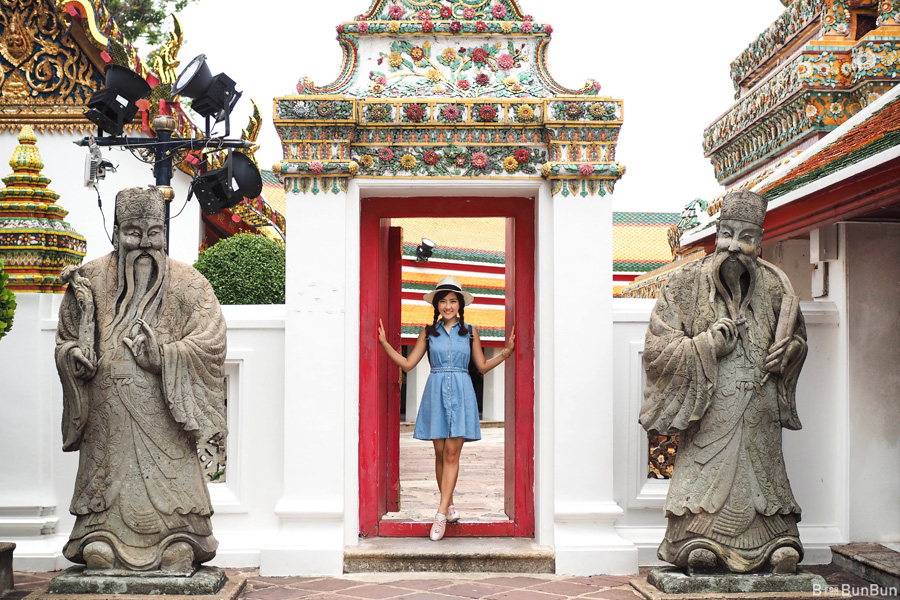 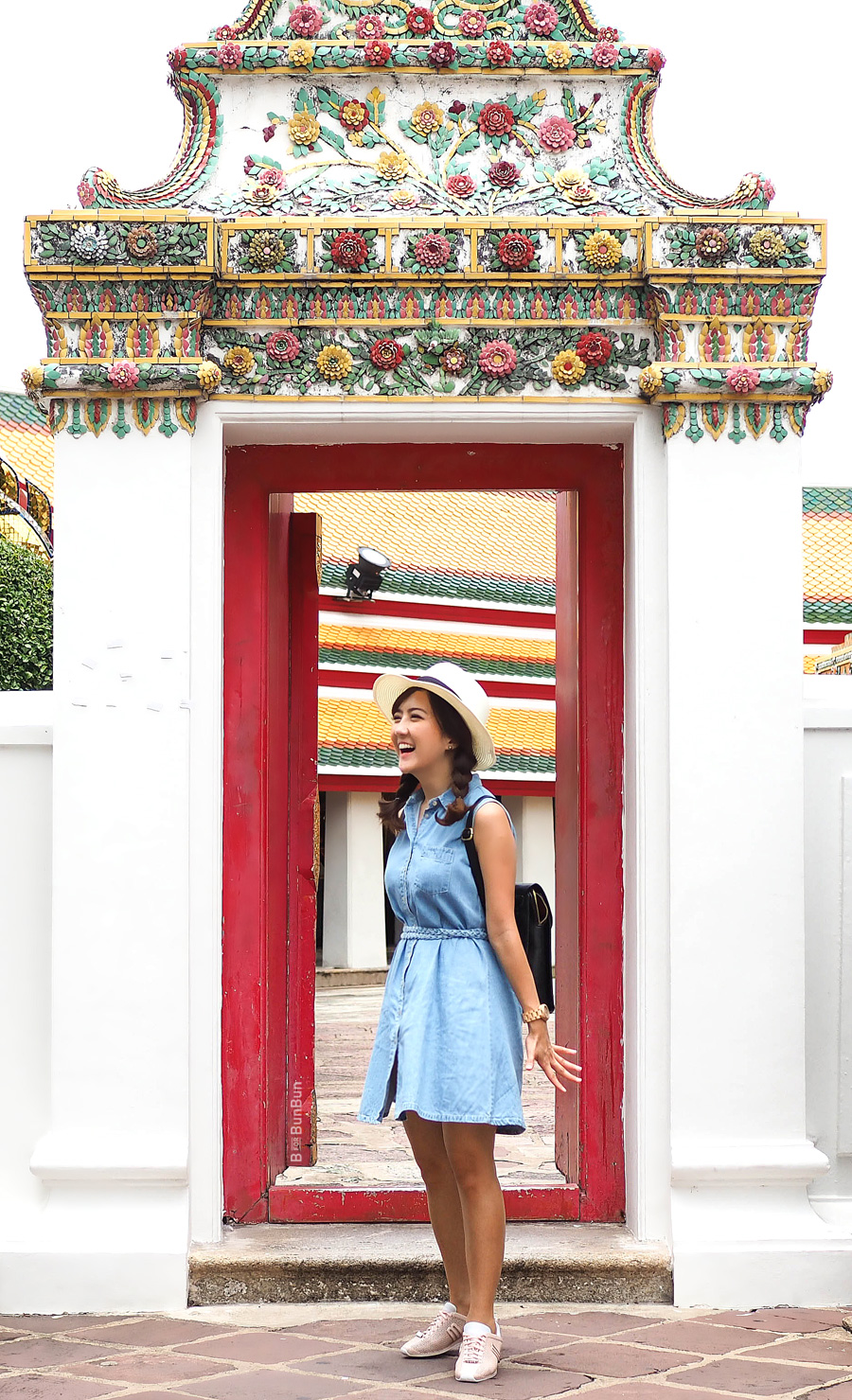 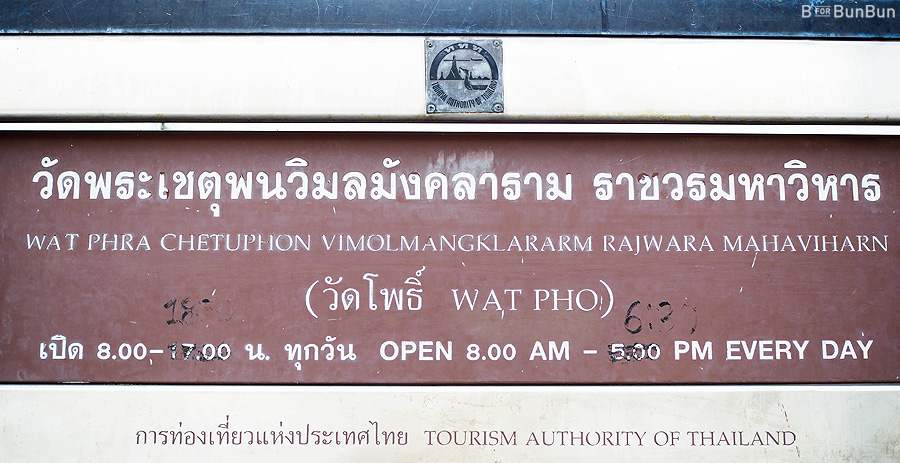 **Be careful of scammers!**

We split 4-3 into two Grab Taxis from our Airbnb apartment straight to Wat Pho. While waiting for the cab to arrive, a man approached us and told us that there was a procession going on, and we would not be able to enter the grounds until 2 hours later. Since we would be stuck here, he suggested that we take a river boat tour, upon which he presented us his colourful brochure of various packages. Most Thais are really helpful and friendly, and I almost got conned by his earnest and convincing ‘suggestion’ to explore his city. Don’t be fooled by such scammers coz when the other cab arrived and we entered Wat Pho, there was no procession whatsoever. Notwithstanding the little glitch, the rest of the time spent at Wat Pho was nice and it's definitely worth a visit. 😀