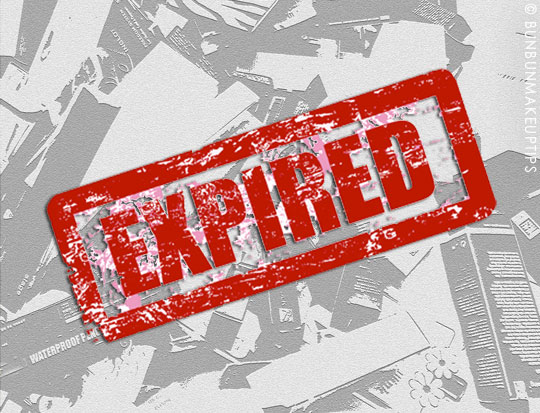 In the spirit of Chinese New Year and the accompanying customary (and mundane) act of spring cleaning, I decided to start a new year on a clean slate by firstly, throwing out makeup products that have too ancient of a purchase date.

Actually, I cannot remember the date of purchase for ANY of my products. When I initially started on my little makeup escapade - that would later culminate into this crazy  obsession - I resolved to writing the date of purchase on each and every product. With constant contact, the ink  smudged – permanent ink or not – and sometimes it was really hard to find a spot to write on.

Then I changed to writing on white stickers but that made the product look really ugly. So I tried writing clear tape with permanent marker. That was the stupidest idea as the ink faded and all that was left was the clear tape. Maybe I used lousy tape, or lousy marker. Lol.

From then on, I simply relied on memory, which essentially means nothing at all since I have so many products it’s impossible to keep track. While the occasional clean-up to get rid of old products helps in ensuring you don’t use products for longer than you ought to, here are some ‘rules of thumb’ that we can all find useful in getting the most out of our products.

You know that little jar with a number and an ‘M’? 6M means 6 months, and it indicates the recommended duration of use after you’ve first opened it.

If the product doesn’t have a Period-After-Opening symbol, exercise the look-smell-free approach. It is high time to throw it out when there’s a change in color or texture, smells funny or different from before, or feels drier or oilier on the skin.

Mascara should be the easiest to gauge whether it has gone bad. Once it starts to dry up or flakes more than it did when it was at its prime, I toss it out. I once used a mascara for longer than was safe and it irritated my eyes so much I count my blessings for not getting any serious infection.

Then again, I honestly don’t follow the general rule of ‘throw out mascara after 3 months of opening’ rule. I mean, who throws out a mascara every 3 months!? That’s not only really wasteful and costly, I believe a mascara can function just as well even after 6 months. Just don’t go beyond a year. >.<”

It is best to exercise the look-smell-feel approach. If it smells funny or looks really weird in texture (maybe it became watery or looks murky), trust your instincts and give it up. And of course, if it causes any negative reaction, throw it away immediately.

Unopened eyeshadows can be kept for 3 to 5 years. Once opened, it is best to throw it out after 2 years. Bacteria loves moisture, so eyeshadows in cream form tend have a shorter life span. Switch up cream ones after 12 months.

Liquid foundations and concealers can be kept for six months to a year after opening. Powders and compacts can be kept for up to 2 years. It is probably easier to identity irregularities with liquid products than powder, in terms of smell, texture and lasting ability on the skin.

Blushes and bronzers can last from 9 months to 2 years, depending on the nature of the product. As always, powders last longer than creams.

Although there are preservatives in most lip products, they can turn rancid after some time. Keep them for a period of 18 months to two years. Lip glosses and lipsticks are rather easier to identify for signs of deterioration.

A change of smell (they tend to smell like crayon), a change in taste, the surface turning hard or rough, are all telltale signs that it’s time to say goodbye.

Nail polishes generally last up to a year. It’s easy to see if a nail polish is nearing its expiry – the formula separates, application is tough, dries slower, etc.

Store Them In A Dry & Cool Place 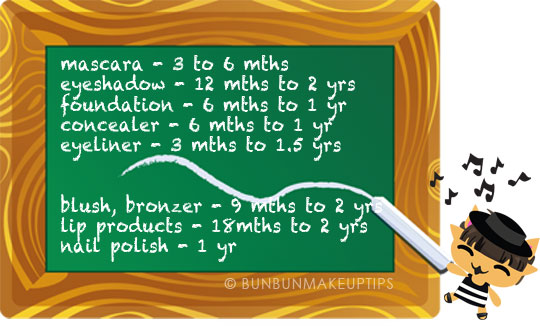 These are really estimated time durations. I usually use my products for longer than what's stated on the symbol, but not wayyyyy beyond. Combine the use of the Period-After-Symbol and look-smell-feel method, and be hard-hearted when it comes to clearing out your makeup.

How closely do you follow makeup expiry dates? What products do you usually go beyond the recommended usage period?