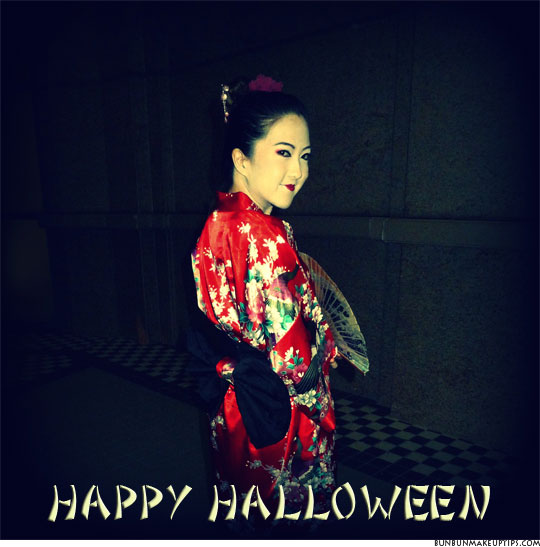 When I was young(er), Halloween was an event I could only fantasize about. I read about it in storybooks and would imagine myself to be a part of all that dressing up in princess-y dresses and cute animal hoodies, walking down large pavements, getting cute little baskets filled with candies from going house to house chorusing ‘trick or treat!’, attending parties in huge houses decorated with cobwebs and skeletons, eating cupcakes with 'R-I-P' and eyeballs fruit punch…

Back in primary school, this magazine named YG (Young Generation) worked on a concept of having monsters and ghouls tell stories and inculcate moral values through games and quizzes, all year round. There was a cute vampire, a green fat monster a scrawny witch and some others.

That was the closest I got to Halloween.

In recent years the Halloween scene in Singapore has grown rapidly and more people are welcoming the idea of dressing up and attending events and parties to scare the sh*t out of themselves, myself included.

The trick-or-treat culture doesn’t go quite well in our culture though since 80% of the Singapore population reside in high-rise apartments.

I was a zombie last year (2010), with a bloody scratch across my face, severe eyebags and blackened mouth. You know, typical of the undead. But the makeup wasn't all that stunning, I used poster colors which faded to a matte and full finish, NYX Jumbo Eye Pencil in Slate for the lips, and black+brown eyeshadow for the eyes. My friend screamed when she saw me and I made some kids cry, but I thought it wasn't all that impressive. 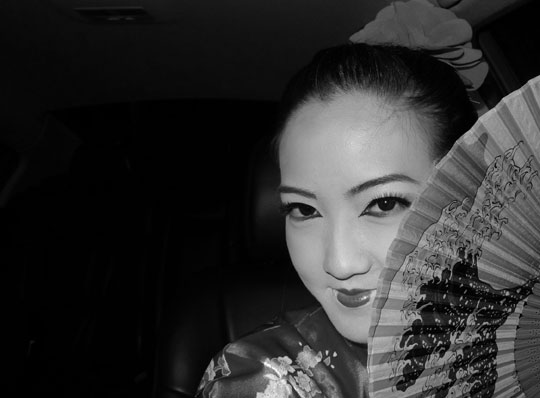 This year I went as a geisha, and I must say I am very pleased with how my makeup turned out. I had strangers come up to me and praise my makeup; some people thought I was wearing a mask, others thought I just pasted some rubber thing on my face and were shocked when I told them it’s pure makeup.

I made full use of the weekend to bask in the celebrations of Halloween, the one day of the year where people can be anything they want, be silly and merry and laugh at themselves.

It was my initial intention to make this post a tutorial in addition to showing some pictures I took of my Halloween weekend, but after editing the pictures, I'll have to do the makeup tutorial in the next post otherwise it will be information overload. 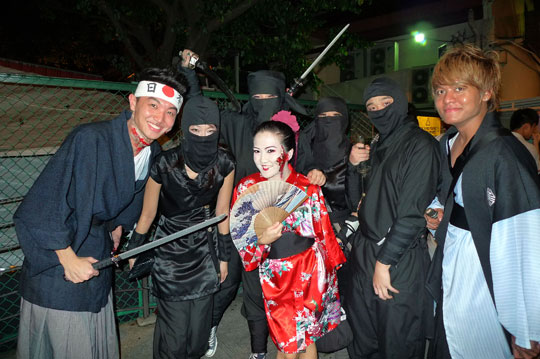 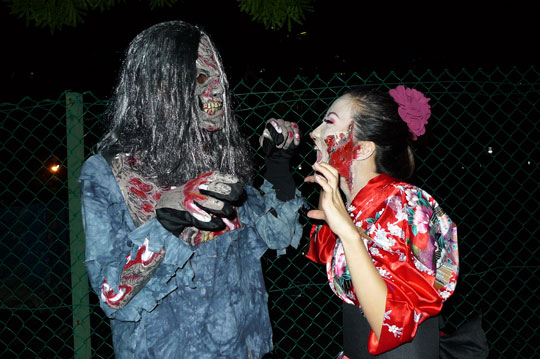 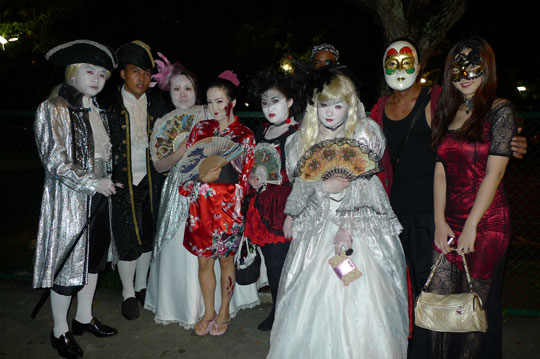 I love groups that dress up in one theme! 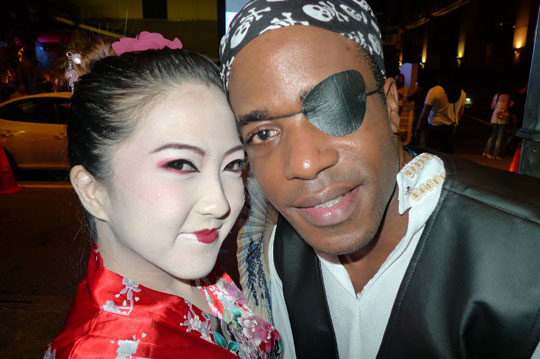 My pirate friend and I. 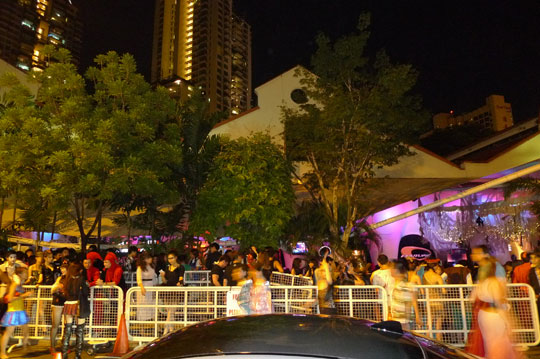 The queue outside Zouk that stretched about 200m beyond the entrance. 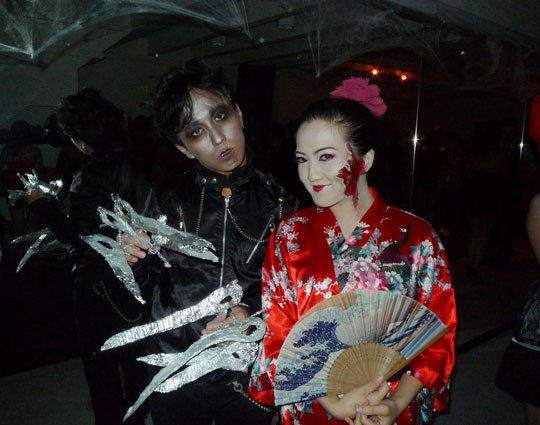 My Edward Scissorhands friend and I. Pretty cool, huh? 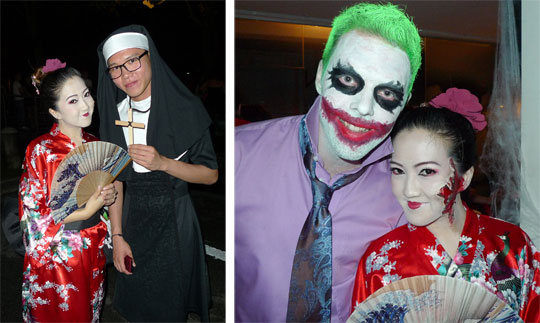 The guy-nun is actually a Buddhist and the Joker's pasty white face made my ivory-white face look almost human. 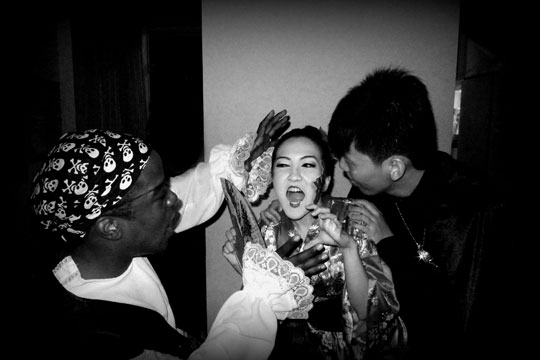 A pastor holding back the geisha who is about to pounce on the pirate?

I'll show in the upcoming tutorial how to get these effects: 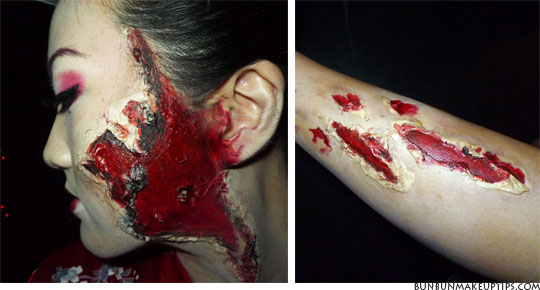 For day 2, I thought of using another set of costume I had in mind - Corpse Bride - but that wouldn't be as comfortable to move in as compared to the kimono. Besides, I wanted to make full use of the kimono since I may never wear it again. So I amped up the makeup, made it scarier and more intense. And reminded myself NOT TO SMILE when taking pictures.

The mood at Sentosa was less joyous than the places I went to on the first day, simply because people paid good money to get scared. So there was a divide between the audience and the crew, who were obviously paid to scare. 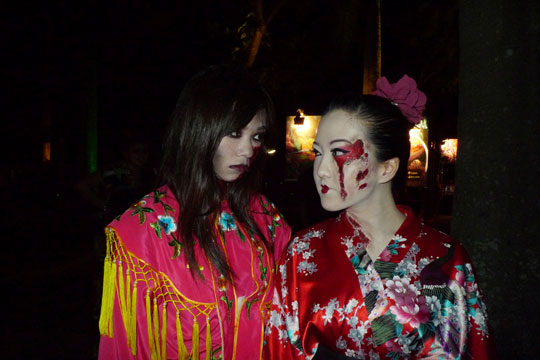 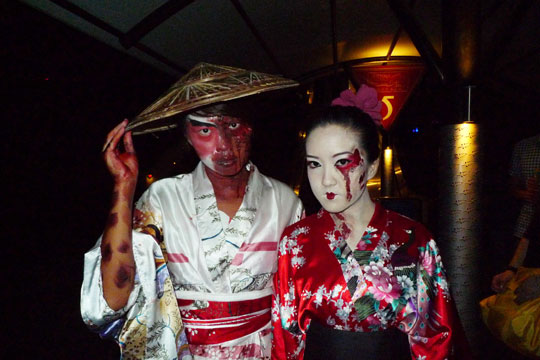 I don't know what is this character. It seems like a fusion of Chinese (because of the opera makeup), Japanese (kimono), Vietnamese (straw hat). 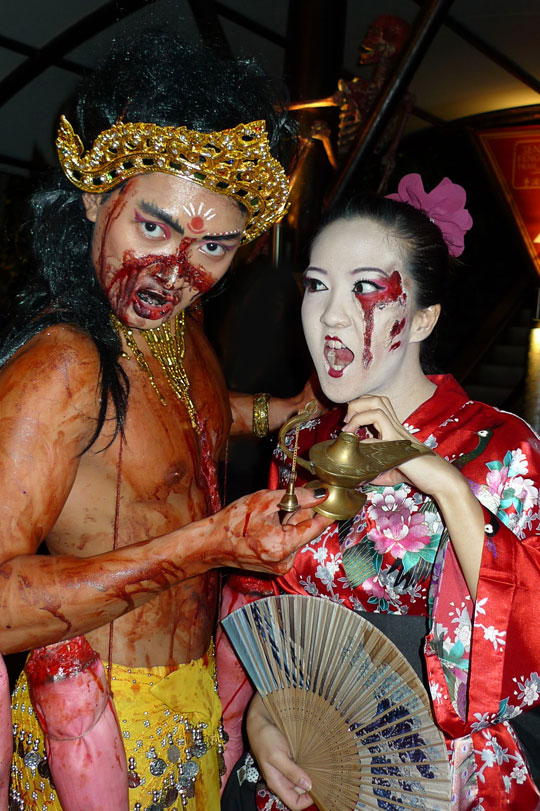 Some bleeding Thai, lamp-holding ghost? I like his gross, decaying teeth. 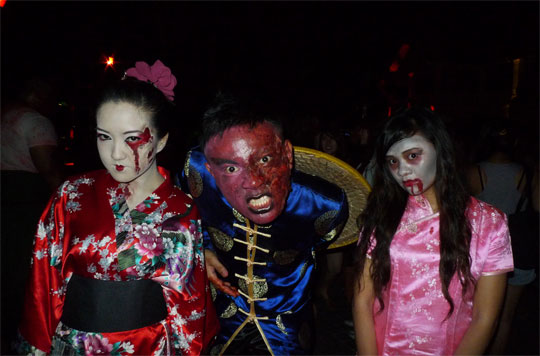 I look very much like part of the crew right, don't I? 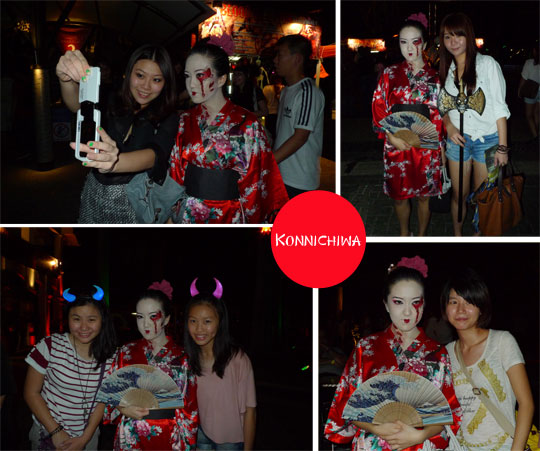 That's why countless strangers came up to take photos with me. Some asked politely, some just put their cameras into my face and clicked away. Lol.

I didn't know what to do initially.

Then I got used to it and just remained a stoic face. Sometimes I forgot, and smiled a little. But a tiny smile with that makeup made it more creepy. So all's well. Lol. 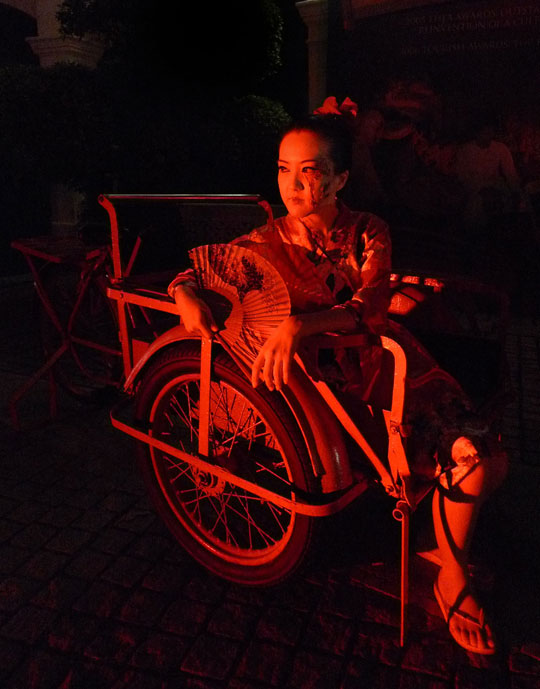 Then I was minding my own business, taking artistic/creepy shots helped by the red spotlights, when I got swarmed again by enthusiastic strangers.

It felt extremely gratifying to hear people coming up to me praising my makeup, the crew were impressed too.

Some people even argued among themselves whether or not I was a staff. I looked the part, but was carrying a bag and a camera. Lol.

One guy came up to me and asked "Could you do me a favor? Help me scare my friend. It's his birthday. Just stand behind him and scare him".

I was like "Er, okie", but his friend walked away too fast so the guy said "Ahh, never mind, he's gone. Thanks"

I had to apologize and turn down the increasing number of people who wanted take a picture with me because my own group of friends had gone ahead to the next trail.

I felt like a celebrity for a night. HAHAHA. 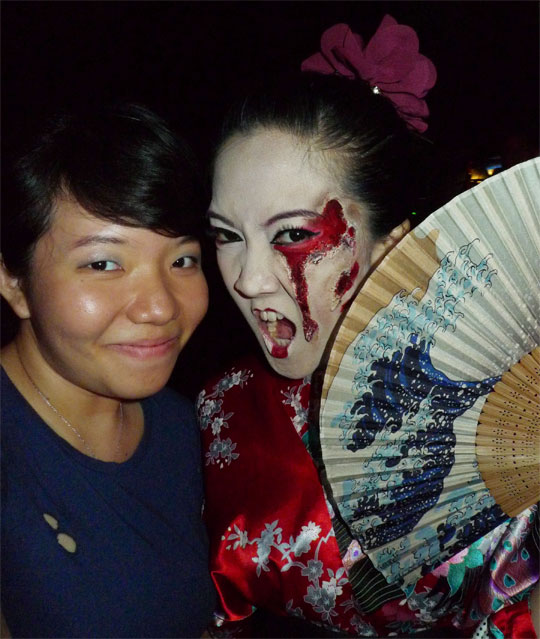 Min, who took all these cool photos for me, and also of me with strangers because she found it really amusing. 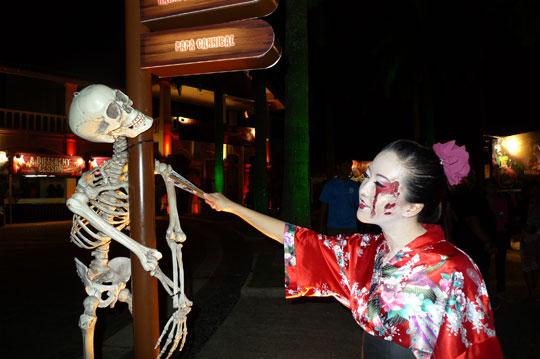 "Hey buddy, kinda under-dressed for the event, aren't you?" 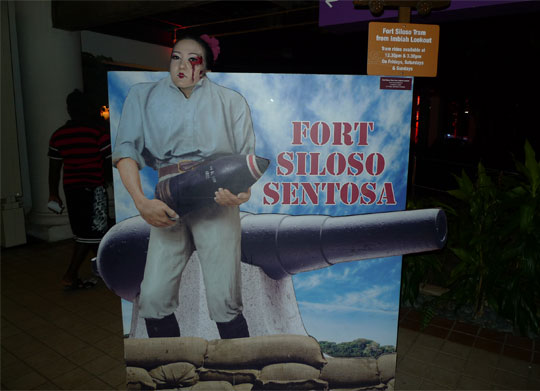 Sorry, I find this picture hilarious. The proportions are way off. And the fact that Fort Siloso was a fort built during the Japanese Occupation makes this shot a whole lot more ironic. 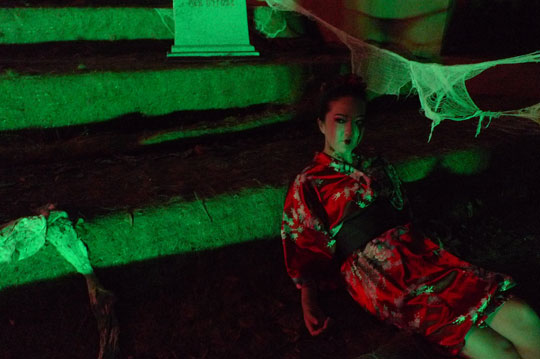 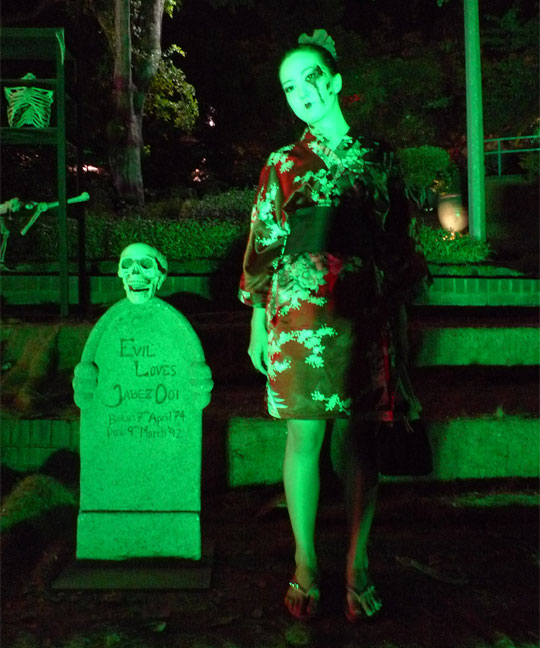 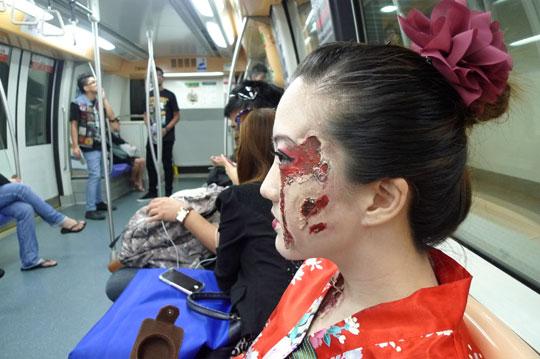 And then I took the train home, in full costume and makeup, no less. Good thing my best friend was with me, otherwise I'd feel very awkward with all the staring.

Quite an experience, really.

I'll show in the upcoming tutorial how I used makeup to create the looks for both days: 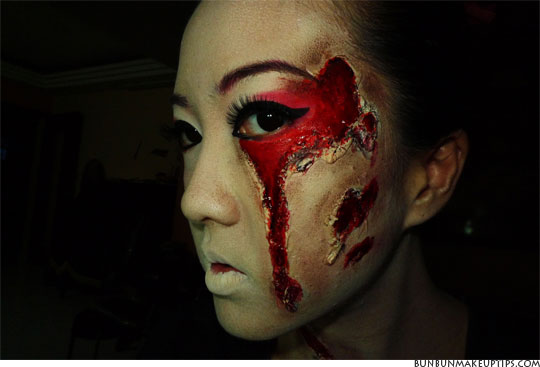 Alright! That's how I celebrated Halloween this year!=D

What did you go as? Where did you go? I'd love to hear your stories! =D 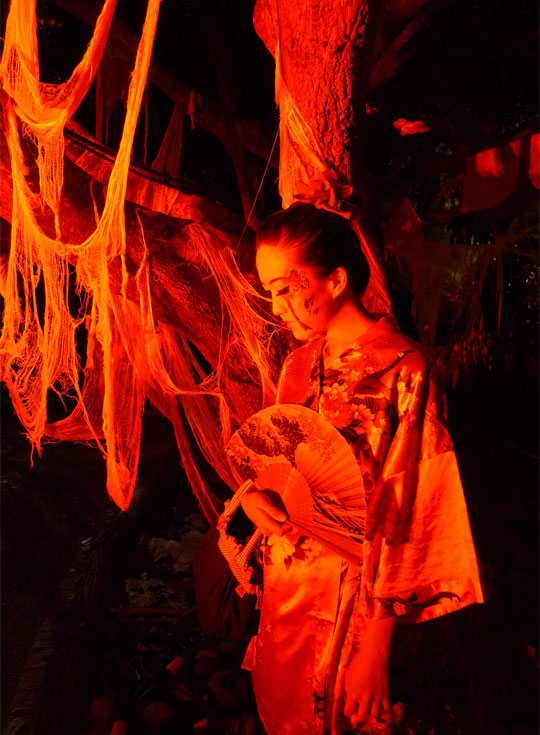 See you in the upcoming tutorial...