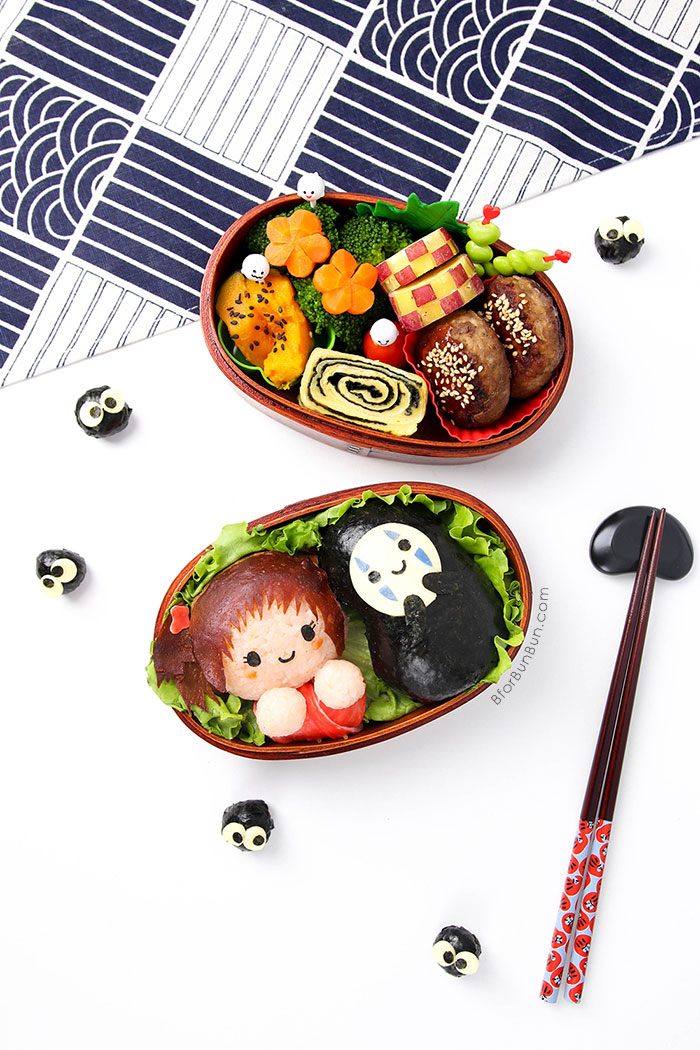 "Let's make a bento with a ghost and not make it scary", I told myself. No-face the Japanese ghost scares me so I decided to force some cuteness on him instead.

The first time I watched Spirited Away was in 2001, the year it was released. Many years later I watched it again, probably on DVD, but both times I didn't quite get the meaning of the movie, or rather, took the plot at face value. I only remembered that it was a beautiful movie, filled with beautiful pictures in every scene. Something I never saw and never would see again in other animated films.

This year I watched it online and at this age, I could fully appreciate the beauty in every frame, the meanings behind the creation of important characters, and the sensitive spiritual and emotional messages behind the story.

Best Animated Movie Ever - Spirited Away

I found it amazing that even 18 years after its production in 2000, Spirited Away still stands apart from its competition. It is completely hand-drawn and each frame is made with great skill and dedication. Every last detail of the characters, creatures, backgrounds and corners were penned by hand - no shortcuts. There are plenty of 'silent' moments in the movie, to allow the viewer to take in the surroundings and just admire the beauty of the moment that Hayao Miyazaki was trying to communicate. Many times I even hit the 'pause' button just because those breathtaking scenes were worth more than a 2-second pan. Spirited Away doesn’t just tell a story, it creates a world.

Chihiro isn't some girl who triumphed over great evil with superhuman powers. She's just an ordinary 10-year-old girl who was suddenly thrusted into a strange world due to her parents' gluttony and is trying her best to adapt to the otherworldly things happening around her, with nothing but determination and careful thinking. And love for all creatures.

The best thing is Miyazaki, writer and director of Spirited Away, made it without a script.

"I don't have the story finished and ready when we start work on a film. It's not me who makes the film. The film makes itself and I have no choice but to follow."

Miyazaki’s Academy Award-winning masterpiece “Spirited Away” was the biggest box office hit of all time in Japan and helped redefine the possibilities of animation for American audiences and a generation of new filmmakers. 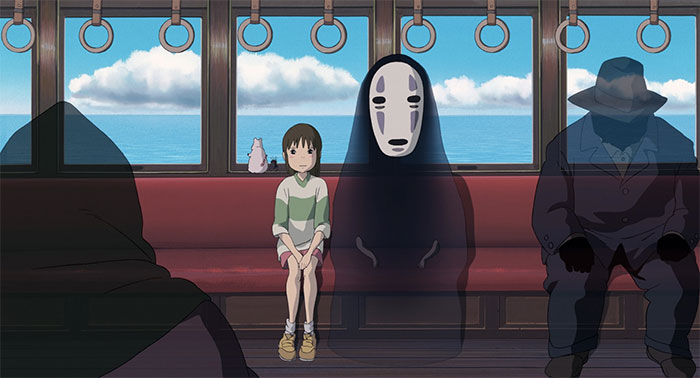 Live action remakes like Jungle Book, Maleficent, Cinderella, Beauty and the Beast, were made as animated films back in the day because there was no way to make animals or characters look like that. But today's movie-making technology makes it more possible for filmmakers to convert animation into live-action fare. Disney is continuing its remake trend with many more live action movies in the pipeline. Lion King, Aladdin, Dumbo, Mulan, Lilo & Stitch, Lady & The Tramp are some animated films to be launched in 2019, either in cinemas or via digital streaming service. EXCITING!! 😀

I'd be stoked but also quite afraid to watch if Spirited Away ever gets turned into live action some day. I can deal with humans taking on the roles of Chihiro, Haku, and the bathhouse workers, but to see real-life beings of No-Face, Radish Spirit, River Spirit, and other floating spirits, I think it's gonna be more like a horror film to me! It will be interesting to see Yubaba, oversize-headed witch who runs the bathhouse, acted out in real life though.

Live action films these days are not just mere copies of animated movies; they incorporate familiar storylines while mixing unique twists in to allow the audience to experience the story from a different perspective. Like how we got to know about Maleficent's backstory from her point of view. Turning Spirited Away into live action may give more body to Haku's backstory and perhaps elaborate more on life with (or without) Haku after Chihiro left the ghost town. I love 'happily ever afters'.

Does No-Face Scare You?

It scares me all the time. There's something incredibly creepy about the expressionless mask.

No-Face is a lonely spirit with seemingly no connections to the other spirits. He is capable of reacting to emotions and ingesting other individuals to gain their personality and physical traits. When he's in the presence of Chihiro and Zeniba (Yubaba's kind twin), he's docile, nice and helpful. But when he entered the bathhouse and witnessed the greed and corruption of the workers, he adopted their personalities in an attempt to change himself to be like those around Chihiro so that she may like him more.

He was usually ignored by everyone but Chihiro's kindness and politeness towards him gave him joy and he tried to do things to please her. Like stealing the bathhouse tokens, and offering her gold thinking it'd make her happy since the workers all seemed gold-crazy. He didn't comprehend why Chihiro didn't like his 'gifts' like everyone else.

I love how No-Face found his talent in knitting at Zeniba's house. You could see expressions of peace and joy on his face when Zeniba complimented him and his eagerness to stay with her when asked to. No-Face finally felt belonged.

Wanting to be noticed, liked, loved, and belonged - doesn't that make all of us?

I feel like I relate to No-Face more than any other character in Spirited Away.

How To Make Spirited Away Bento

Alright! Let's get started on the tutorial.

The 'Soot Sprites' are magically-conjured creatures that work in the boiler room with Kamaji, the boiler man. They are small round balls made from soot and throw coal into the fire to help power the boiler. I made them as decoration around the focal bento characters. 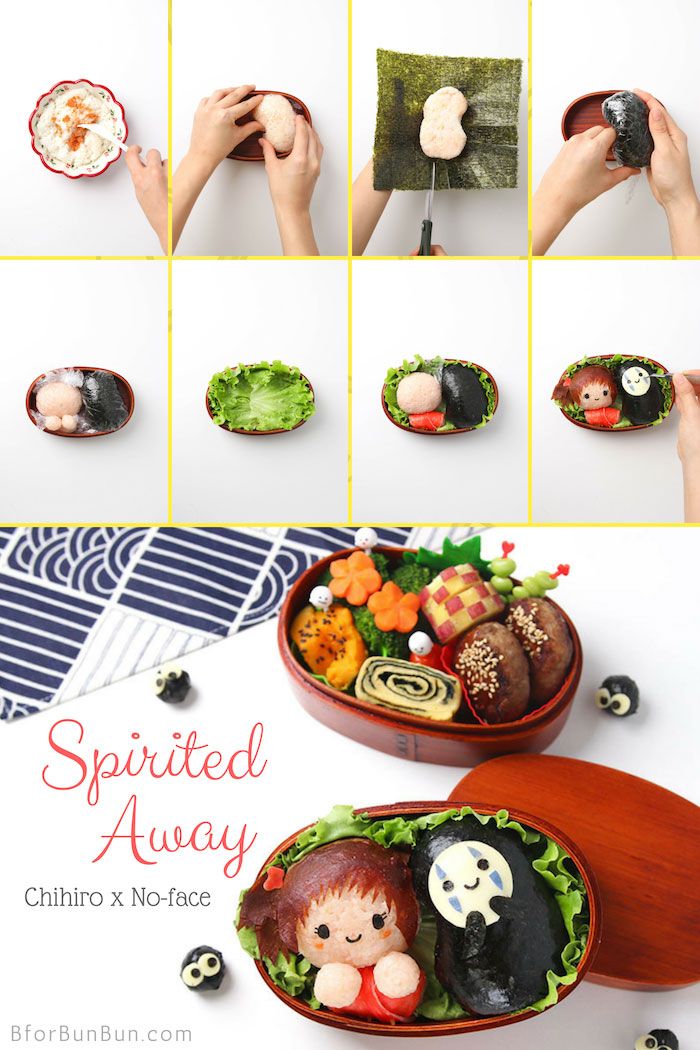 All side dishes were made from scratch in advance, frozen individually, then reheated for the bento. The Japanese hamburger is super yummy. Shall make a recipe post for it someday! 🙂

I hope you liked this Spirited Away Chihiro And No-Face bento! 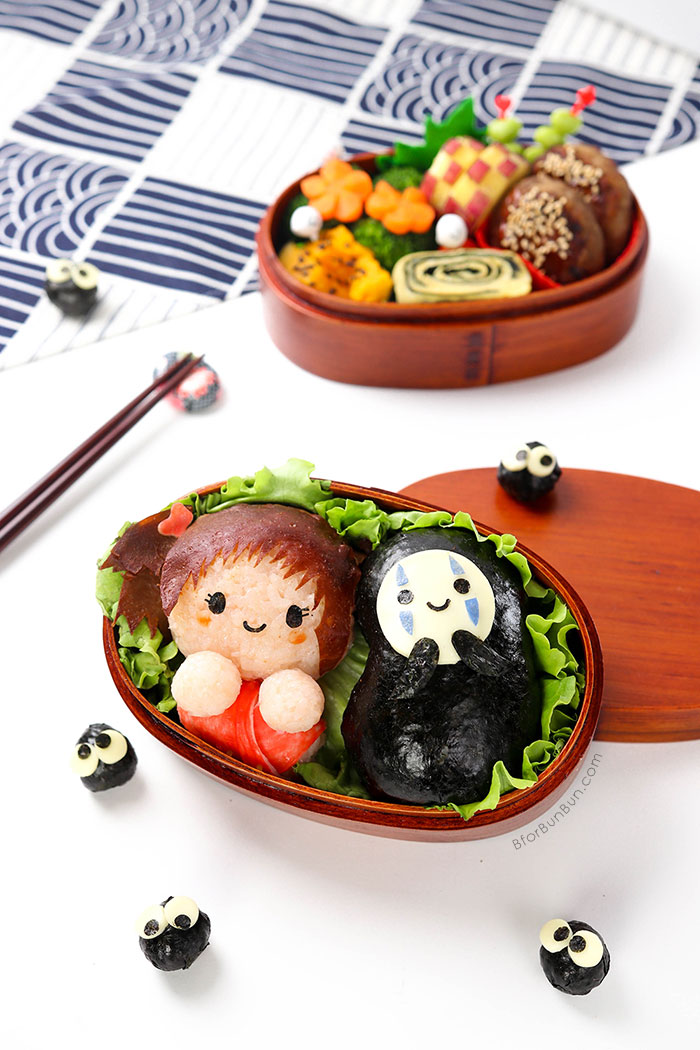 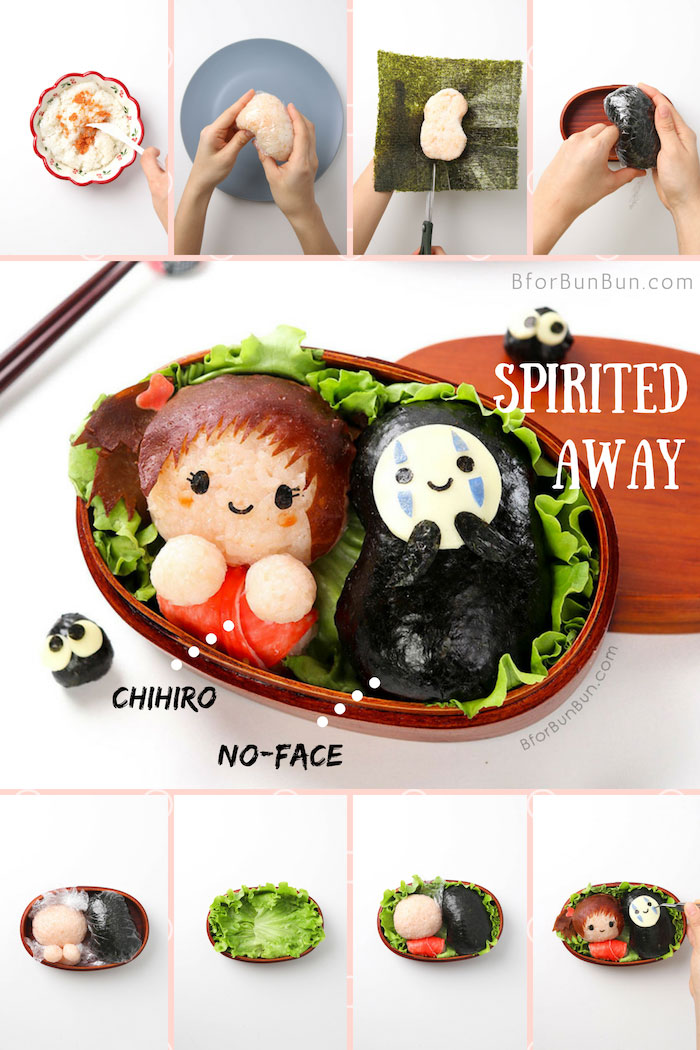 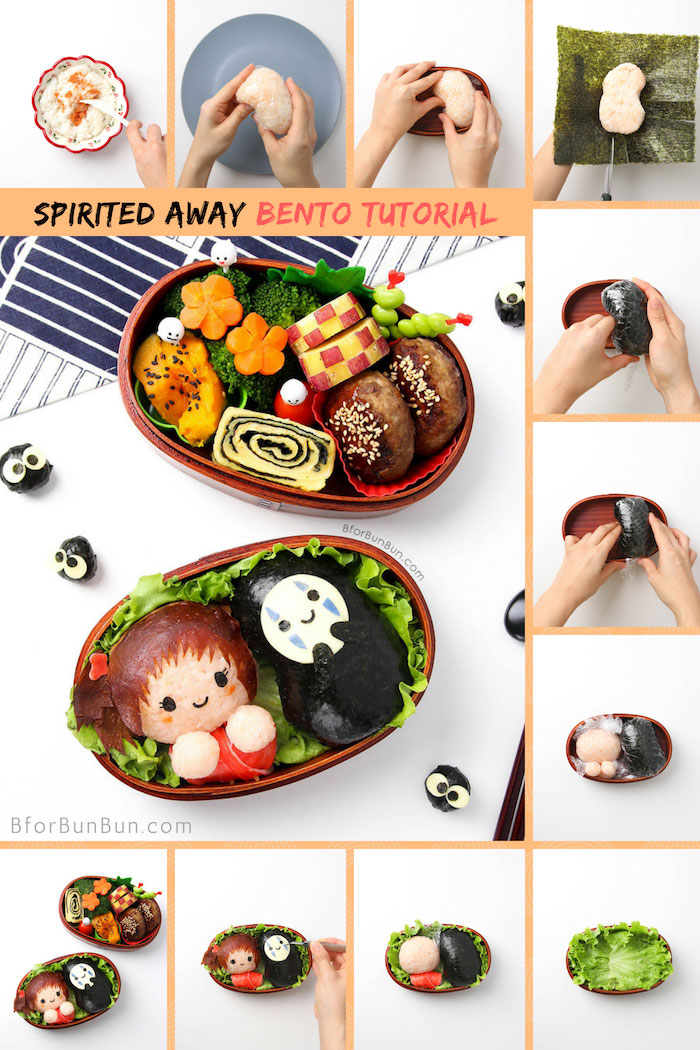 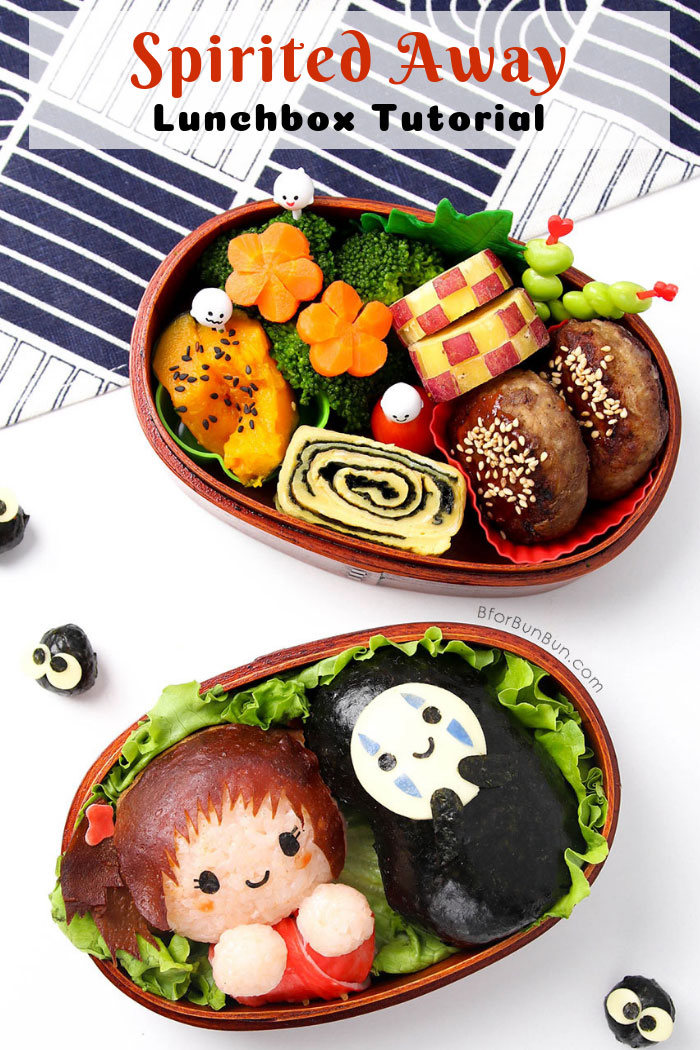