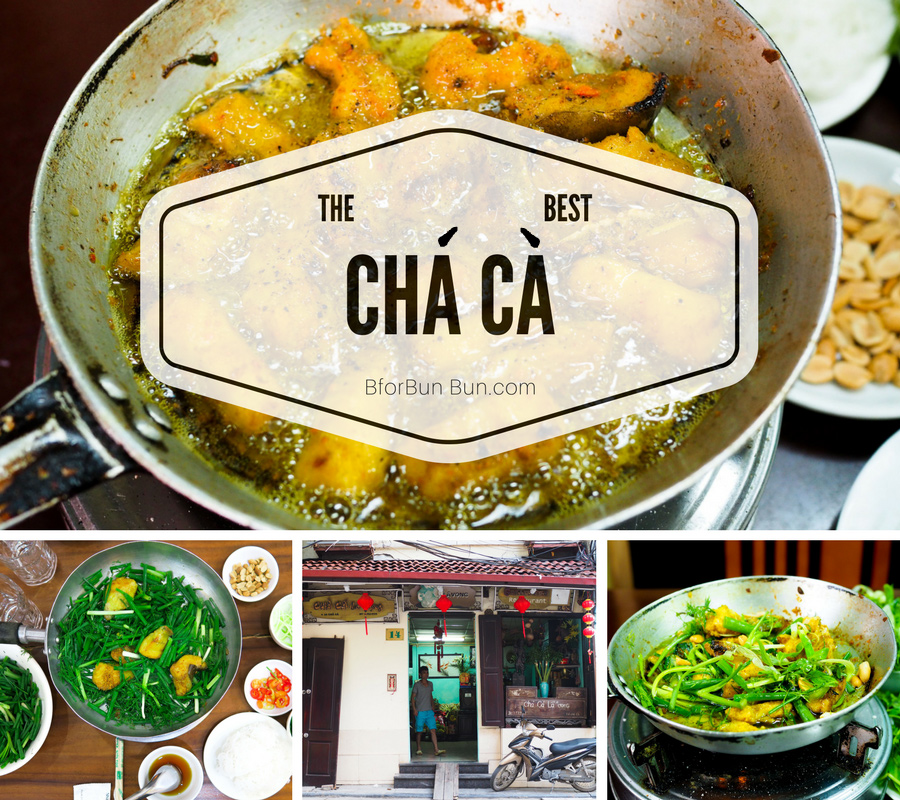 "Cha Ca! Fried fish!", exclaimed the hotel receptionist with much enthusiasm when we asked her to recommend her favorite food in Hanoi Old Quarter. She specifically mentioned Cha Ca Thang Long at 21 Duong Thanh and mapped it out for us, reminding us, "MUST GO!".

Cha Ca is Vietnamese Style Fish with Turmeric & Dill, and despite it being an Asian dish, I've never tasted anything quite like it before. Dill is seldom used in Asian dishes, so having an abundance of that in one dish was intriguing.

Trying local Hanoi food is one of the Top 10 Things To Do When You Visit Hanoi, so I'm glad we had time to try as many dishes and repeated some for comparison.

A highly recommended dish should never be had just once, so while keeping one recommended place in my pocket, we ventured to a 100-year-old Cha Ca restaurant that is often a must-not-miss in guidebooks - Cha Ca La Vong. 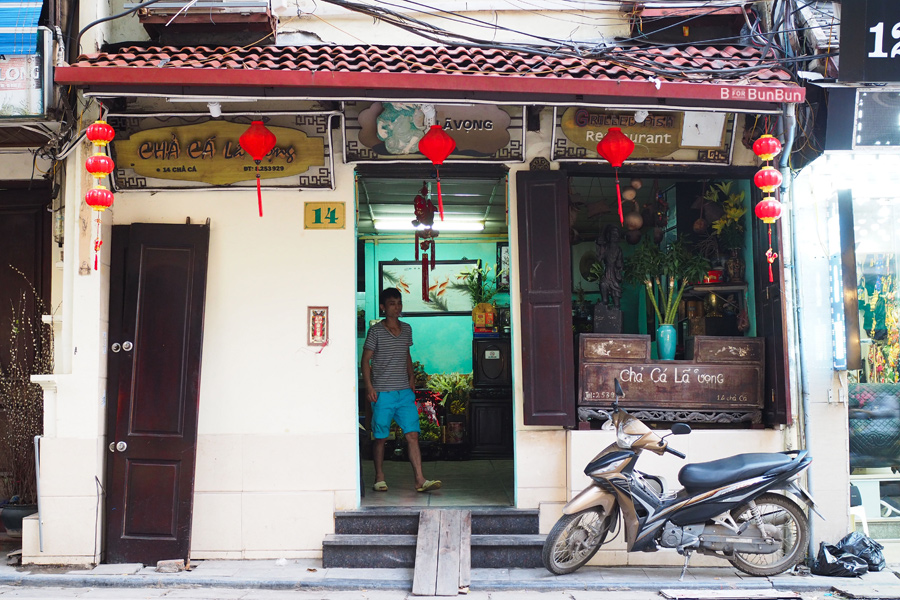 Wow, I am amazed at how nothing is parallel to anything in this picture. Everything is crooked - roof, signboard, steps, door - making it all the more charming with that rustic, old-school feel. Oddly satisfying. Unlike its neighbors with loud signboards and touting staff, Cha Ca La Vong is anything but ostentatious. You'll almost mistake it for a residential unit, with the first level displaying black and white pictures of ancestors and old paintings.

Indeed, the interior makes one feel like one has gone back in time. I wouldn't be surprised if everything in here is older than me, or my mum, or our ages combined. 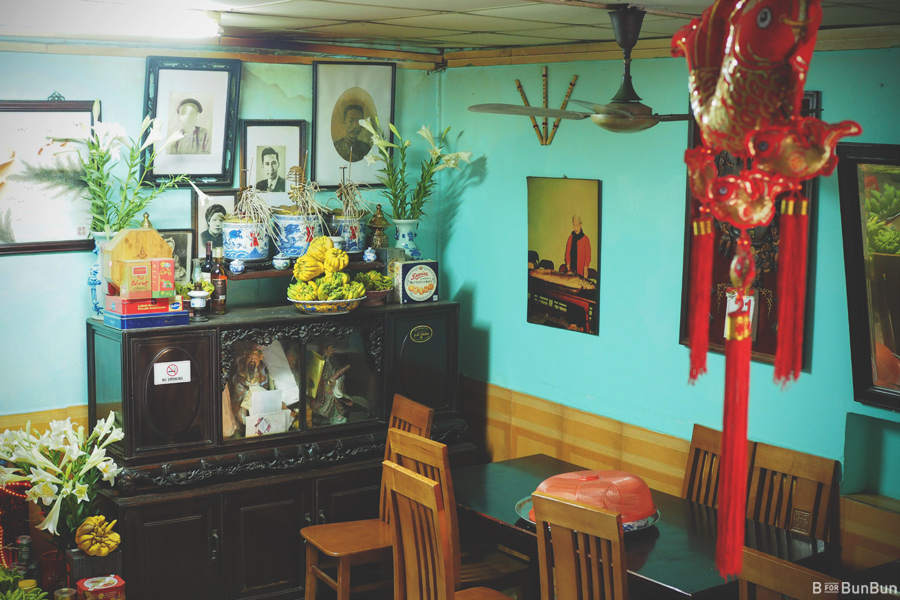 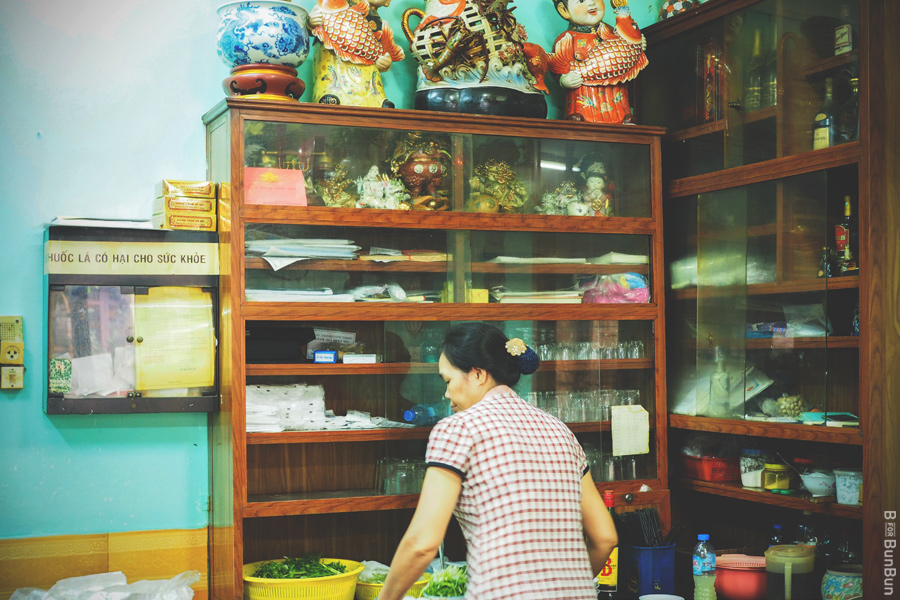 We arrived at a non-peak timing of 1630 and the only other patrons were a group of Koreans. More streamed in later, and none were local. Interesting, coz the staff who served us couldn't speak a single word of English, or didn't bother to try, and simply gestured to us tourists to pour all the ingredients on the table into the pan.

She handed us the menu in silence, which bore the single, iconic dish on the menu. It cost VND 170,000 (about SGD 10) per pax, and strictly per pax. No sharing, no negotiating allowed. It's like they know you're going to eat it ANYWAY, so might as well earn from every mouth. 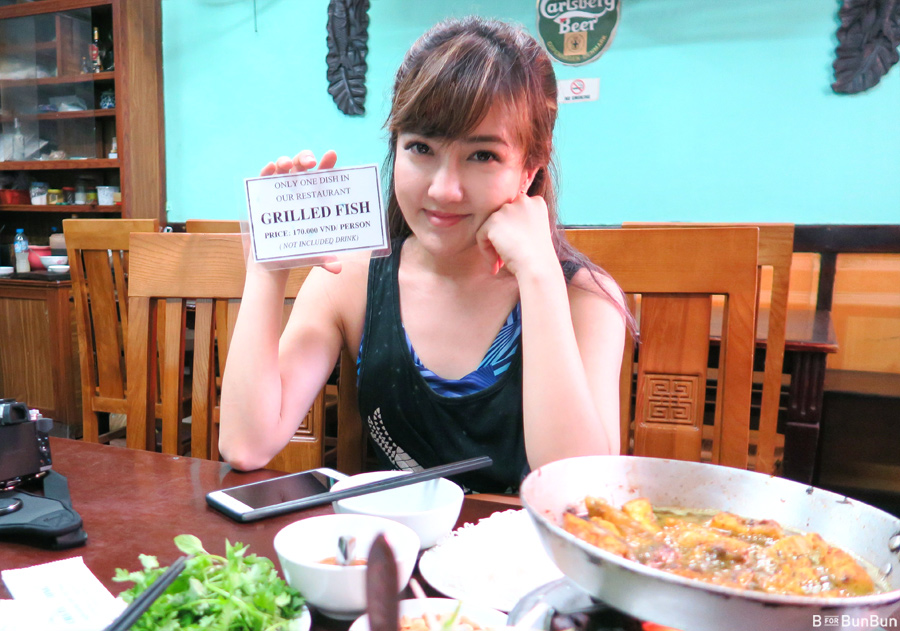 Erm, for its long history, nostalgic ambience, and placements in travel magazines, I'd really like to tell you we enjoyed the meal at Cha Ca La Vong, but....... no, we did not.

During the meal, I kept wondering, "Is this really what people have been praising?? HOW? WHY??"

We were shocked when the skillet arrived with pieces of fish swimming in hot oil. Like, A LOT OF OIL and not very fresh-looking. Let's not even discuss health issues; the taste was really off. Every mouthful was like lubricating our lips with a super greasy lip balm that never fades. We waited for the fish to cook some more, so that the oil will be absorbed by the fish, but there was simply too much oil. The rice noodles were dry and stuck together, making it difficult to pick them up with chopsticks as they break off from the weight of the clump below. We didn't finish our noodles, and I saw the staff putting our remaining noodles back to the common pile, ready for the next customer. Perhaps it's the local culture to recycle leftovers, but maybe don't do it blatantly like that for all to see?

The bite of the fish was so-so, I mean, it probably might have tasted nice if not for the oil that was enough to grease a car. I do not remember telling my mum I like the taste of the fish, all I remember was us telling one another "OILY OILY OILY". 😖 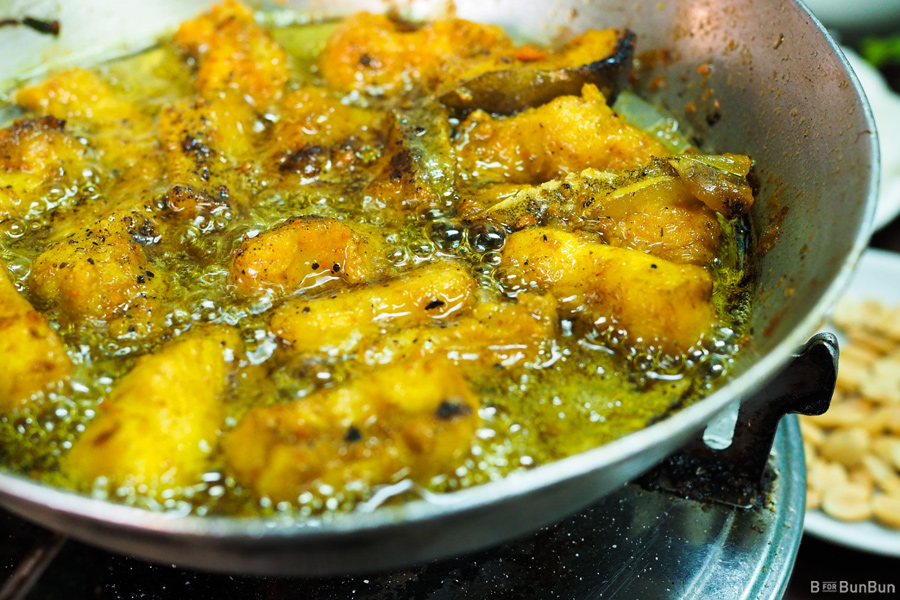 ALL. THAT. OIL. I kenot. The fish was way too salty, in my opinion. The salt overpowered any hint of turmeric, even when eaten with lumps of noodles. After the meal, we felt very oily. HAHA. There was hardly any memory of the fish, the only take-away being the feeling that we'd drunk a bottle of cooking oil each.

It may look delicious in this picture, but unfortunately it was anything but. We kinda had to coax one another to have the last piece. 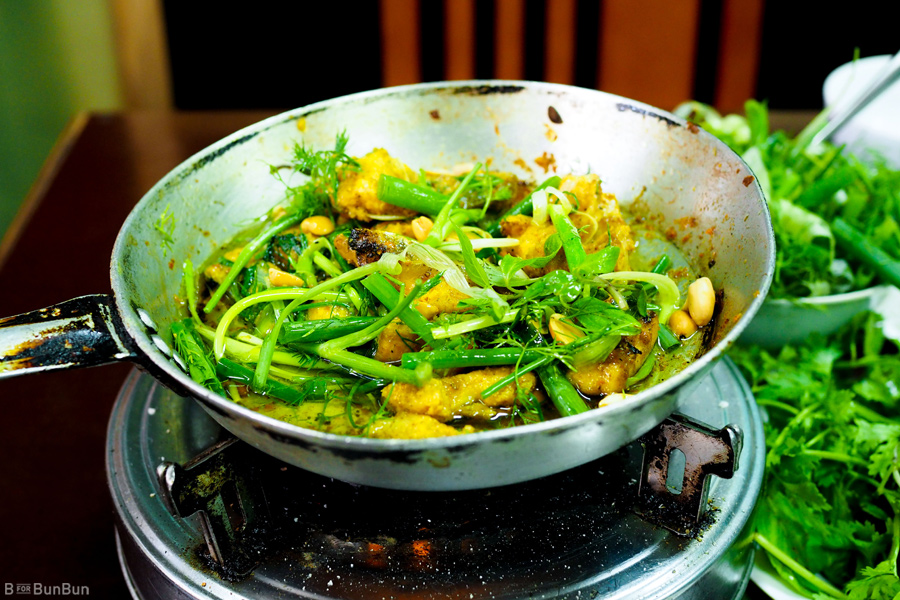 Beware of the copycat: CHA CA LA LVONG just across the street. So sneaky with an extra 'L' in front of 'Vong'. Then again, if you only had one chance to try Cha Ca, I wouldn't recommend coming to this street. 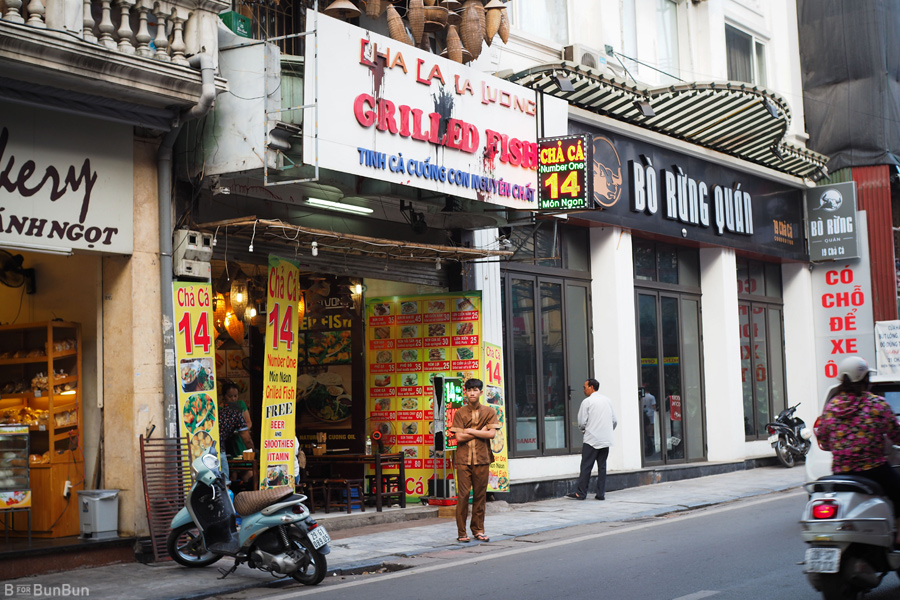 The dissatisfaction from Cha Ca La Vong left us wanting. I didn't want the only and last memory of the iconic Hanoi dish to be 'oily' and 'not worth the hype'. The day we returned from Halong Bay, we set forth for Cha Ca Thang Long.

Cha Ca Thang Long was highly recommended by our hotel receptionist and the moment we stepped into the place, we understood why she's such a big fan. Sure, it didn't have the sleepy charm of La Vong, but that was hardly missed. The interior was modern and simple, brightly-lit, and there was air-conditioning. Not that we minded not having air-conditioning, of course, but it was a nice touch. There were locals and international patrons, but mostly locals.

The Cha Ca, ohmy, it was EXCELLENT. At Cha Ca Thang Long, you can order just one dish to share, nobody's gonna give you a black face and this-or-scram attitude. So we ordered one dish for the both of us, coz our stomachs were already partially occupied by my favorite Banh Mi from Banh My P (seriously I'm not sure to spell it 'Mi' or 'My').

Here, the herbs looked fresh (so fresh and nicely plated I had to take a picture), the rice noodles didn't clump, and service was great. The staff asked if he can help us, demonstrated, and spent time explaining how to properly cook the dish. The service staff all spoke English fairly well. The instructions were essentially the same - cook the fish, add the dill, spring onion and herbs, put some rice noodles into your bowl and add chilli, peanuts and fish sauce according to your desired taste, but having someone guide you along made for a much better experience. 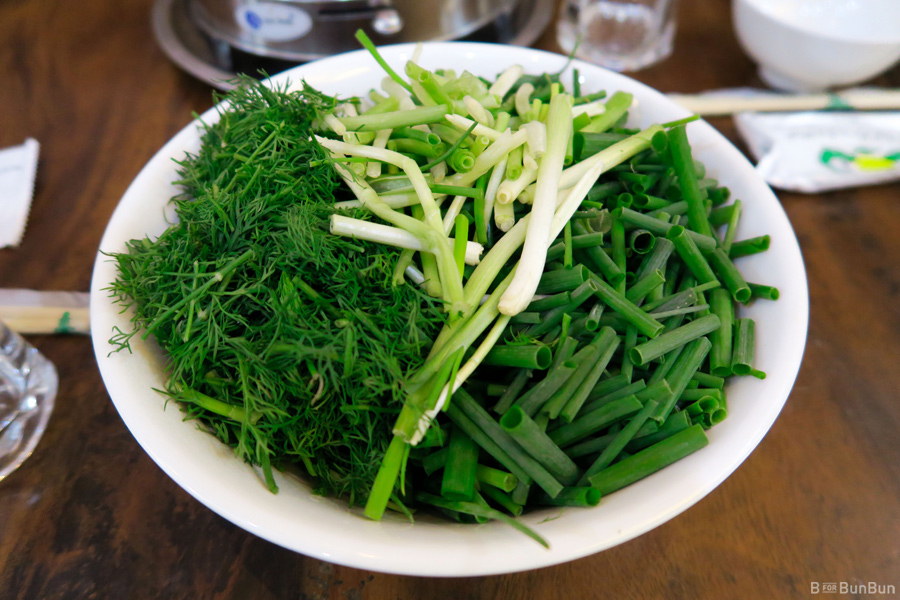 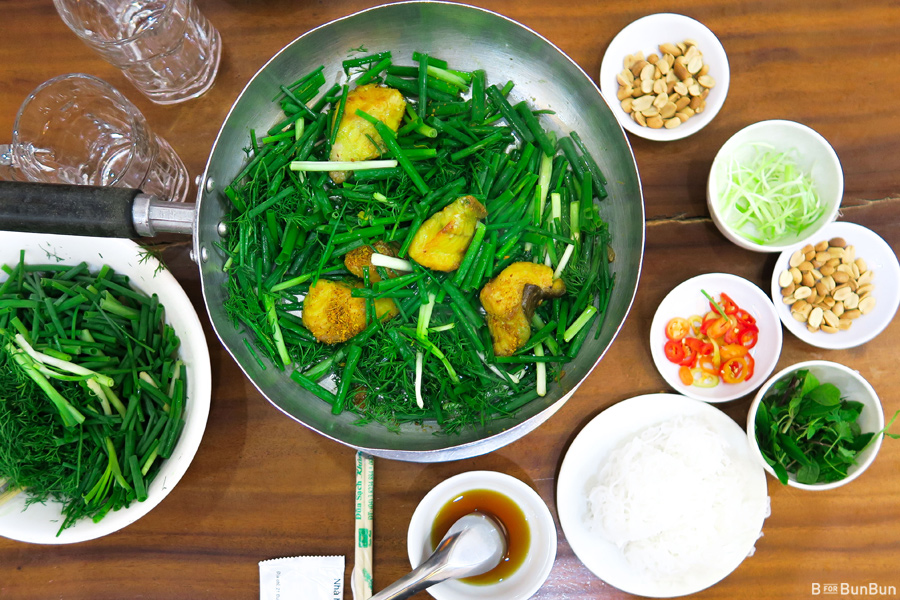 Most importantly, the oil looked clean and fresh as opposed to recycled, and just the right amount was used; the pieces of fish were chunky and juicy and optimally marinated and was enough for both of us. At the previous Cha Ca La Vong, the fresh herbs when cooked with the fish felt like an odd neighbor and we were reluctant to drown them in the pool of oil, but at Cha Ca Thang Long, the greens and fish tasted like a heaven-matched marriage. 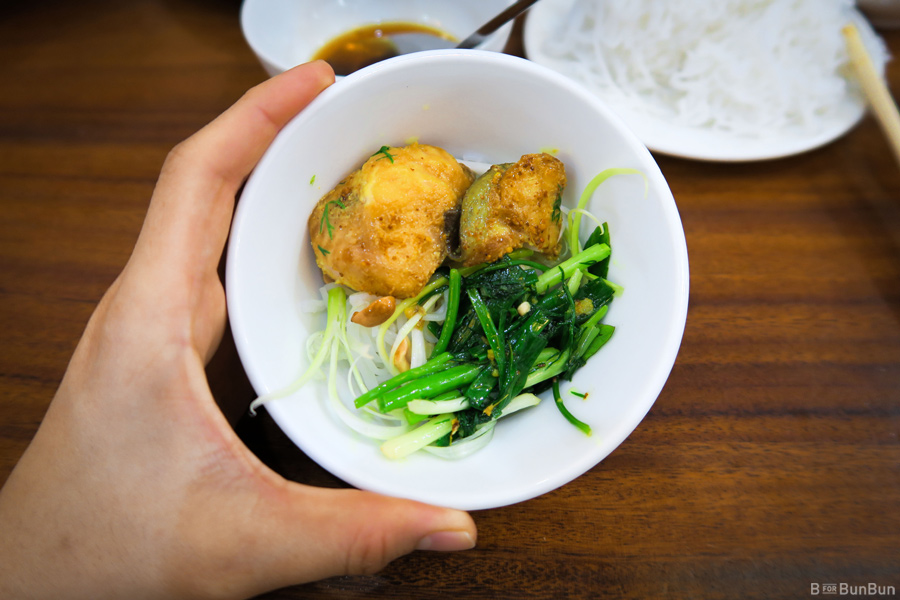 Our eyes lit up and we actually smiled at one another the moment we had our first bite of fish + rice noodles + herbs. 😁

For its clean environment, better service, great quality of food, Cha Ca Thang Long charges less than the 100 year-old veteran. At VND 160,000, you can even order to share. 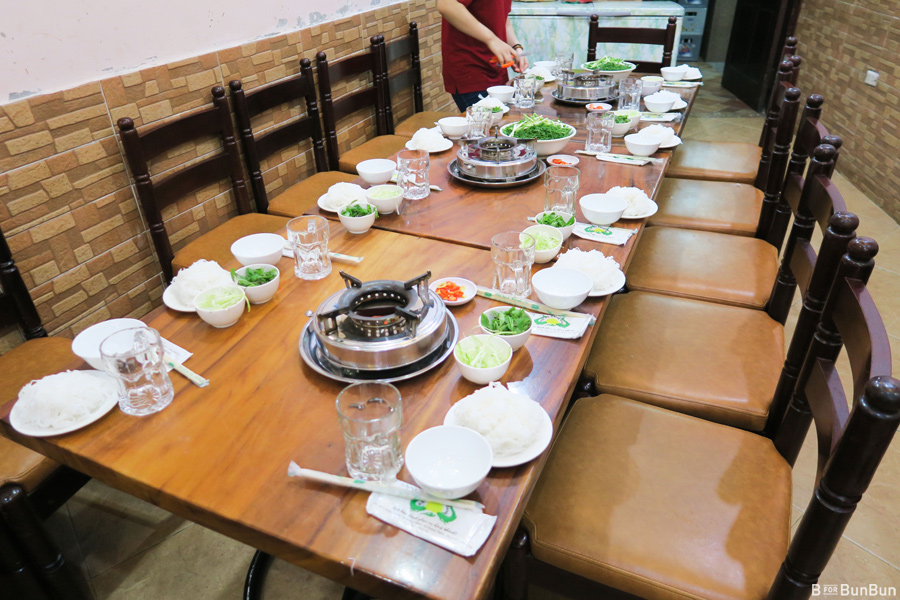 See, they even go the extra mile of cutting the rice noodles to make it easier to pick them up. 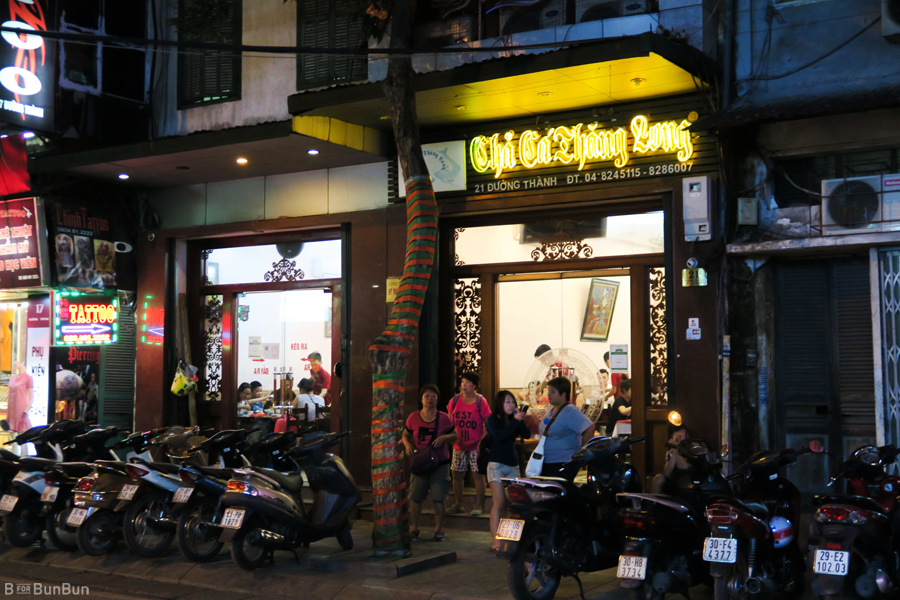 Without a doubt, Cha Ca Thang Long wins hands down, surpassing Cha Ca La Vong in terms of food quality, hygiene, ambience, service, and price. Perhaps we caught Cha Ca La Vong on a bad day, maybe their fish is better on other days, maybe oil-dripping Cha Ca is the authentic way, I'm not sure, but I love Cha Ca Thang Long's interpretation of Cha Ca and cannot recommend it enough.