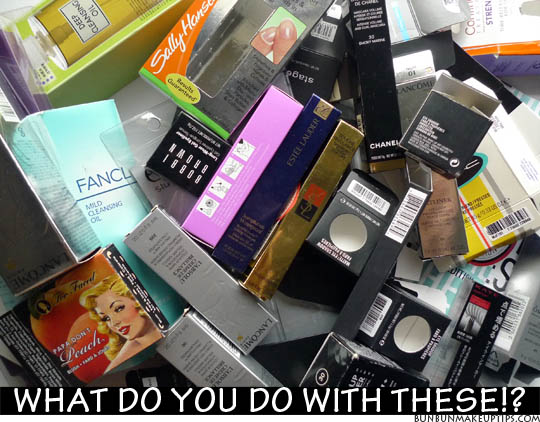 Okie, so I’ve got a problem here, a problem that many of you might share and also have no idea what to do about.

Not milk cartons, not gift boxes, nor the likes of precious and expensive ones that come with branded bags.

You know, those little boxes that you probably take 10 seconds to look at because you are more excited with what is inside the box - so that you can start admiring, swatching, playing with, and creating makeup looks with the product itself.

What then becomes of the abandoned boxes?

I used to throw them out immediately after I open the product, then I thought it was such a pity because part of the $x I paid went into the packaging.

So I extended the period of retaining those boxes, but sent them for recycling after a few weeks. Then when I got more serious into blogging, I realized I didn’t have the boxes to take pictures of.

So I stopped throwing them away and now I don’t know what to do with them. (Sometimes I still forget and get so excited I throw them into the bin right after I open the boxes.)

Oh, I only keep boxes though, not those plastic bags that come with MAC brushes.

For a while, I used them as compartments in a box I previously used to house my makeup, but that box shrunk - okie - more like the number of makeup products increased by a lot and that box just wouldn't fit anymore. I've since shifted them all into my Muji storage cabinet.

Nowadays, I just throw them in a huge Watsons plastic bag, and dig for them when I need to review something. Even when I don't eventually get any extra information from the text on the box, just knowing that I have the complete packaging makes me feel safe. Haha! 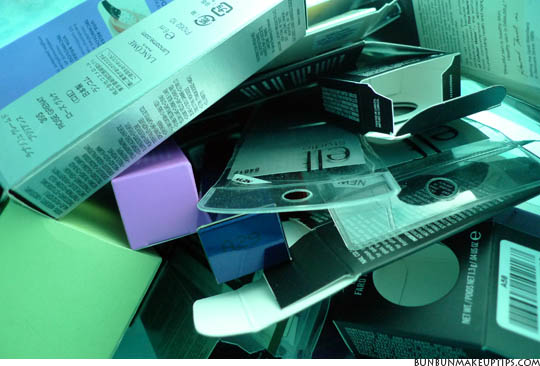 Looking into the Watsons plastic bag

There are a hundred and one ways to make use of boxes, especially for Arts and Craft. I would have been delighted to use all these cute little colorful boxes to construct my city landscape or tribal village, instead of boring tissue boxes and ugly toilet rolls back in primary school.

So how do you deal with empty cosmetics boxes?

Do you throw them out? Recycle them? Use them to make treasure chests, piggy banks, jewellery boxes? Or any other interesting ways of using them?

Previous Post: « The Estee Lauder Sumptuous Waterproof Bold Volume Lifting Mascara is Good Only if You Don’t Apply Too Many Layers
Next Post: Makeup Look Suitable for Dance Lessons or Maybe the Gym »