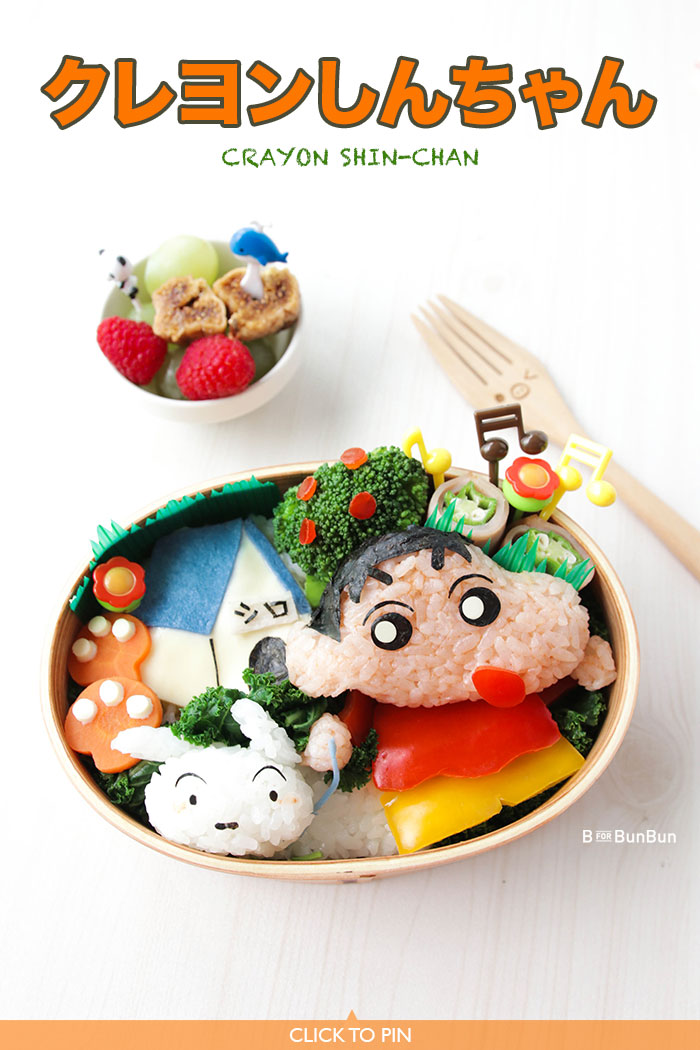 Some people follow bedtime routines such as taking a warm bath with essential oils, curling up with a good book, or having a mug of warm chocolate. Others follow the advice of putting away all electronic devices at least two hours before bedtime.

Then there's my husband who faithfully watches an episode, or five, of Crayon Shinchan (蜡笔小新) on Youtube, every single night. Without fail. It's amazing how many videos there are of this 5-year-old Japanese boy online since he has never repeated a video before. We've been watching Crayon Shinchan since our teens but he's the bigger fan.

That's why he was the first I called when I completed this bento; I needed expert advice.

Me: Coz you're the expert, I trust you

Him: So... you called me for this? I'm busy at work you know *shows his desk*

I didn't know the dog's Japanese name is Shiro (meaning white) until I was researching to put together this bento. I only know it by its Chinese name 小白. Even though I've watched countless episodes over the years I never really took notice of the Japanese name on the dog house. Shiro is white and fluffy, and sometimes seems to be the only one intelligent enough to understand the whole situation. The dog always wants to go this way and Shinchan always pulls it in the other direction with its leash. Shiro has the ability to roll up to look like a cotton candy.

The Real Story Behind Crayon Shinchan

Crayon Shinchan was inspired by a real boy - Shinnosuke Nohara - who died saving his little sister in an accident. Their mum, in shock and depression, decided to capture her children's days daily lives and how they would continue to live had they not died, in crayon. That's also the reason why this show is called 'Crayon Shinchan'.

Yoshito Usui, the original author of the series, was inspired by this story and began to create an anime by the name Crayon Shinchan.

NAHHHH. Those are just rumors. Just fanfiction created out of nothing. Come on, it's the internet, the biggest hub of lies mankind has ever seen. Lol.

The real story is that Yoshito Usui before beginning his career as a mangaka worked at a shop called Darakuya store. The founder and owner of the store was Shinnosuke Nikaidō. Usui created a manga - 'Darakuya Store Monogatari' - based on his experiences, with one of the characters named after the store owner. This manga got published in a local magazine. The then editor-in-charge proposed that Usui make that character as the protagonist of another manga.

“The character of Shinnosuke is based on the child I want to be.” — Yoshito Usui, original creator of Crayon Shinchan.

The stories resonate with audiences, especially adults because of their no-censor jokes and unorthodox portrayal of child-like innocence.

For 20 years, the late Usui dedicated himself to Crayon Shinchan. The character's brazen replies, witty retorts and besottedness with attractive older females were a reflection of the challenges, lies and opinions of society faced by a child, and were also inspired by conversations and daily life with his family, especially his daughter. This video interview tells all.

So there you have it, the real story of Crayon Shinchan. Crayon Shinchan is fiction, a truly fictional character like Doraemon with no tragic backstory or anything.

If you have young impressionable kids, maybe... don't let them watch Crayon Shinchan until much later. Haha. His bad habits, inappropriate use of language, as well as mischievous behavior might highly influence your kids! Once you go there, there's no unseeing, no turning back. 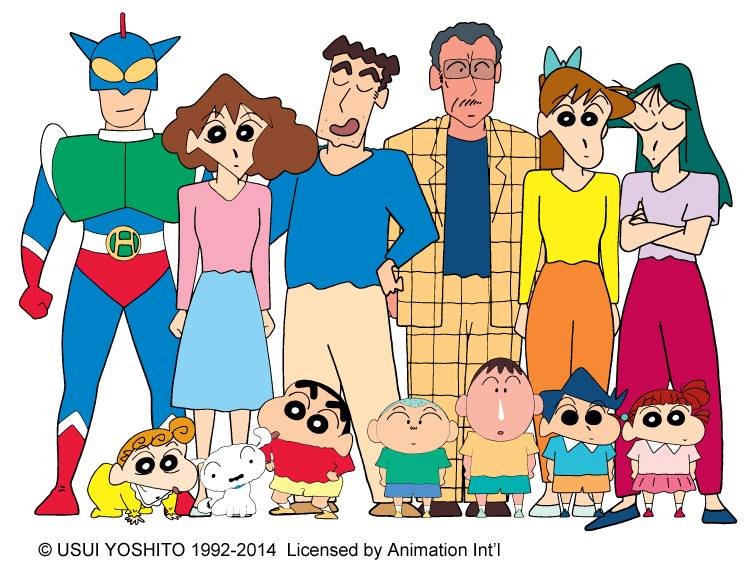 Here's the cast of Crayon Shinchan, with his favorite superhero, his family, best friends, and kindergarten principal and teachers. His grandparents and his friends' parents (whom he likes to irritate as well) are missing from this picture.

We watch the anime in Mandarin as there are few in Japanese with subtitles. Do you know who is the voiceover of Shinchan's mandarin voice? It's seriously hilarious hearing Shinchan's voice coming out of a lady! 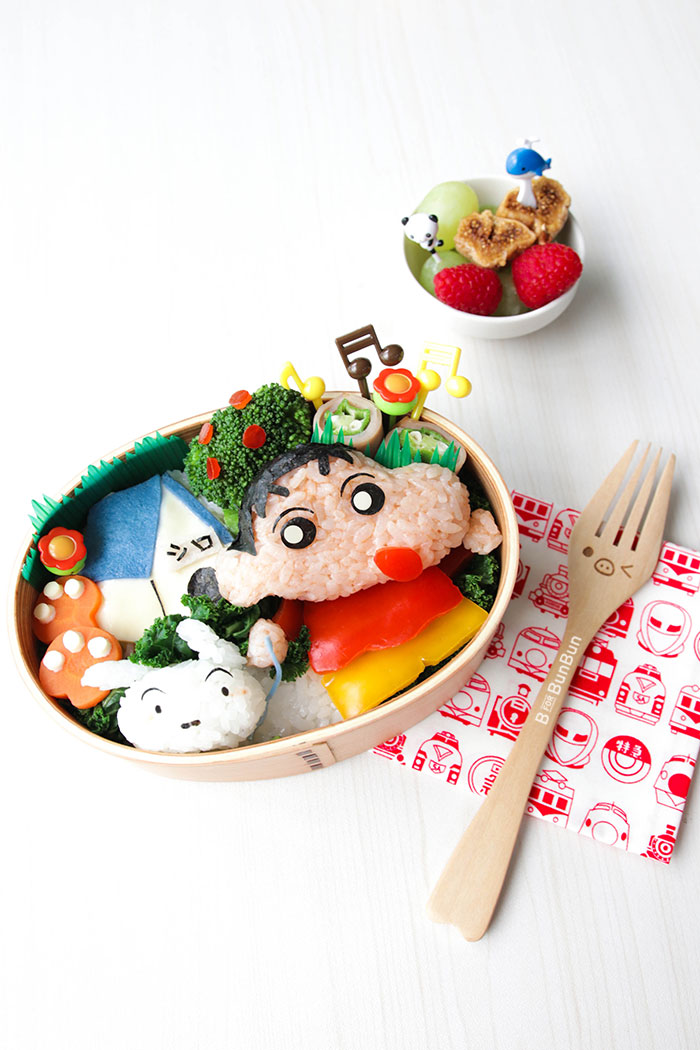 I was wondering how I could achieve the bright red and yellow of Shinchan's iconic apparel without using artificial food coloring. Sure, I'd be able to achieve those colors in an instance, and with very little of those chemically derived pigments but I wanted to go as natural as possible. Then I thought of red and yellow bell peppers. Life saviors! They're so bright and cheery, and 100% natural and healthy. You just need to slice the skin really thin to be able to hold down the pieces, otherwise they might pop up due to the curves of the peppers. 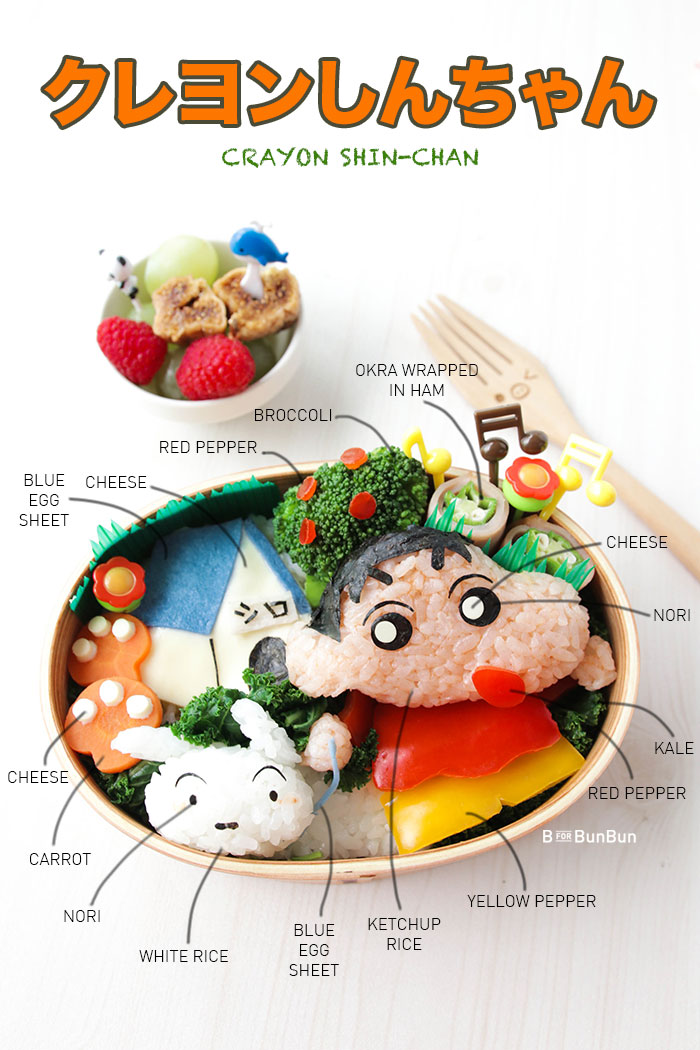