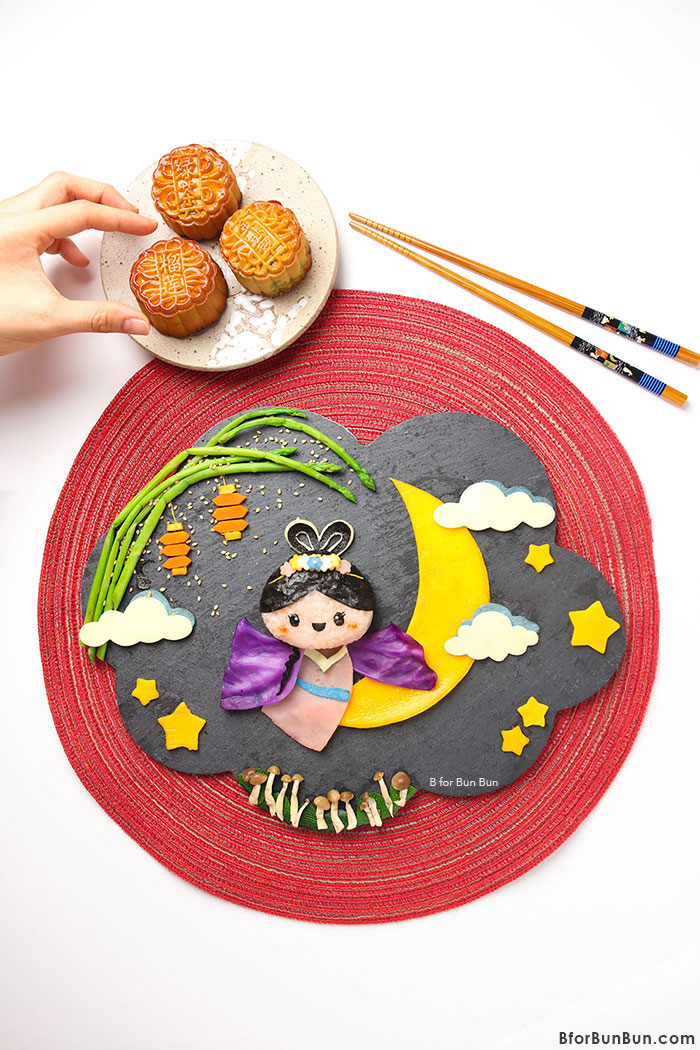 The Mid-Autumn Festival is a lunar appreciation marking the end of the autumn harvest. In Singapore, we enjoy delicious mooncakes, appreciate the beauty of soft lit lanterns adorning trees and those carried by kids and adults alike, and try to look for the shadow of Chang'e on the moon.

The Legend of Chang'e

The most famous and usually the first legend children are told about the Mid Autumn Festival is that of the moon fairy or goddess Chang'e (pronounced chang-er) ascending to the moon. We call it 嫦娥奔月。

A long, long time ago, there were ten (yes, ten!) suns in the sky. They had a competition to see who could glow the hottest. The heat from the ten suns was so intense it scorched the crops and killed people, making the lives of the living unbearable. One day a young and courageous archer, Hou Yi, vowed to take down them suns. He climbed to the peak of the highest mountain and aimed his bow and arrows at the suns and shot down nine, leaving the one we have now.

Earth was saved, and people thanked and worshipped Hou Yi for his selfless act of getting so close to the suns to annihilate them. People came from all over the land to learn archery from this hero. Hou Yi was bestowed the Elixir of Immortality by the Queen of Heaven herself for his brave act. By consuming this pill, Hou Yi could become a god and live forever.

Though tempting, Hou Yi was very much in love with his kind and beautiful wife, Chang'e, with whom he would rather spend his mortal life. Fearing the Elixir of Immortality might fall into the wrong hands, he tasked Chang'e to hide it.

Of course, one of his archery students by the name of Peng Meng saw where the elixir was kept and devised a way to rob it.

While Hou Yi was out hunting one day, Peng Meng charged into their house and demanded for the Elixir of Immortality. Knowing the extent of damage Peng Meng would bring to the world if he were to become a god, and she could not physically fend him off, she swallowed the elixir. 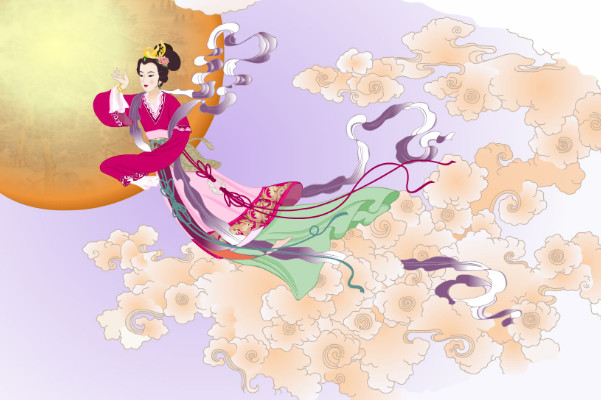 Before she knew it, she started floating towards the door, out into the yard, into the sky, and towards the moon, where she would stay forever. (Alone. Away from her beloved. Sad.)

A grief-stricken Hou Yi built an altar and filled it with food that his wife liked in memory of her and her sacrifice.

You'd see pictures of Chang'e on Mid Autumn Festival paraphernalia - mooncakes, boxes, lanterns, stage decorations, etc. It's the folklore that comes to most people's minds first when they think of Mid Autumn Festival. By the way, that's today in Singapore! 😀

I used to wonder year after year why establishments don't use melon seeds anymore. They're so good, so basic, and so CHEAP. But I know now. It's precisely why.

Only sentimentalists. I really do prefer my mooncakes made the traditional way over these modern fancy ones.

For a couple of years I tried making my own mooncakes with everything I love in them.

These are snow skin mooncakes, which are ten times easier to make than the traditional type. People rarely make their own pastes anymore since store-bought ones are easier, cheaper and more convenient, and not necessarily any more sinful than home-made. Stores now equip themselves with 'reduced sugar' versions to accommodate to the more health-conscious community.

For snow skin mooncakes, all you need to do is make the dough, let it sit in the fridge while you roll the paste into balls, adding any extra ingredients to your fancy. Once the dough has set, you'll place the balled paste into a portion of the chilled dough and roll them all together. Then flour it and press it into the mooncake mold. Theoretically it's not difficult, just extremely tedious because on top of rolling of the balls, most people (who prefer to have mooncakes look as uniform in size as possible) will weigh each ball and each portion of dough wrap.

I made these 4cm x 4cm mini mooncakes look like little jade pieces by swirling in some green food coloring. 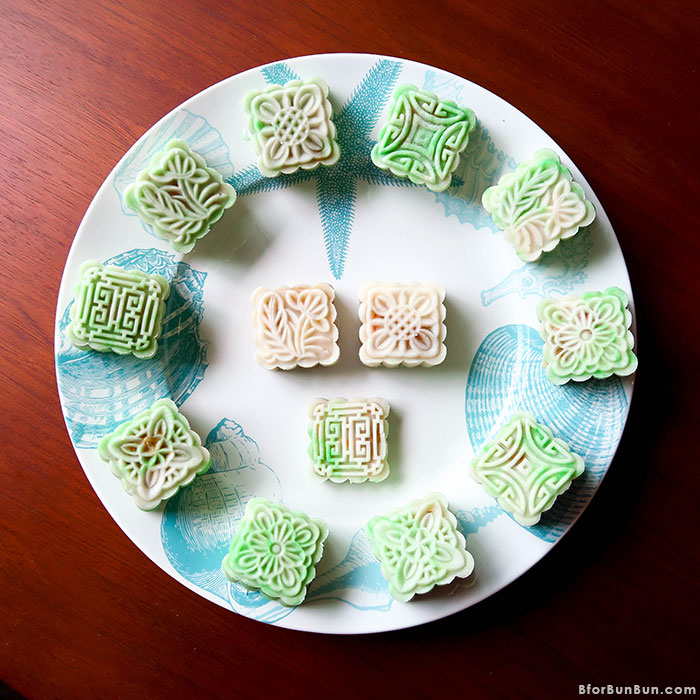 On a separate occasion I made these matcha snow skin mooncakes which were a hit! The skin contains high grade matcha powder and the matcha paste was bombed with plenty of melon seeds. Well, the best part about making my own mooncakes is being able to add any amount of ingredients I want. The amount of melon seeds I have in one mooncake should be the sum of that in probably eight commercially-sold mooncakes. HOHO.

I shan't delve into the specifics of mooncake-making as that's not the main point of today's food art/bento. Maybe next time! 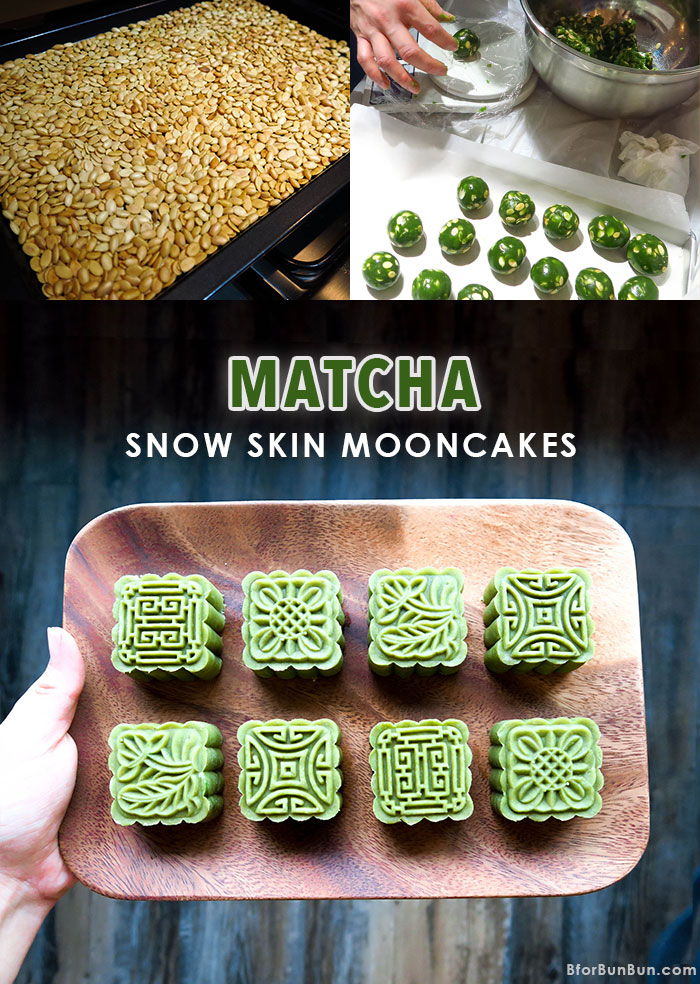 I would love to show to show you my beloved traditional mooncakes but they always turn out too ugly for the world of the internet lol.

Today's about the moon fairy and here's a tutorial on how to make her dress out of food. 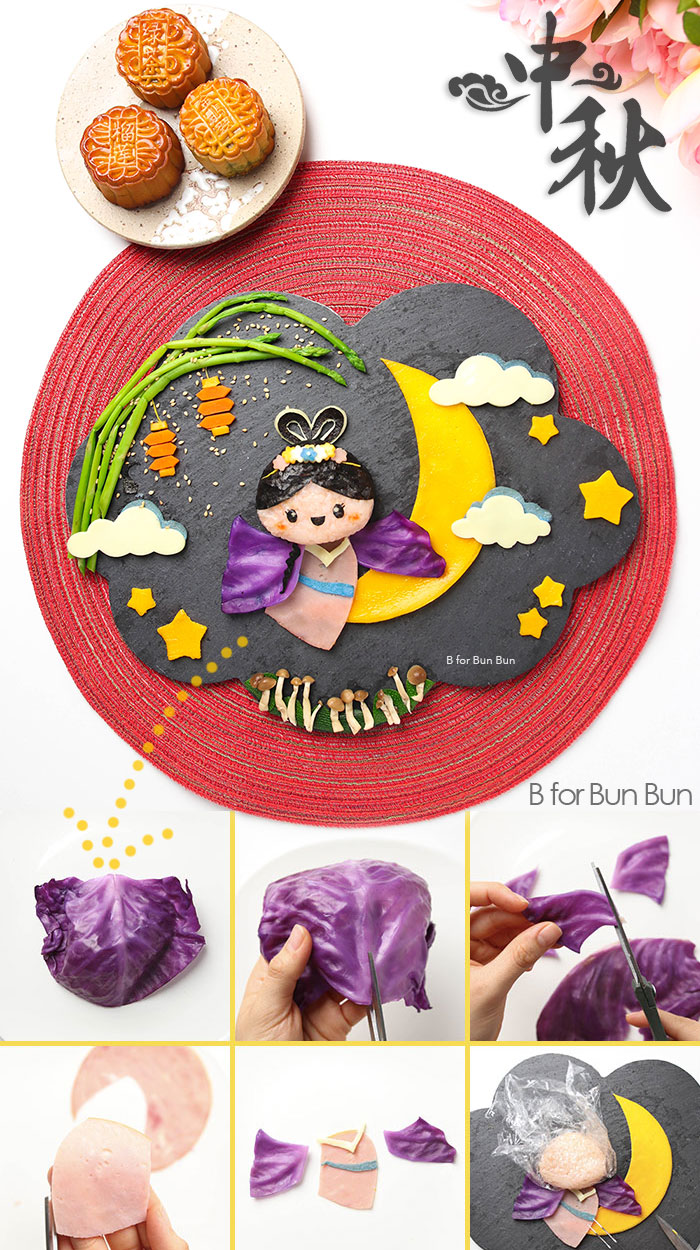 How To Make A Moon Fairy Dress 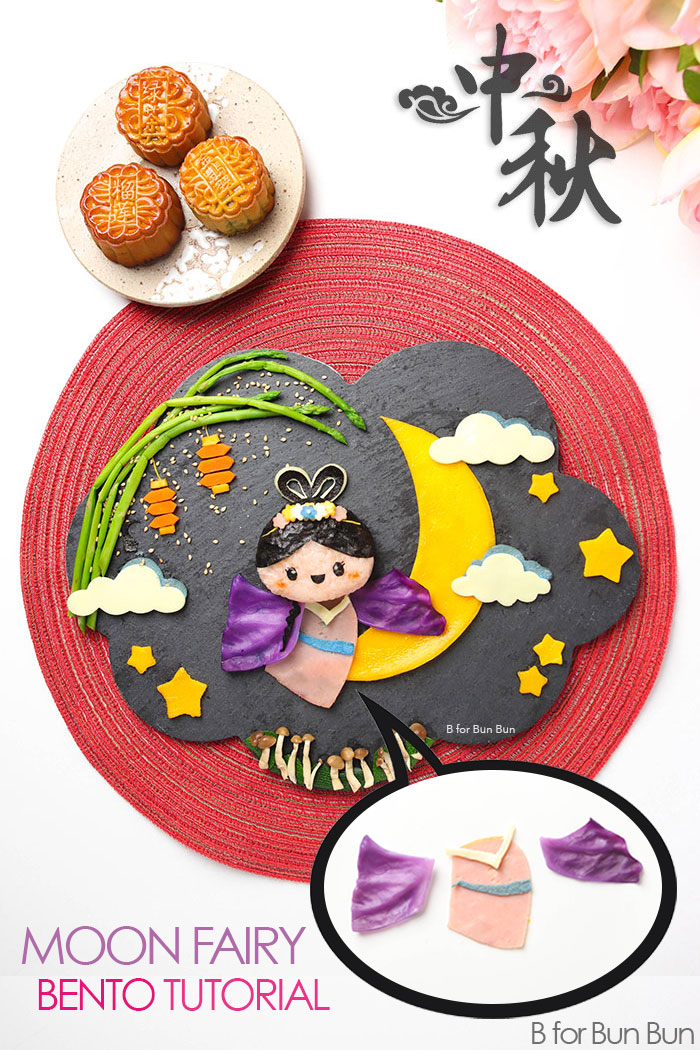 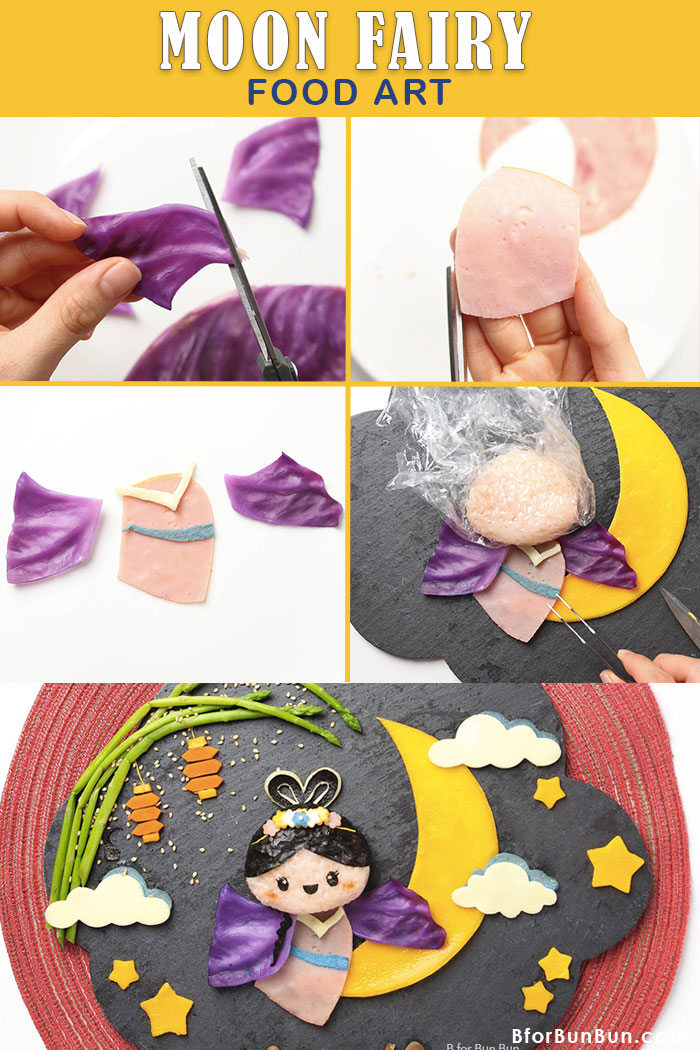 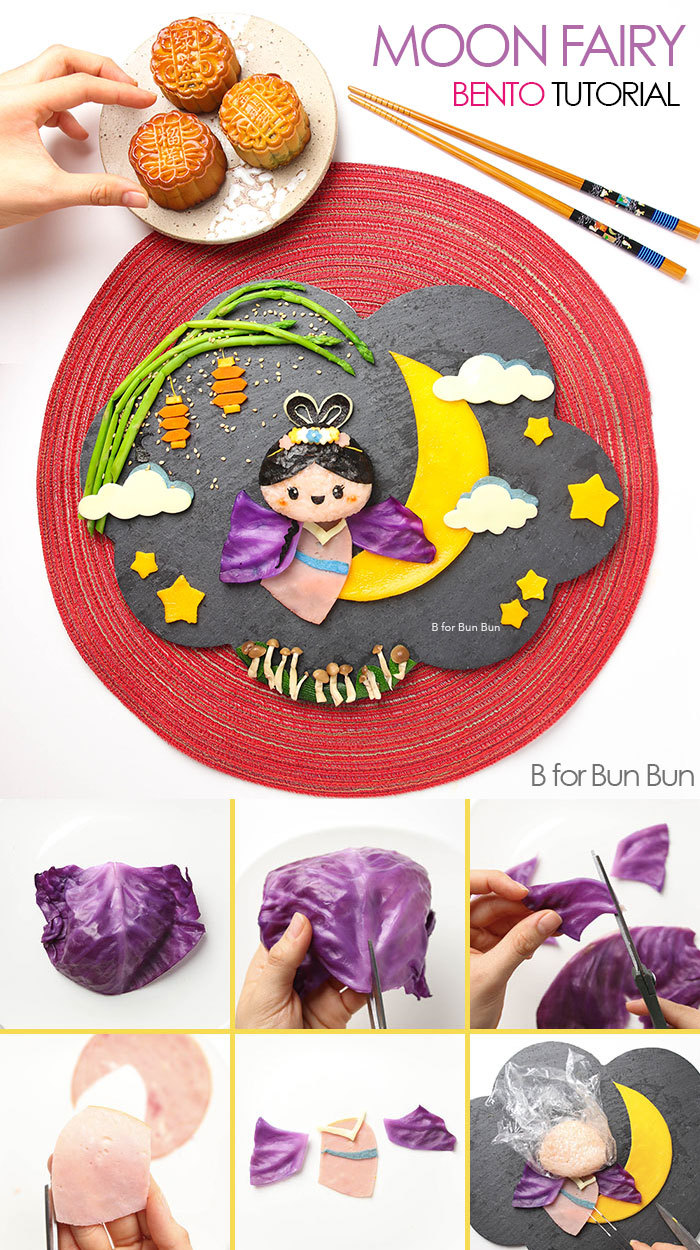