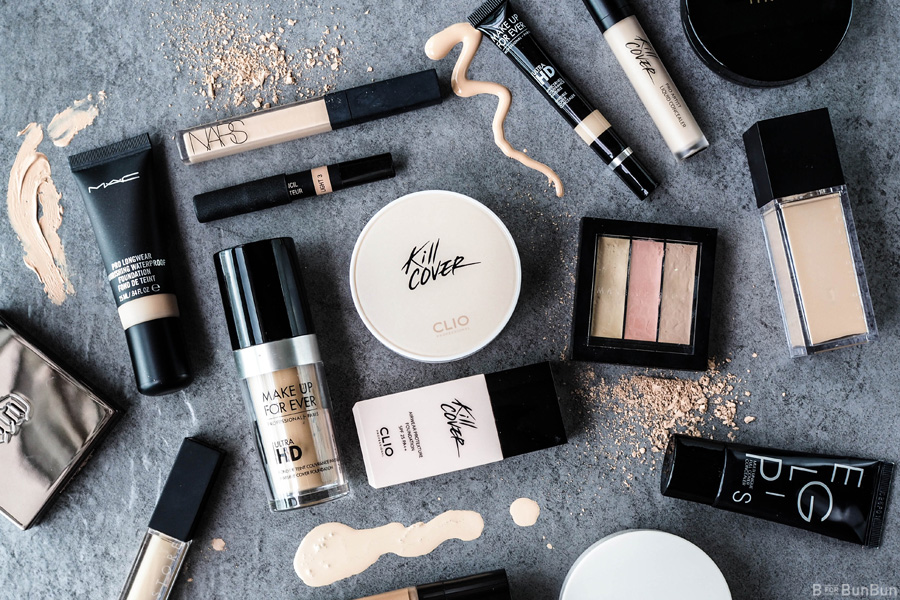 Foundations and concealers are my weak spot. Maybe because it's so difficult to find something that sits well with my oily, acne-prone, sensitive skin that I can't help searching for the next best. Meaning if I feel something isn't working, I'll give it a couple more tries before moving on but if I find something that works, I'll stick to it for a long time.

It's summer all year round in Singapore. The temperature may dip slightly towards the end of the year, but it's mostly still hot, sunny, and humid. For oily skin like mine, the 'dewy glow' look is a no-go coz the oil on my face already creates more than enough shine on its own haha.

While I've tried way more skin-enhancing, flaw-reducing products than pictured here, I'm going to share only those that worked for me in 2016. LEZZGO! 😀 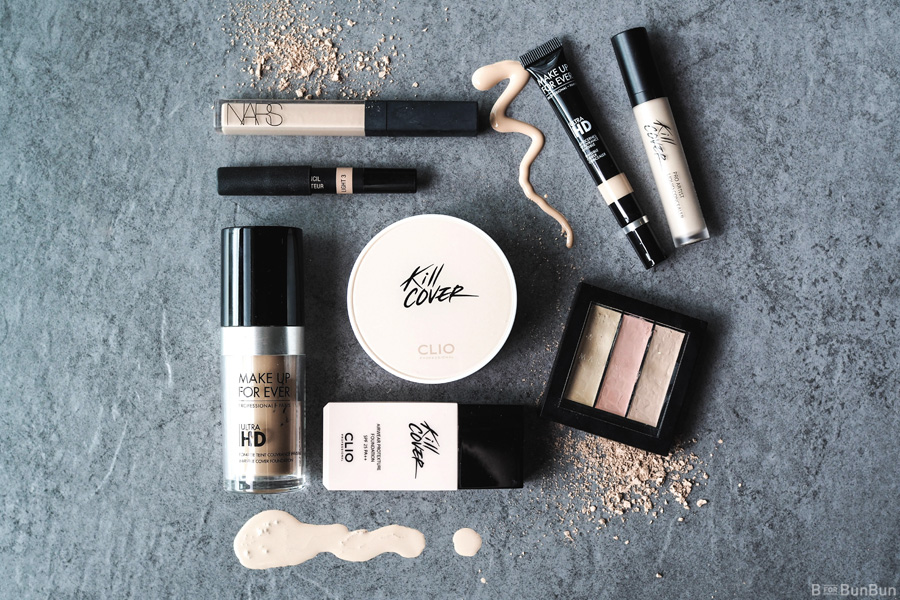 Make Up For Ever Ultra HD Foundation: I discovered this foundation when it was launched in the later part of 2015 (I think). I totally bought into the whole 'HD' marketing concept and my skin did look flawless in pictures. It has an emollient consistency and delivers full coverage, however after a few hours of wear, it would start to break down and kinda... seep into the skin and make my pores look more pronounced? Not very good at oil control either. Despite those, I repurchased it at the beginning of 2016. I love that there are soooooo many shades available to suit a wide range of skintones. My Make Up For Ever Ultra HD Foundation shade is Y245.

CLIO Kill Cover Airwear Protexture Foundation: Clio sent me this foundation in 2 shades - Linen (3) which leans slightly pink and Ginger (4) which is more neutral-warm. It's a typical liquid-poured-from-tube foundation that is rather runny and blends well with fingers or brushes. It has this air-light formula that blends flawlessly, controls shine, and minimizes the appearance of pores. Coverage is light to medium, so if you don't have much to cover, you'd love how natural this looks on skin. On days when my skin was obedient, it sat well without emphasizing pores, and had a noticeable sheen without looking oily. However during the period of wear, my skin was going through some tough times with dry, bumpy and flaky skin attributed to an overdose of Stieva-A prescribed. 🙁 So note that this foundation isn't for extremely dry skin, but good for normal-combination skin without too many blemishes.

CLIO Kill Cover Stamping Foundation: The above CLIO Airwear Protexture was my Holy Grail for many months until the CLIO Stamping Foundation arrived and OMG I cannot tell you enough how much I love this! I'm wearing it now as I type, and have been wearing it every single day for the past 6 months. I have one in use at home, one in the office, and another bought for backup - because I'm paranoid like that. Haha. You never know when brands will suddenly pull their best-sellers off the shelves! After trying a myriad of cushions with none that impressed me, I was slightly disappointed when I opened the box to see another cushion-type foundation. Upon further reading I realized it's actually a liquid-cream foundation dispensed through a mesh when you press the sponge down to lift product. Then stamp stamp stamp away on your face. It sounds very much like a typical cushion, but the consistency is nothing like it. A flat sponge is included, but I prefer using the stamp sponge (also included with purchase). Coverage is medium to full but feels lightweight. It might appear super matte for people with drier skin conditions, but the finish is just perfect on my oily skin. It doesn't clog pores nor trigger an outbreak.  I do still have to blot at mid-day, but this is one foundation where my face doesn't look like a mirror when I look into the mirror. BAHAHA. 😆

CLIO foundations work really well for me, but the downside is that Singapore only carries 3 shades. I'm a MAC NC25-30 and I have to wear the darkest shade, which is Clio Kill Cover Stamping Foundation Set 004, Bo Ginger. 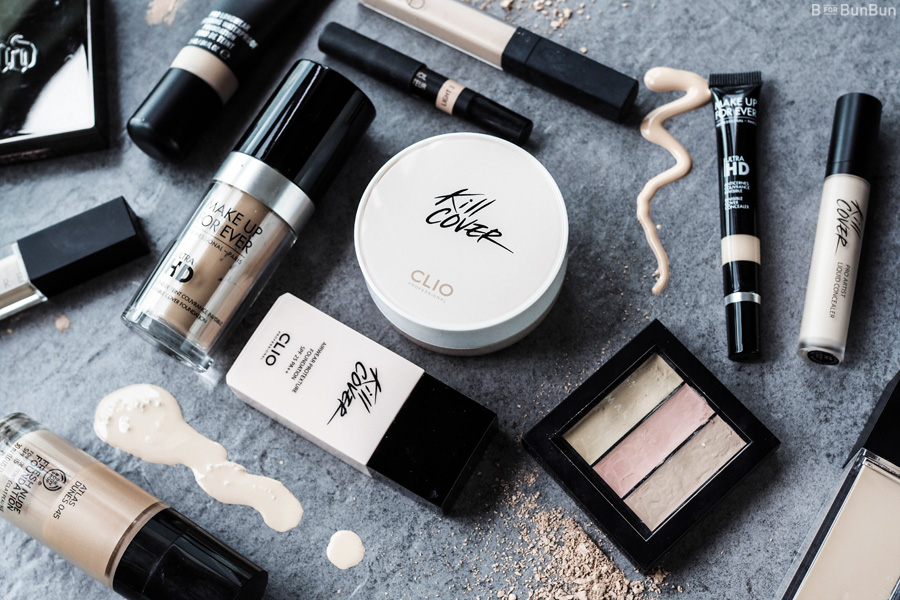 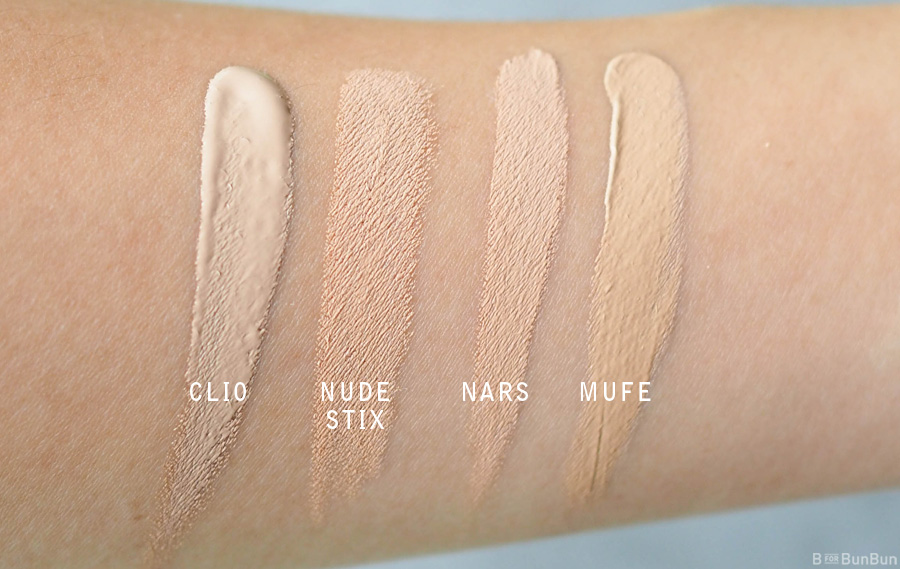 Since I have so many different types of blemishes on my face to camouflage, one of my favorite things to purchase is concealer. These are my favorite 5 concealers of 2016:

Make Up Store Cover All Mix Concealer: A highly pigmented concealer palette that contains 3 shades. Yellow (left) covers redness, salmon (middle) covers blue areas like undereye circles, beige-neutral (right) can be used for many things like highlighting or a neutral concealer shade or even mixing with foundation to tweak the shade. As a thick and dry texture packed with pigments, it is definitely not as emollient as other liquid/cream concealers, but a little goes a long way. Efficacy diminishes when it dries out. Well, don't they all.

Nudestix Concealer Pencil: A soft, matte pencil concealer that goes on creamier than it looks capable of. It is better at covering general blemishes than dark circles. As it is of a drier texture, applying it around the eye area will accentuate fine lines. I do adore the Nudestix Magnetic Eye Colors though! I reviewed them in 16 Favorite Beauty Products Of 2016.

Clio Kill Cover Pro Artist Liquid Concealer: Last but not least, CLIO - again. Haha. I swear I am not paid to brag about them, I just love their products a lot! From eyes, to brows, to face, to lips - I'm such a fan of their stuff I've repurchased more than I've been sent. As evident from the swatches, the Clio concealer is much lighter. I intentionally bought a just-nice shade* coz I reckoned that while I do have dark undereye circles, the more prominent issues I have with skin is pigmentation and scars. Can't do much about bumpy skin, but at least try and cover what I can. I wish to not have to use 3 different concealers (unless they come in the same packaging as the Make Up Store one) just to cover up and the Clio one so far has been amazing in terms of blendability, coverage, and wear.

*just-nice shade = A shade chosen without considering the 'rules of thumb' hahaha. Like, we're told to get a shade or two lighter for this purpose, or a shade darker for that purpose. I experimented with tubes and tubs of concealers for many years and realized that as long as the concealer manages to cover what you want and you look natural, get it. I've seen people go by the 'one two shades lighter' rule and end up looking like the reverse of a raccoon. Just sayin'.

In 2017, I want to experiment with more. Technological advancement in the beauty industry is so exciting! 😀 One foundation on my checklist is Giorgio Armani Luminous Silk Foundation. Not a new thing, but I've heard good stuff about it. Care to share your favorite foundation/concealer? ^_^ 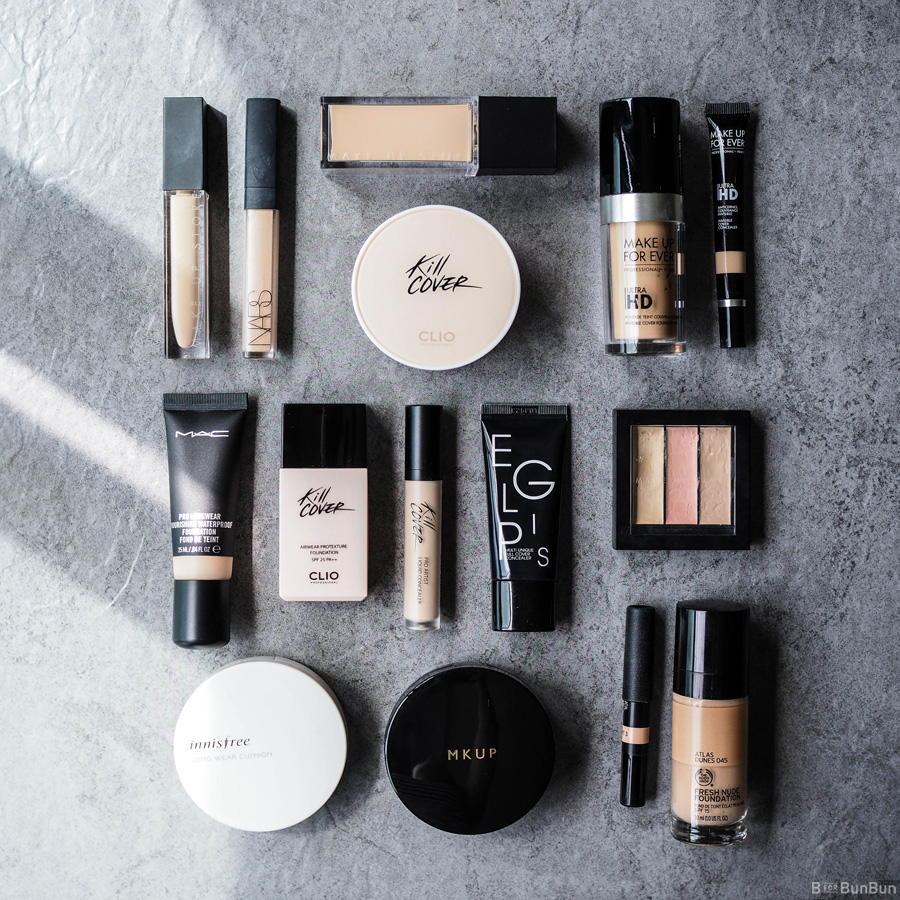 Previous Post: « This Is How Fighting Aging In Your 30s Is Like - Olay
Next Post: Taste The Good Life In Style - 3M Hot, Cold, Room Temperature Filtered Water Dispenser »