The Urban Decay Primer Potion is more than a crush to me. You know, we’re kinda married. Having extremely oily lids and living in a country that is hot and humid all year round, the UDPP has been my savior.

It keeps my eye makeup crease-free, brings out true vibrancy in eyeshadows, and best of all, makes the colors stay on from morning to night.

It is indeed, the best eyeshadow primer and therefore a cult-favorite. Find out how to make the magic last and get more bang for your buck! 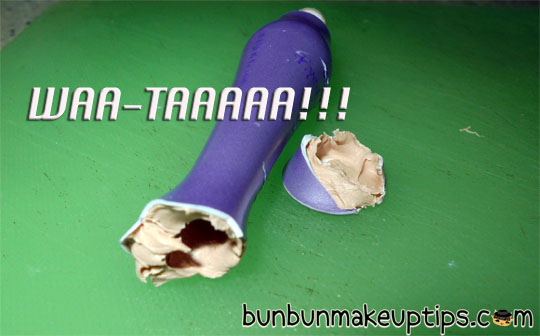 The previous Urban Decay Primer Potion (which is famously referred to as UDPP) wand was originally straight and the shape of the tube made it impossible to get all of the product out. That’s why when people depotted it, a lot of product was left inside.

When I bought my UDPP in Nude (dries transparent) in 2009 it already came with the revamped wand, the one with a kink. 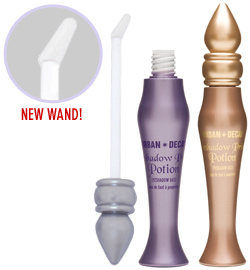 My UDPP lasted about a year and even though I thought a year was a pretty long period for something to last, I decided to depot it anyways, just to understand what went through the minds of the people who depotted it.

So now allow me to be the ten billionth person to do a tutorial on how to depot the Urban Decay Primer Potion. My unique value proposition is that I will show you how to do everything in less than 5 minutes.

-       Rubbing alcohol or Isopropyl Alcohol. Anything above 70% is fine

Make sure to wash your hands as the primer may get onto your fingers and you don’t want to accidentally contaminate it. Then, clean all instruments with rubbing alcohol, especially the empty jar. Just a spritz of alcohol over them will suffice.

Place UDPP on the chopping board and hold it firmly at the fattest area, which is just above the brand and wordings. Then using the meat cleaver, in one swift motion, HACK at the area that is the slimmest. Due to a small surface area, it is the weakest point of the structure and therefore the most vulnerable to stress.

I was so shocked to see that I had cracked open the UDPP so easily that I just stood there motionless for 10 seconds. LOL.

Many videos and blogs suggest that you saw through the hard plastic tube with a serrated knife, bread knife, paring knife, jig-saw (!!!). But the idea of sawing a plastic tube just didn’t sit very well with me. Besides, I’ve read complaints about people suffering from eye infection due to tiny plastic shavings that got mixed into the product from all that sawing. You don't want shavings in your makeup products!!!

See the little cuts? Those were from my abandoned attempts to saw through the plastic. 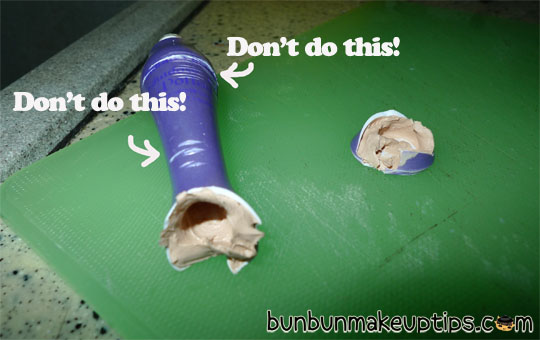 I’m glad that I kept my empty sample-sized Clinique All About Eyes eye cream jars. They have come in really handy in containing depotted products and as the mixing jar for fixing broken eyeshadows.

I was certain I’d managed to get most of the eye primer out at the top half due to the new bent wand but I didn’t expect to find so much left at the bottom! I can imagine the faces of the people who depotted from first generation UDPP! 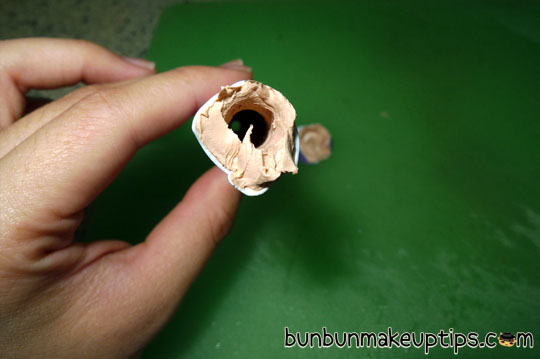 Transfer the eye primer into the empty jar with the UDPP wand. I followed what some blogs recommended, to use a toothpick or spatula to get the product out, and it was such a waste of time. Just use the application wand! 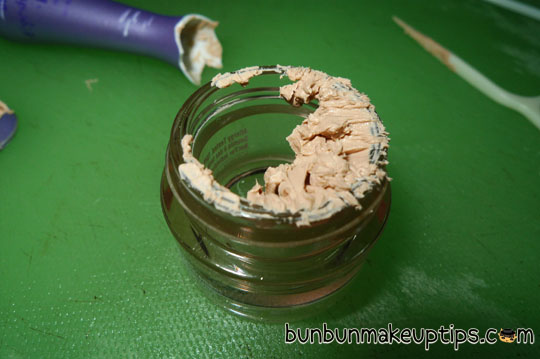 And DONE! Enough Urban Decay Primer Potion magic to last me for a few more months!

Urban Decay knows how much its Primer Lotion is loved so they came up with a new version in the form of a squeeze tube! YAYS! "The squeeze tube version of this product is exclusive to Sephora for a limited time", as stated on its website. Gotta go grab one soon! 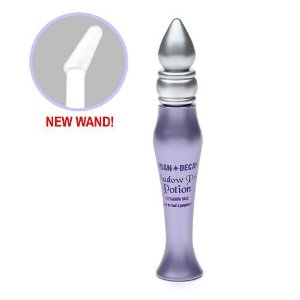 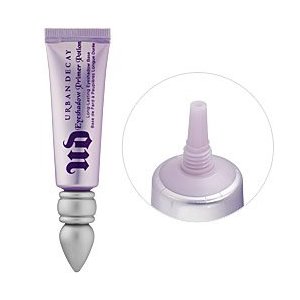 Have you tried depotting the Urban Decay Eyeshadow Primer Potion?