Do you take drugs? Or know anyone who does?

GAH. What a negative way to start a blog post.

So I mentioned in my Going Backstage - NDP Preview 2012 post and my Turning 28 post about a flashmob I took part in. It is, for me, one of the highlights of 2012, the year that would supposedly have witnessed total annihilation of the human race.

Our flashmob committee, in view of the recent slew of drug-related deaths, especially highlighted by celebrities like Michael Jackson, Amy Winehouse and Whitney Houston, decided to adopt a flashmob with a message – an anti-drug campaign.

We made a promotional video to invite people to join us! All the steps were learnt like, 5 minutes before the camera started rolling. LOL.

I appear in the final scene (*hint* I star as a possessive and OTT girlfriend. hoho), but you’ve gotta watch from the start to understand the build-up. It’s a very well-filmed video! 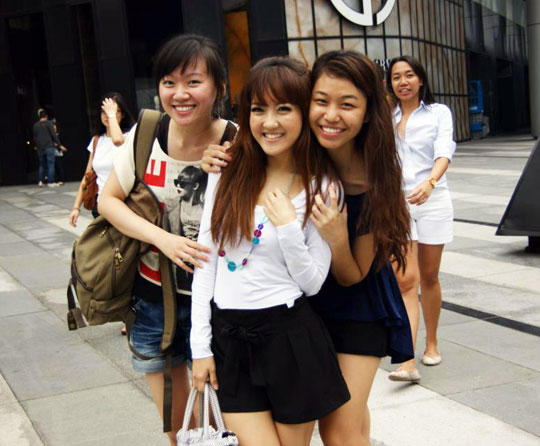 I’m sure you know how flashmobs are like. Suddenly music plays and people start dancing and everything ends as quickly as it started. Too fast for anyone to call the cops, too unnecessary to do so as well. I guess in a way flashmobs can be considered illegal as they can be viewed as holding a rally without a permit or infringing copyright.

Coincedentally, while writing this post, Yahoo! Singapore featured an article of a restaurant being under police investigation after staging a flashmob in celebration for the opening of their restaurant. I hope it’s really just simple questioning, it would be a real shame if they got prosecuted. Seriously, S$10,000?! @[email protected]

Anyway, for a flashmob with a purpose and message, our comm wanted to do it the ‘legal’ way, which means going through a lot of discussion and dingdongbackandforth with license approval and stuff. I don’t even wanna mention how much stress the comm was under due to the sheer amount of admin work involved. But thank goodness all went well in the end.

It’s pretty impressive how just 4 people (of which 3 were already my very good friends) were able to plan and execute everything from start to finish. Of course, we had another set of friends who choreographed and put together the entire dance that was made up of Latin Rumba, Hip Hop, Latin Cha Cha, and a mass dance.

Did I mention this flashmob was also the FIRST EVER flashmob that incorporated Latin dances? WOOTZZ!!

I always thought people would make fewer friends as they grow older, but now I think it’s really up to the individual to actively expand his or her own social circle if he or she so desires to have more friends. It’s really not hard to make friends. Join activities. Be more pro-active. A smile is all it takes. Maybe throw in a hello too. =)

Rumba and Cha Cha weren’t too difficult for most of us as we have attended basic courses. It was Hip Hop that was the greatest challenge. Everyone, except for the Hip Hop choreographer, had little or no background. I’ve gone for a couple of Hip Hop classes, you know, those advertised on Groupon kind. Lol. But that’s about all.

I really wanted to give up but upon seeing the perseverance and determination of my friends - new and current - I couldn’t help but feel lifted just in their presence. So in the end I danced all dances – from Rumba, to Hip Hop, to Cha Cha, to mass dance!

And so came the day! 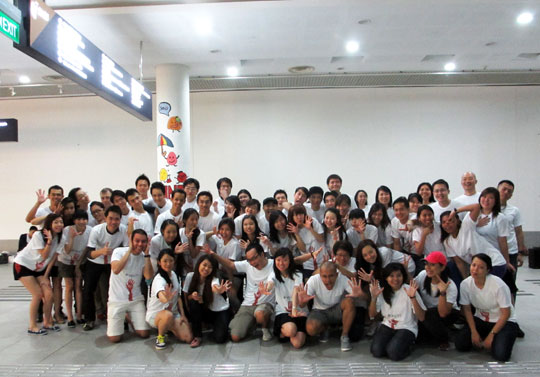 Our very last rehearsal before breaking for lunch and meeting at Orchard. Guess where this is! It shouldn't be too hard if you're a Singaporean.

Everyone had lunch in their own cliques, rested for a bit and got ready for the show. No close-up shot of me coz I only did my makeup after lunch. Hoho!

I didn't feel, or rather, think of feeling nervous at all, until Huimin suddenly exclaimed during lunch "SO NERVOUS!!!". And then I became nervous too. OMG I'm so easily influenced. @[email protected] 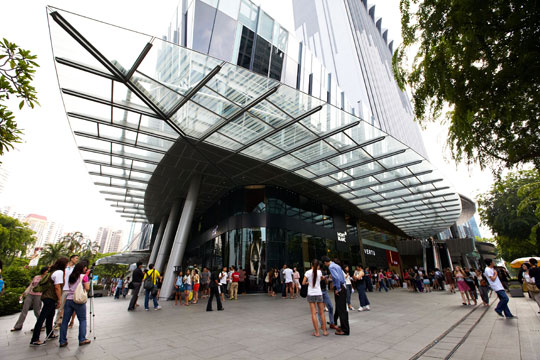 An illustration of the location done by Kat . So cute right? 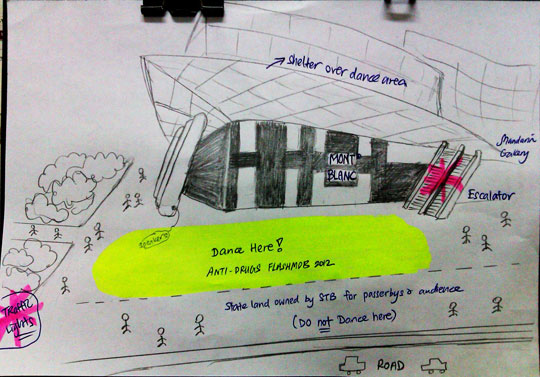 This is Rumba. I really didn't like dancing rumba with a cardigan coz it hides all the movements. But you'll see in a while why I HAD TO. And while taking it off, I forgot to shake my ass properly. -.-" 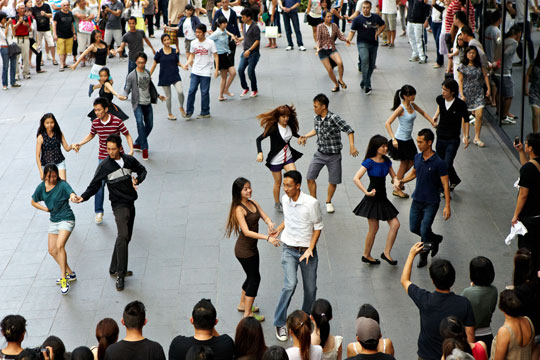 And then we went on to Hip Hop! The dance that I almost gave up. 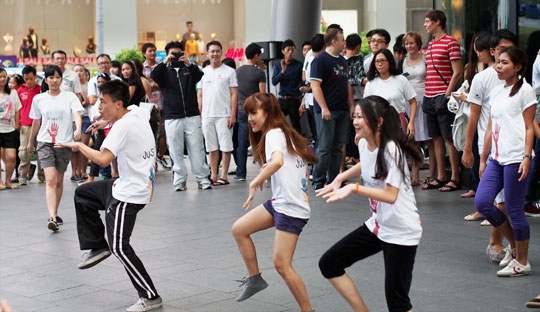 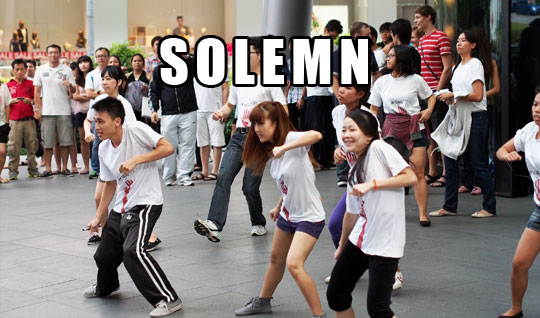 LOL! Look at my stressed up face. Couldn't help it. Was executing some step that required a lot of coordination in order not to look awkward. 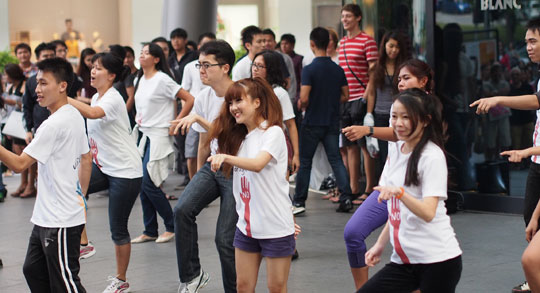 Just so because this was the only picture of me smiling so radiantly, here's a zoomed in version: 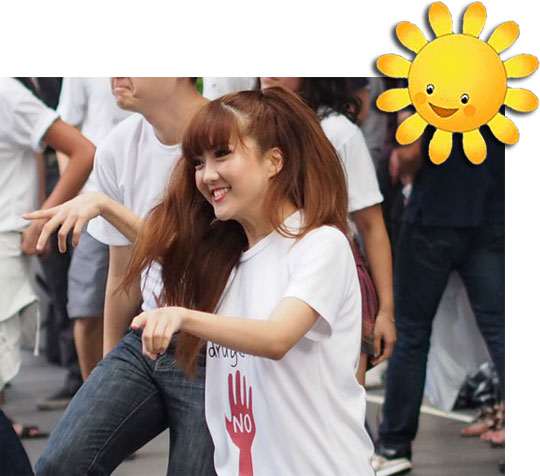 If you haven't noticed by now, my hair's quite the star on its own. 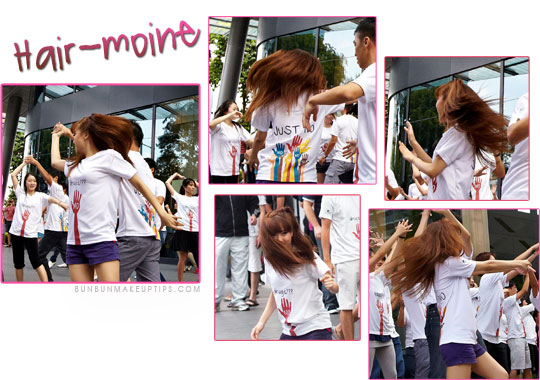 And I realize I'm a really bad performer. Bad not in terms of dance technique, but stage presence, interaction with audience and videocams. A good performer knows when and how to smile at the audience to set their hearts ablaze, which direction to look to have their best profiles taken, when the video camera is in their face and look into it.

Judging from the Hair-moine collage above, BIG TIME FAIL. LOL.

I was actually shy to look into the camera. I don't know why! (Actually I do, CLICK HERE for elaboration) I'd unintentionally look away from the camera when I saw someone filming or taking a picture of me. TSK.

Alright, given that this was my very first performance, I should cut myself some slack.

Imagine so many people looking at you move! This was only one side; there were more people on the escalator side (refer to illustration) and the crowd grew as the song progressed. 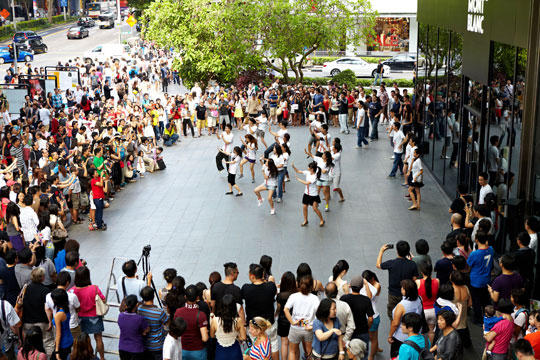 I was no longer nervous the moment I started dancing, no fear even with so many eyes on us, I just... didn't have stage presence. Haha.

And you would have met Min. She was my model for Eye Makeup Tutorial for Asian Hooded Lids, and my very good friend who came AFTER the flashmob ended. LOL. Love you all the same la! I love how brown my freshly dyed hair looks in comparison to Min's black.

(This flashmob happened on 29 July. If you follow me on Instagram @bunbunmakeuptips, I've gone ombre - light brown to red.) 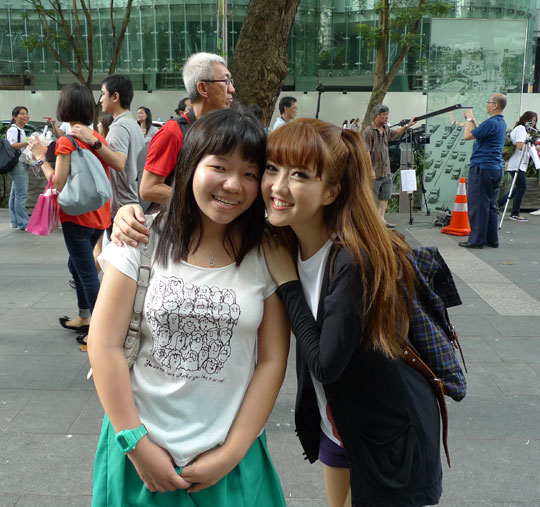 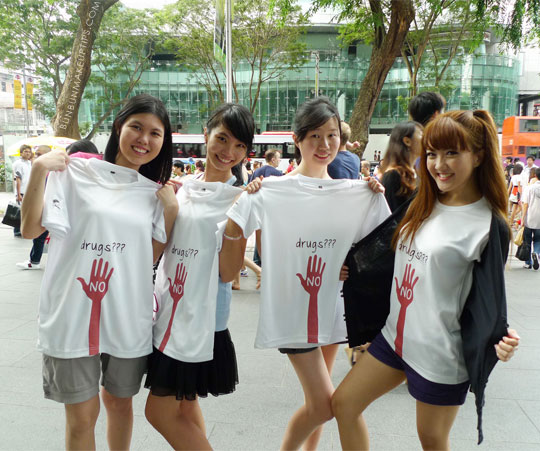 Nothing like loitering in Orchard, having dinner together, and KTV-ing the night away to milk the high spirits as much as possible. 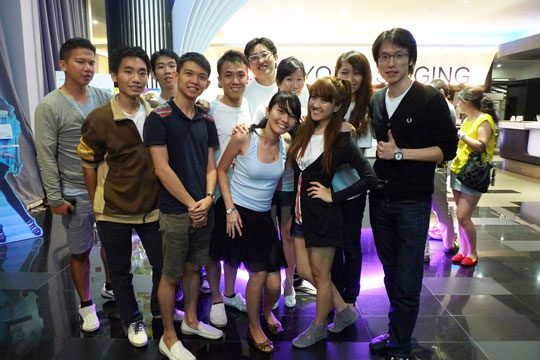 It's awesome to be at my height. Seldom have to compromise. Huimin, the girl beside me (the one who exclaimed "SO NERVOUS!!!"), is actually very tall but had to half-squat so as not to block the rest. Oh, and I never have to bend my head at low-hanging tents at night markets.

Rawks to be me. 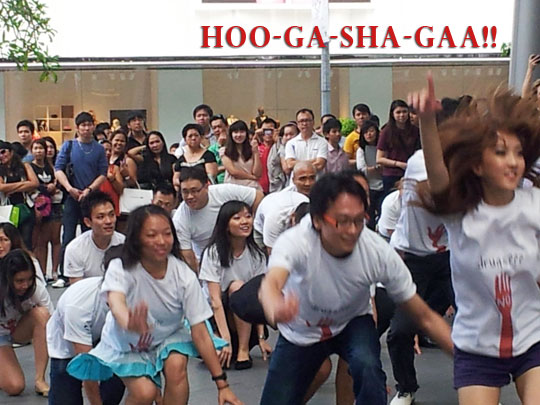 And now, the video of our flashmob. Waiting for it, weren't you?

Due to copyright issues for the songs, the authorities forbade the upload of the video on public YouTube. So you'll need to key in a password to watch it.

Because you can laugh at my noobly first public performance (not much of a pull factor lol) and the entire awesome flashmob dance! And check out some of my funny moments:

Or go to this link if you're on mobile: http://www.youtube.com/watch?v=wMC56gy8CCc&feature=youtu.be

And because it's Children's Day in Singapore, I made this. 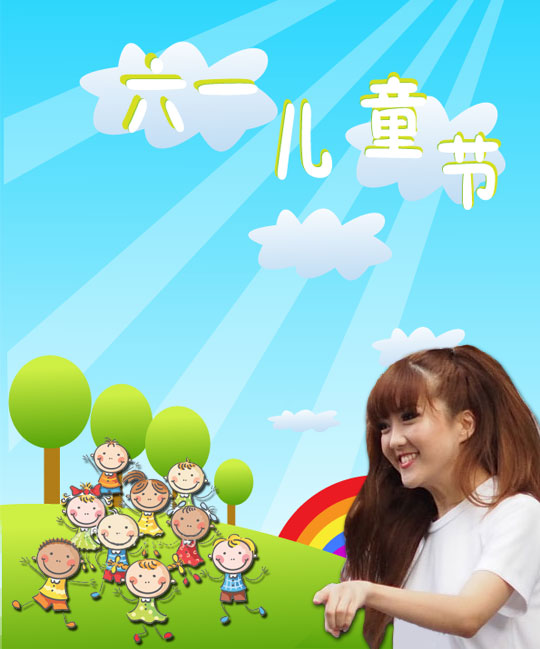 Hahaha this reminds me of a typical Chinese textbook cover with a teacher and students who look so happy and carefree, complete with rainbow and eternal sunshine.

Let me hear you sing!!

Have you witnessed a flashmob before? Have you participated in one? Would you be interested in joining one? (You should! It could be a once-in-YOUR-lifetime experience!) 😀

What do you think of my dancing? HAHAHA