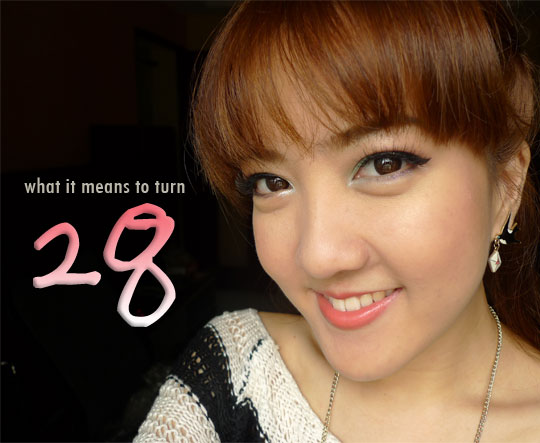 (May I add that my skin looks kinda fabulous in the photo? Thanks, Sun!)

Come July every year, every day of the month is a special one, intentional or not. It just happens that fabulous things always happen in the month of July.

It was a little unnerving when I typed the title. What!? I’m TWENTY EIGHT!? The ‘old’ word put beside my name didn’t help one bit. ‘Old Juli’. LOL.

I left it till the last day of July 2012 to write this post, just in case something bombastically fantastic happens haha. Well, nothing out of this world is happening to me right now as I type this sentence, I'm just smiling in knowing that I’ve lived a great life so far. Be contented and grateful for what you have, and you’ll always be happy! =D

If I’d known blogging would be this fun and fantastic, I’d have started years ago!

But then I always believe that everything happens for a reason, at the time it’s supposed to happen.

Years ago I’d never thought I could blog for such an international audience, never even thought anyone other than myself and some close friends who read my personal blog would want to read what I have to say.

Years ago I never thought I would have the courage to put my face out there and share with people my love for makeup and experience with products. I also never thought I could actually teach people how to apply makeup! It’s extremely gratifying when readers tell me how much they have learnt from my tutorials and it makes me want to continue making even more fabulous makeup tutorials.

You know, at the beginning, I even thought of making Bun Bun Makeup Tips a ‘faceless’ blog, meaning I’ll never show my face. I was so afraid of incurring negative comments I see bloggers receive (eg. ‘you are so ugly’, ‘you should never show your face’, ‘I hate you’) I thought I could never have the courage to stomach it.

I decided to show my face after all, and as I got more comfortable showing my face, I learnt which are my best angles, best lighting to photograph in, best way to show a product or make a tutorial.

Naturally, when people see that you’re doing well, they just wanna put you down. I’ve had my fair share of those, not too many fortunately, but enough to share my experience and help those who might be thinking how to deal with negative reader comments.

I feel incredibly blessed and thankful to all my readers who have made my blogging journey one that is filled with so much love and bonding.

I believe it is my passion in what I do and commitment to putting quality content on my blog that caught Nuffnang’s attention and then made me one of their Talent Bloggers.

One of the greatest things that happened to me after being with Nuffnang was the opportunity to be one of the 10 bloggers chosen to participate in National Day Parade 2012. The NDP team sought to involve social media participation on a higher scale this year and it’s a great honor to be part of it!

July 2012 = My First Involvement In A Flashmob

Everybody knows what’s a flashmob right? It is, simply, a group of people (who act like passersby initially) suddenly breaking out in dance on the street (usually a very busy one), usually for a cause.

The cause could be anything, ranging from light-hearted ones like ‘just wanna bring some stress relief to you stressed up professionals’ to very meaningful ones, like ours that carried an Anti-Drug Abuse message.

Everything was executed in 2 months – from idea generation, to planning, to getting choreographers, to spreading the message, to generating publicity, to arranging for rehearsals, to learning and practising the stepsf until they’re muscle memory, to last rehearsal, to the actual day.

I still feel SO EXCITED coz the event happened just last Sunday, 3 days ago! It's Singapore's first ever flashmob with Latin, Hip Hop and mass dance elements. UNPRECEDENTED! Woohoo! We had a really large crowd! SO HAPPY!!! 😀 😀 😀

If you happened to be at Mandarin Gallery, in front of Mont Blanc, on 29 July 2012 at about 4pm, you would have see this big mob of people dancing to ‘I Will Always Love You’ and ‘I Wanna Dance With Somebody’, both by Whitney Houston who died from… yes, drug abuse.

Please send me photos or videos if you took any! I'll put them up in a separate post!

This flashmob was definitely one of the highlights of the year and that it happened in July makes it even more memorable for me! Told ya July is a special month! ^_^*

Rememebr I told you I was going to set up an online store selling Asian and Western makeup products?

I’ve been working really hard on it. It’s not easy, not easy at all. There’re so many things to do, so many new things to understand and learn. I’m glad I have a wonderful team who put 100% into playing their respective roles.

So I’ve been juggling the blog, the flashmob rehearsals, and the business. It’s a lot on my plate, but I’m really enjoying every moment of every bit.

We’ve had a soft launch of the site, so we can see how it looks like and make improvements. I’m excited to share it with you guys soon! This is probably the biggest present I have ever given myself. Support support okie! =D

I used to think it quite funny when magazines or other sources say that when a woman is over 25, we age doubly fast. The skin doesn’t defy gravity as much anymore, the glow on the face starts to diminish, the figure starts to go wonky, you go to sleep at and wake up with about 5 more lines on the face…

Not that I look a day over 25 though, people say. Depending on how I dress, sometimes I am even asked for identification for M18 movies. Make me happy only! HAHA! People usually take about 3-5 years off my actual age.

I’ve never looked my age. When I was 14 and had a part-time waitressing job at a hotel, one super huge Caucasian guy asked me my age. When I said 14, he was highly amused and told all his colleagues I look like 10. I was equally amused he looked like Santa Claus.

Sometimes it can get rather ridiculous, just last year I was asked for proof of identity for an NC16 show. -.- You can check out how I looked at 16 years of age with the picture I published on the Singapore NDP activities post.

I like it when people say I look younger than my age but there are, of course, drawbacks.

Just the other day I went to meet a potential supplier and he looked at me and asked ‘So are you doing this as a part time thing? When are you graduating?’. Aiyo!!

I do think I carry myself well though. I may look young(er), but I come across as professional and eloquent, when I want to.

My younger-than-my-real-age looks work well for me on the most part though. Annoying insurance and property agents don’t pester me, coz I look like a broke student (I really am broke coz I invested everything into the business haha), especially when I’m in t-shirt and shorts with no makeup.

So at 28, I still don't look too old. The good thing is that I have become more womanly, you know, have nv(3) ren(2) wei(4). It’s that essence of being a woman that only emerges when you reach a certain age...

Xiao S, very popular Taiwan host, said in an interview that the real essence of a woman is revealed when she is in her 30s. Before that, you’re just a girl. Okie, two more years to go.

And just because July is such a special month, it deserves a longer-than-usual Life of a Bun! Just some pictures taken in July in celebration of the birth of the author of Bun Bun Makeup Tips. HAHAHA so many 'of-s'!

What special events happened in July 2012 for you? Share the love! *muack!