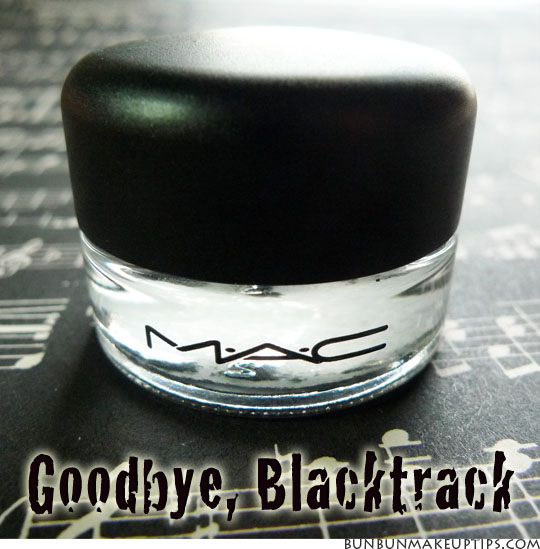 HAHA. I don’t know why said that. I’m glad my braces days are over though.

Let’s go back a little in time, to when my MAC Fluidline in Blacktrack was fresh, creamy, soft and nothing less than awesome.

Due to my extremely oily skin and eyelids, I’ve always had trouble getting liquid and pencil eyeliners stay on my lashline. The closest bet I had to a non-smudge eyeliner was the Revlon Colorstay Liquid Eyeliner. It stayed on my lids no doubt, but it also transferred onto the skin above the fold. Throughout the day I had to check if there was any transfer and remove it. Urban Decay 24/7 Glide-On Eye Pencil in Zero works for many people, but it smudges like mad on me. It works like a charm for tightlining though! (What is tightlining?)

To me, an eyeliner’s ability to stay on, and on, and on, and on…… ranks pretty high on my priority requirements. Given my disappointing experiences with liquid and pencil eyeliners, the MAC Fluidline in Blacktrack was a burst of fresh air with its remarkable long-lasting and smudge-resistant results.

I’ve cried and perspired (went to the gym right after work without removing makeup) with the MAC Fluidline in Blacktrack on and it barely smudged.

It matters just a little with and without primer. I use the Urban Decay Primer Potion (which I depotted in 5 minutes) underneath eye makeup and Blacktrack stays longer than if the eye area wasn’t primed.

Seriously, the total number of times when I don’t prime my lids can’t be more than the fingers on my hands.

The color of MAC Fluidline Blacktrack is a no-nonsense matte jet black that enables me to create the blackest and most intense eyeline. One swipe produces enough pigment on the lids, so you don't have to go over it many times, but I like mine to be black – harsh black. Some people go over the line with a black eyeshadow color or use a smudge brush to soften the line, but I like my lines harsh with very defined edges.

A light dip of my Sonia Kasuk Bent Eyeliner Brush into Blacktrack punctuated its smooth surface, leaving it with an unsightly dent the first time I tried. It felt like semi-melted butter or ice-cream was taken out of the freezer for 3 minutes.

Its buttery texture is of optimal consistency – not too gooey, not too heavy. It glides on effortless on the lids with the help of the Sonia Kasuk brush so you can imagine no tugging, no lifting of the eyelid or skin around the eye is needed.

Although the MAC Fluidline Blacktrack (U$15.00) is slightly cheaper than its famous rival –Bobbi Brown Long-Wear Gel Eyeliner in Black Ink (U$21.00), it is still perceived as pricey. I also think it is expensive, but if you think about it, for all its merits – smudgeproof, easy to apply, matte jet black, it is a small price to pay for having racoon-free eyes all day long!

Does not run, yet easy to remove

Blacktrack doesn’t run under water nor sweat, which makes it rather difficult to remove if you use only water or a very mild makeup remover. I have no problems removing any kind of eye makeup with my favorite (and best!) Biore Eye and Lip Makeup Remover. I'm on to my 4th bottle already.

That was about 6 months from 12 September, 2010 when I first bought it. Yes, I keep a record of when I buy my cosmetics products so that I know when to throw them out when they expire.

The once glorious MAC Fluidline Blacktrack is now a lump of black rock-hard substance. It is no longer creamy, no longer soft and no longer easy to apply. It still works, but I’ve to dip the brush into the pot more often to get product out since it is so dry now. 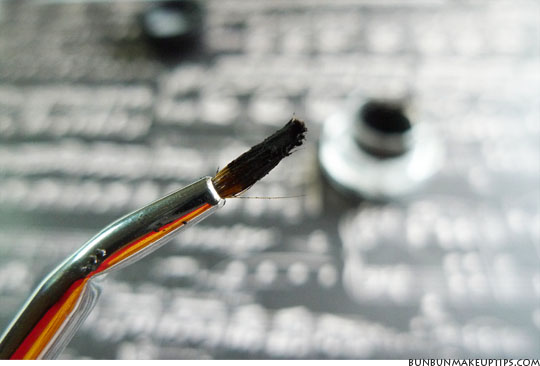 Flicking out to get a precise winged-out cat-eye effect gets harder each day. The worst thing is how badly it flakes when I layer it on. 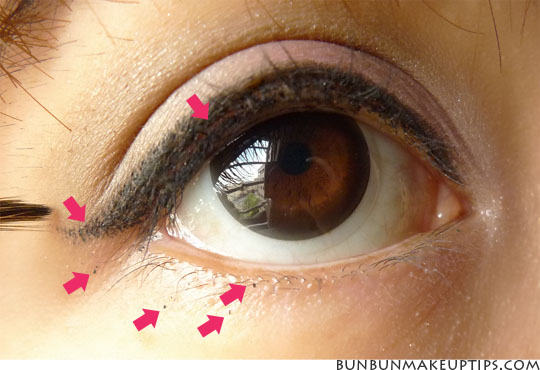 A few weeks ago I did my friend’s makeup for a dance competition. I wanted an intense eyeliner look but the MAC Fluidline Blacktrack totally failed on me. The more layers I put on, the more black specks fell on her face. Embarassing – MAX!

Some people in forums suggested using a few drops of saline and mix it into Blacktrack, some others suggested scraping off the top to reveal the possible underlying less dry layer. I did that, it worked for a couple of weeks, but now it’s dry again. 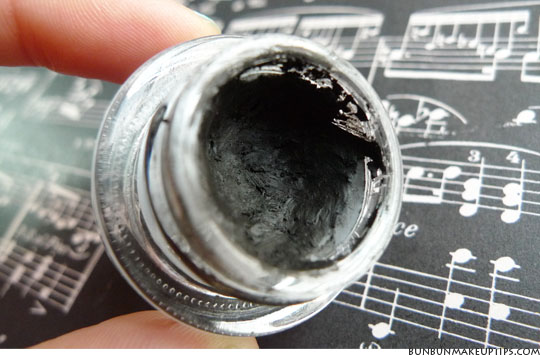 What to do to prevent MAC Fluidline Blacktrack from drying out

It is probably too late for me to do anything now, but it has been recommended that if you leave the pot upside down it dries out slower. Remember to keep the lid tightly closed too!

Seeing it drying out and dying such a terrible death makes me reconsider buying the other colors like Waveline and Macroviolet. Thank you Blacktrack, you were good while it lasted. I will continue using you until my order for the Bobbi Brown Black Ink arrives. (Update: Bobbi Brown Long Wear Gel Liner in Black Ink review)

Despite it drying out like that, 6 months is a pretty long time for a gel eyeliner to stay functional, and I still think Blacktrack is really in a class of its own among all gel eyeliners in the market. 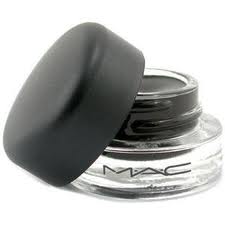 What do you think of the MAC Fluidline Blacktrack?

Have you experienced any gel eyeliner that dried out?