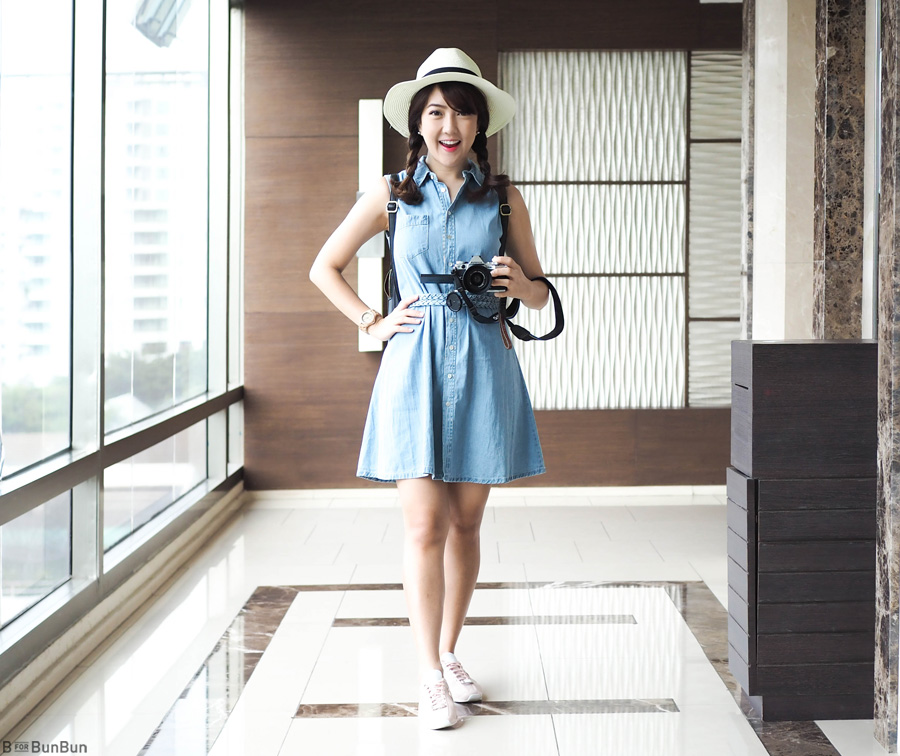 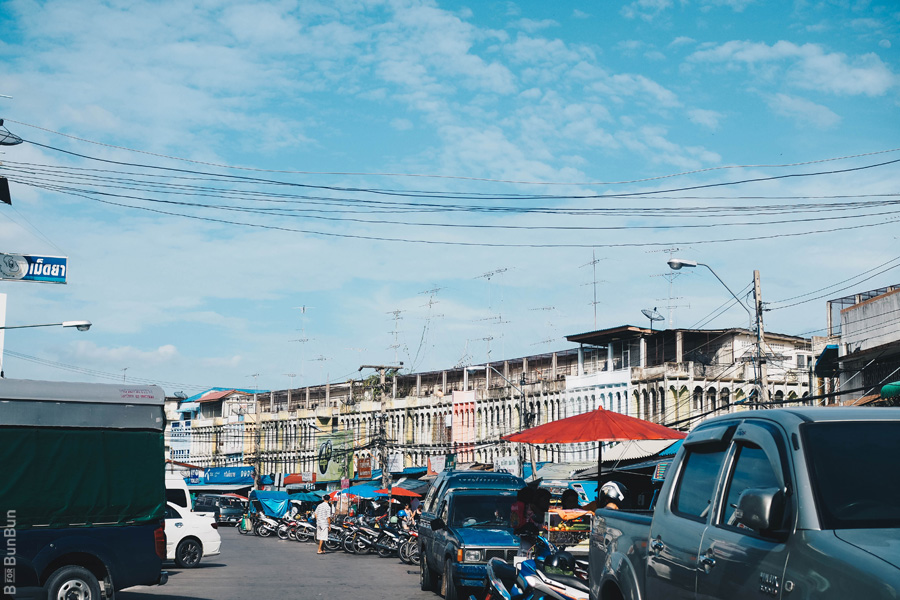 I came across Maeklong Railway Market during my research for the trip and was intrigued by this unique market that has a railway running right through it. The locals also call it Talat Rom Hoop, which literally means ‘Umbrella Pulldown Market”.

Our driver dropped us somewhere along the perimeter of the market and the short walk to the market was already buzzing with the excitement of a typical local wet market. 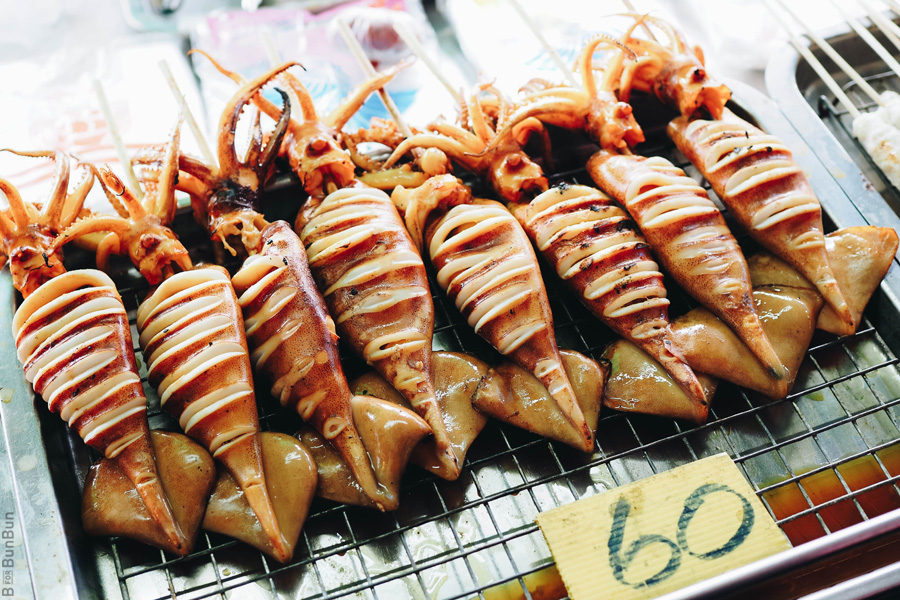 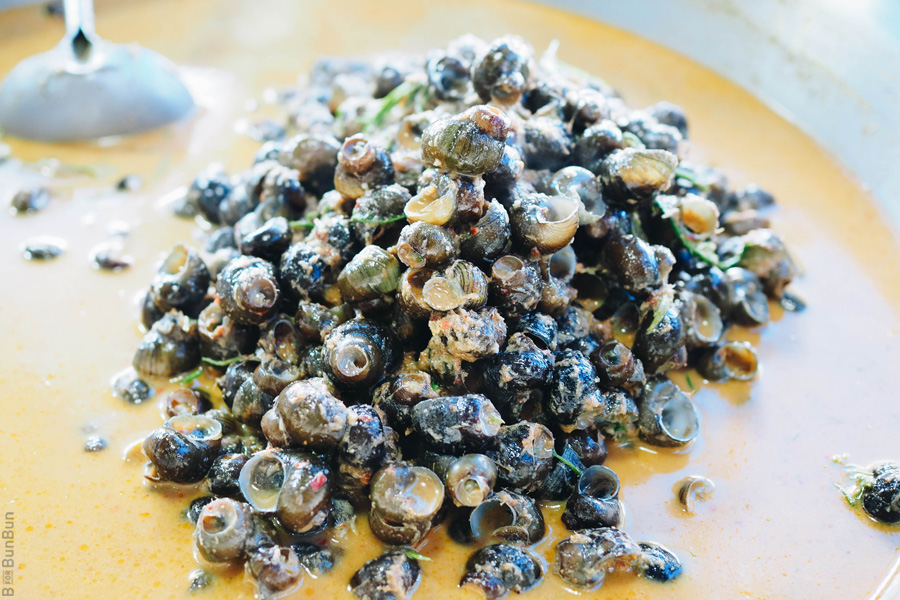 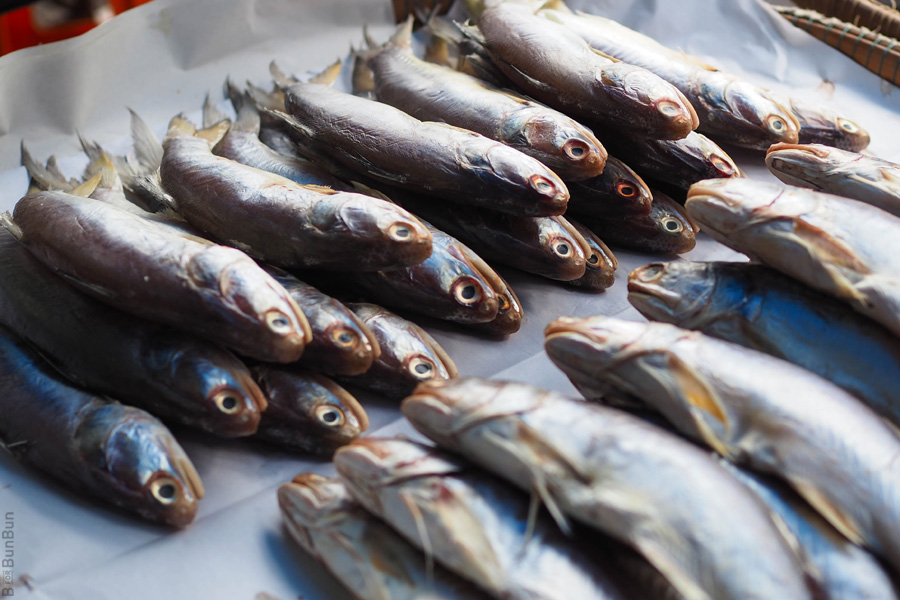 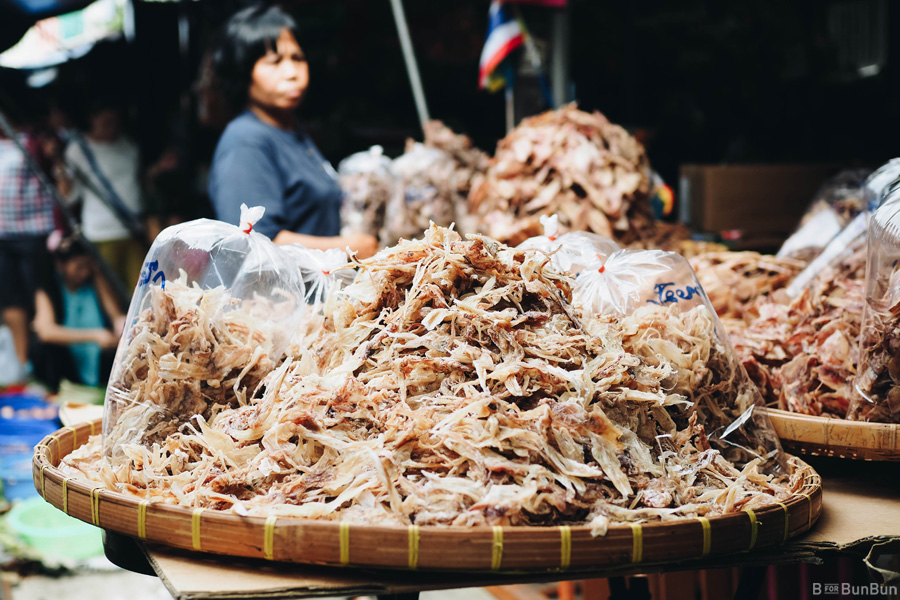 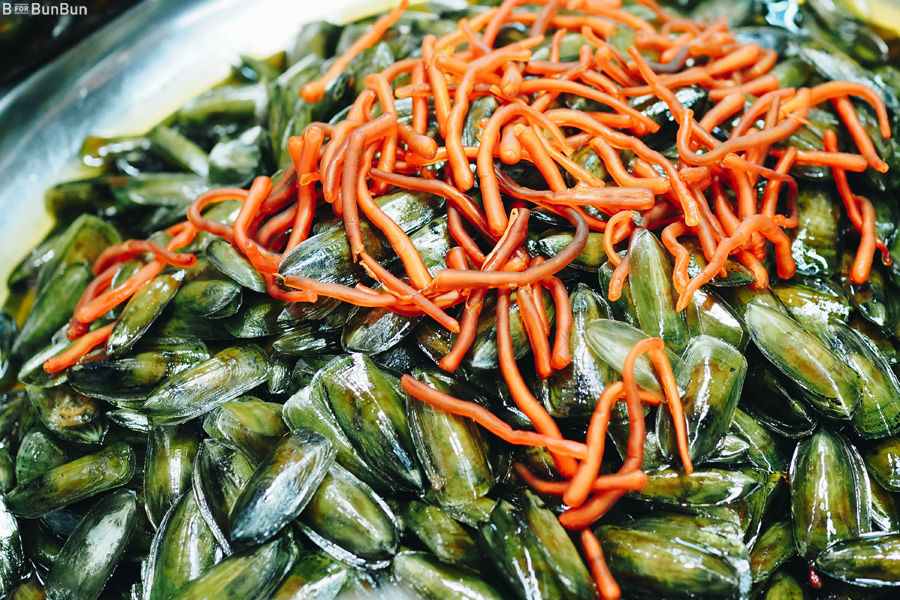 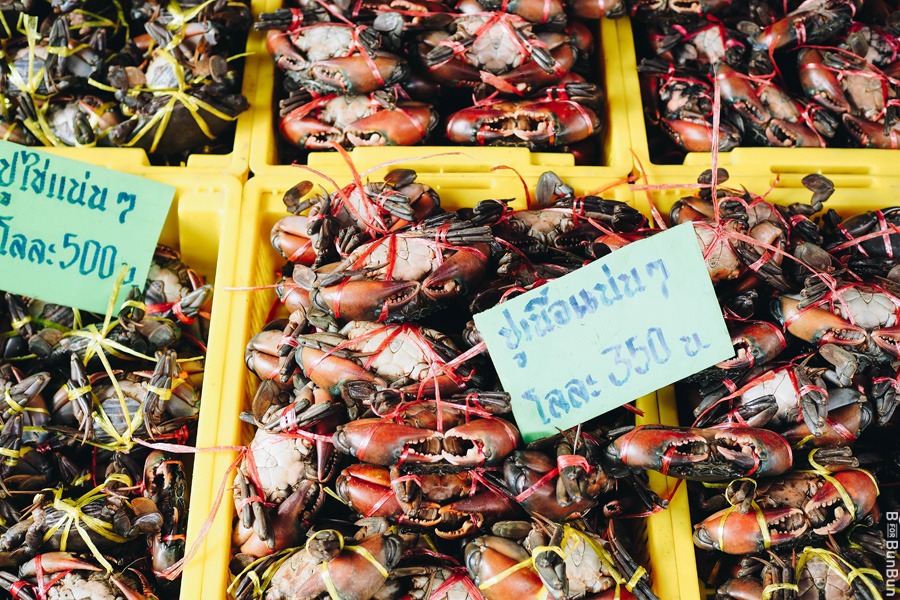 The market has been around since 1905; I had never seen an old train before and being there in the presence of such an old train on a railway with a century of history was pretty mind-blowing.

Minutes before the train arrived, a horn blared and the market TRANSFORMED. Stall owners retracted their umbrellas, leaving their wares as they are, held on to the poles and waited for the train to pass. Nobody moved and everyone (I mean us tourists) waited in anticipation and awe. The train moved slowly at around 30km/h for safety reasons and it was such a tight squeeze at my spot that if I were any fatter, I would not have fit. Right after the train passed, the stalls resumed operations.

There was this inconsiderate man who stood on the railway track, right in front of the train, taking pictures from the time the train crawled from its stop to when it travelled quite close to him. Yeah, he wanted good pictures, but so did all of us. His selfish act had everyone else’s pictures ruined with his back view. -_-” 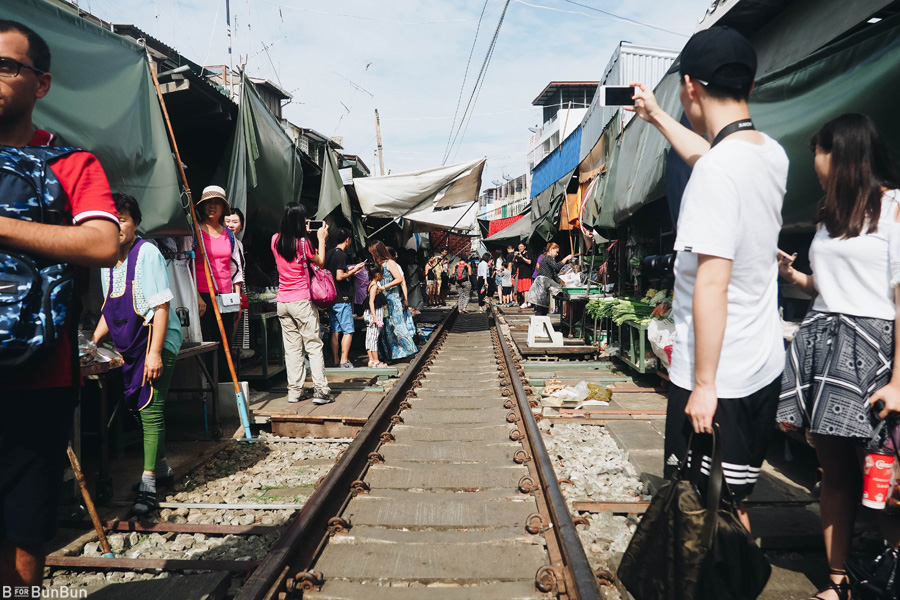 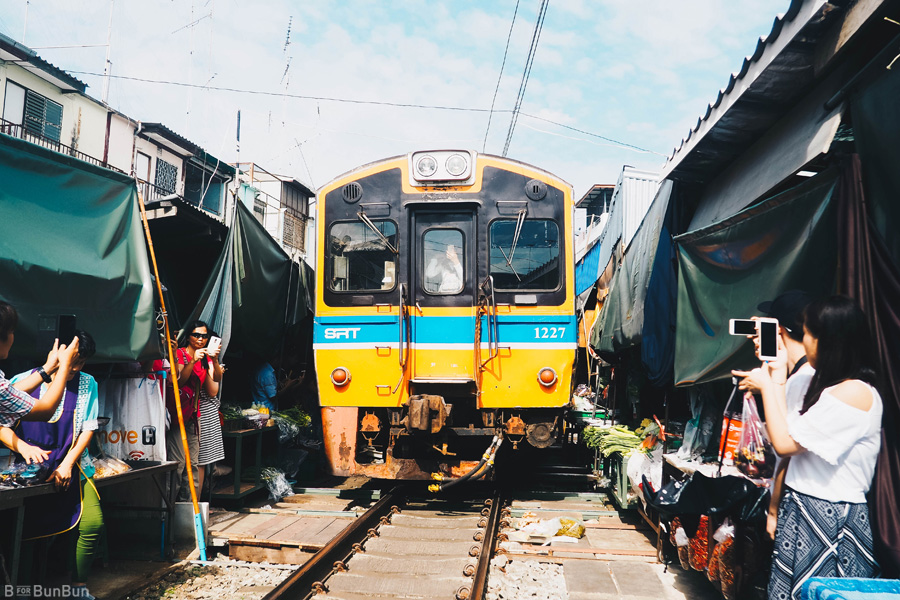 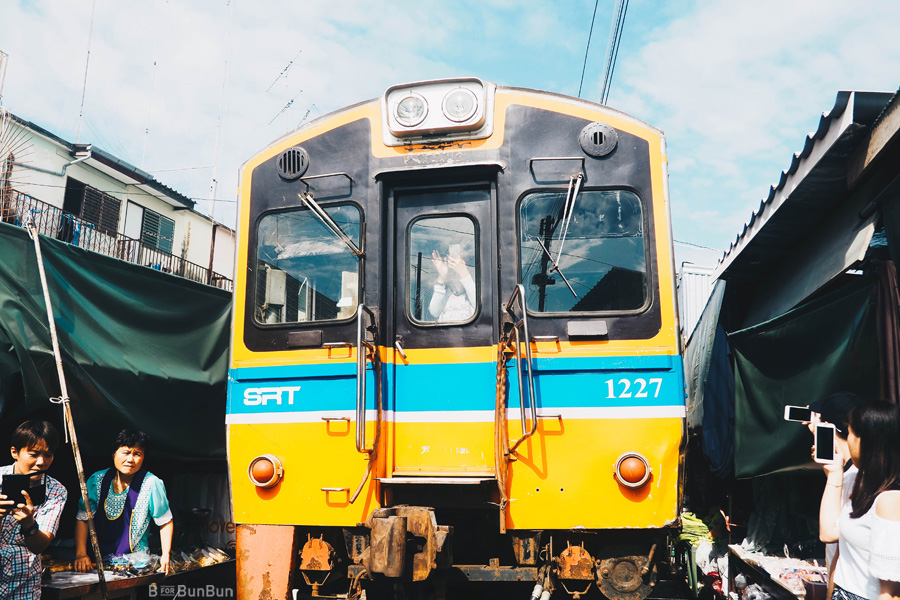 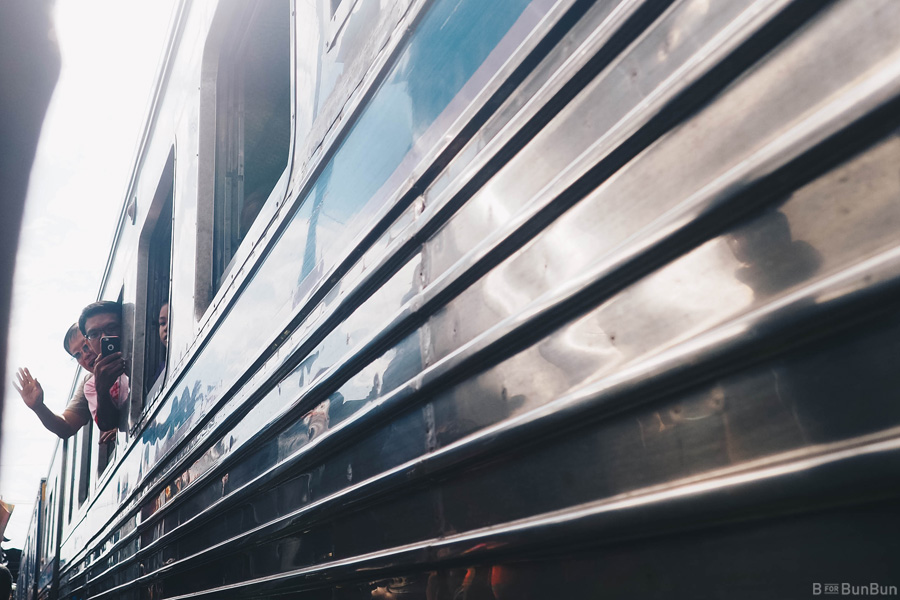 It was so close I could touch the sides of the train without extending my hand fully! 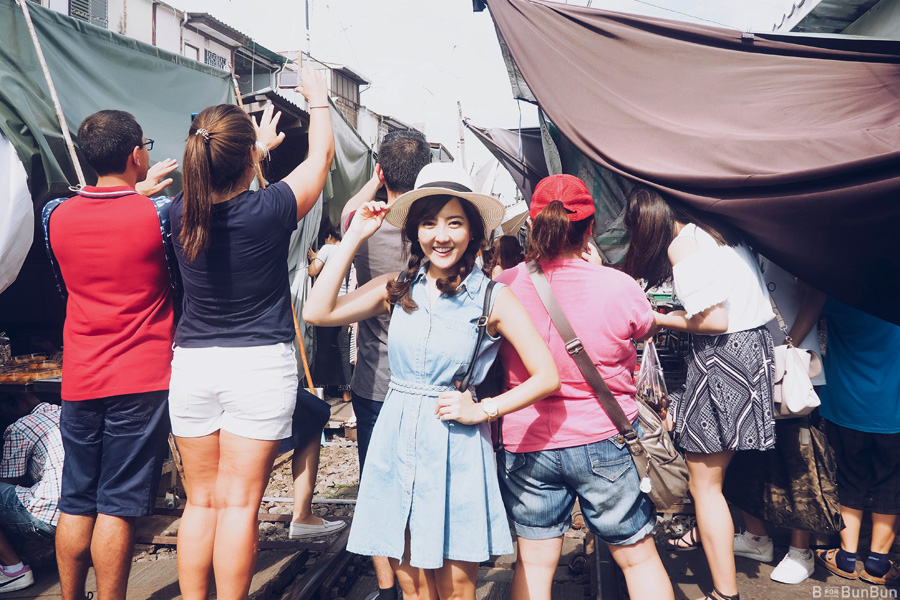 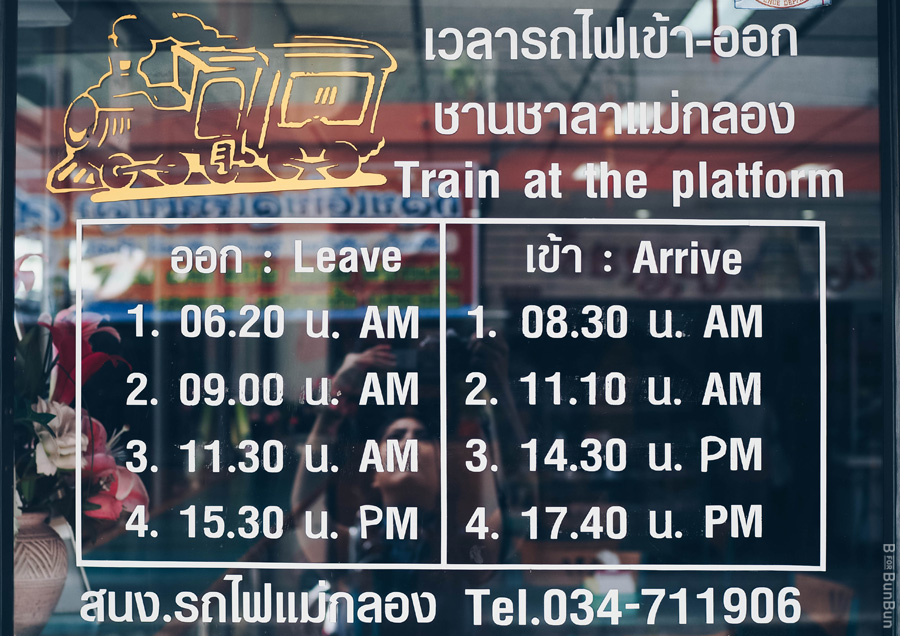 The search for accurate train timings was an arduous task. Every online source provided a different set of arrival and departure timings. Even our driver did not know the timings nor where to find them. He told us that the trains used to run through 7 days a week, 7 times a day. But as more people move out into the city and travel less by train, the train timings and frequency have changed several times over the years.

Thankfully, the eating house had the train timings pasted at the shop front. This schedule is accurate as at 13 August 2016 🙂

We had breakfast at the famous On Luk Yun (which to be honest was over-rated) in the morning, but after Wat Pho and by the time we reached Maeklong Railway Market it was way past lunch and we were famished. If you do visit, either have a hearty brunch or be prepared to scout for food like a headless chicken.

Coming from Bangkok where the streets are lined with food stalls, it was such a contrast to see only a handful of obscure eateries near the market. We later found ourselves at a small eating house after walking too much in vain searching for one ourselves and had to rely on gestures to get help from staff of a phone shop. Strange to us, since a market is always in close proximity to a hawker centre in Singapore.

We HAD to catch the 1430 arrival, otherwise we would be very late for Amphawa Market or miss it altogether. We could make a quick detour to Amphawa if that really happened, but that would have disrupted the flow of things. Halfway through lunch, we left our food and rushed to catch the train. Make sure you station yourself early to earn a good spot, say 15 minutes before train arrival.

How To Get From Bangkok To Maeklong Railway Market

From Wat Pho, we booked a 7-seater GrabCar that brought us to Maeklong Railway Market. Since we would spend a few hours at Maeklong Railway Market and then to Amphawa Market, which was just a 10-minute drive away, we decided to book the taxi driver for the rest of the day. The easiest way really is by minivan. Some sources mention that you can take a minivan from Victory Monument, next to Century Movie Plaza (BTS exit 4). But unless you’re on a very tight budget and have plenty of time, traveling directly from where you are in Bangkok is easier.

Avoid arranging anything time-sensitive after Amphawa Market. The traffic back to Bangkok was horrendous, I think it took us twice the time, and we missed our massage + onsen. But that’s okie! I finally got to tick Maeklong Railway Market and Amphawa Floating Market off my checklist! 😀 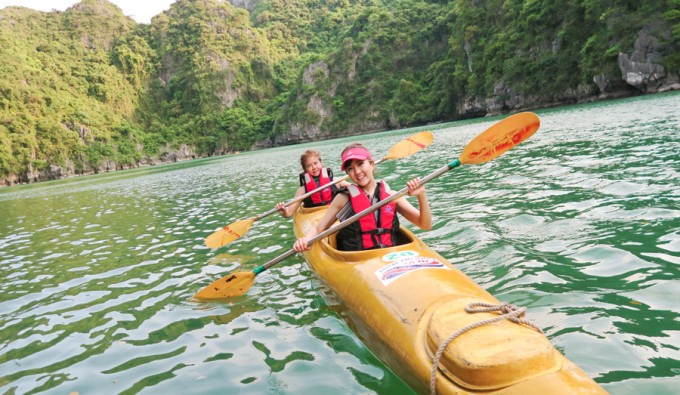 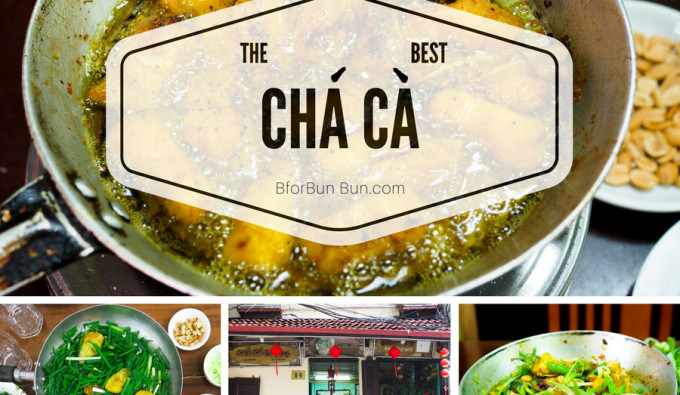 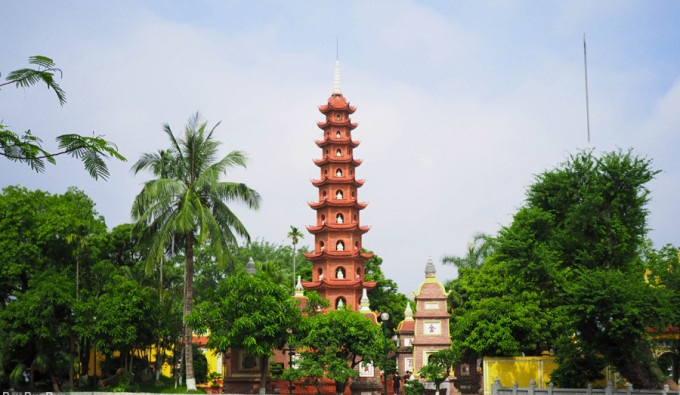 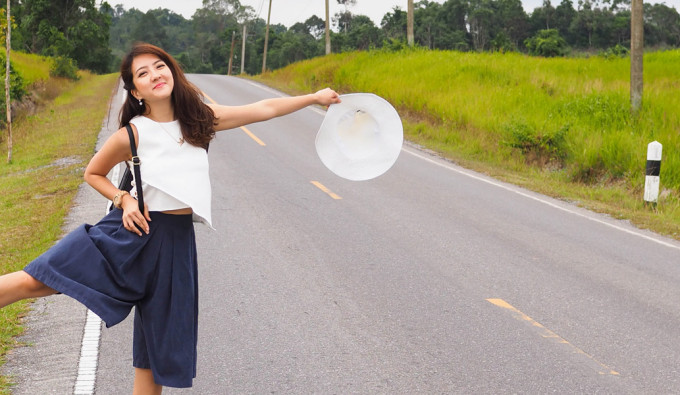 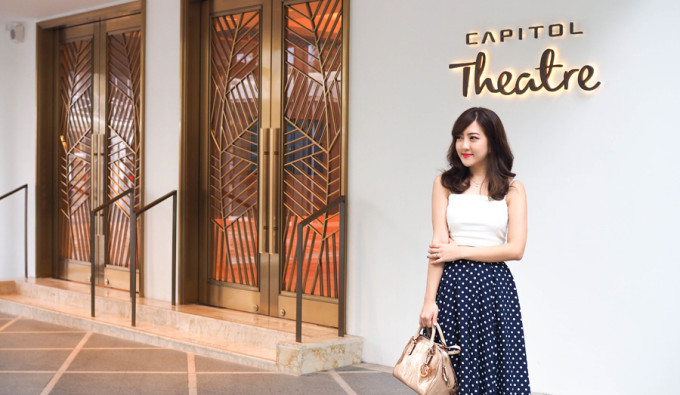