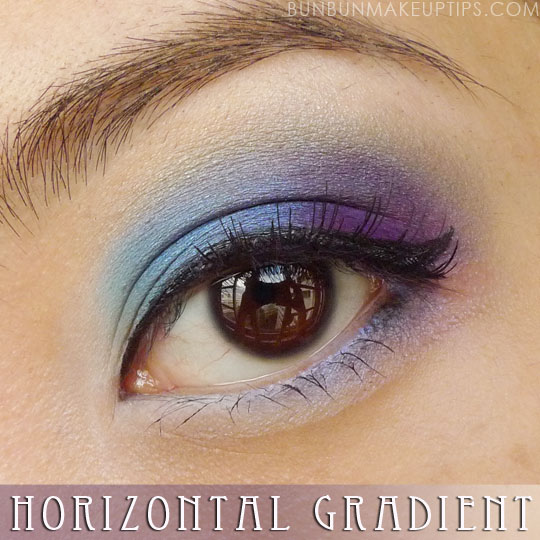 At long last, we have come to the fifth installment of the Eyeshadow Tutorial for Asian Eyes series. Here, we will discuss the Horizontal Gradient Method of eyeshadow application.

(Ah yes, if you’re confused why this is the ‘Horizontal Method’, especially since this term was already used in Part 2, then you ought to read this post!)

Lest you get lost in the sea of information in this tutorial, you might want to first check out the other episodes in this series:

Part 1: Where to Apply Eyeshadow

From my observations and research, the Horizontal Gradient Method is more well-known and commonly practised in the Caucasian makeup world because their larger lid space allows for more colors to be placed and, unlike many Asians, do not have as heavily hooded eyelids. Most Caucasians only experience hooded lids when they age.

Half of the world’s Asians do not have a Fold in the Lid at all; they have monolids and can be referred to as Mongoloids (Wikipedia). (It has been brought to my attention by some concerned readers that this term has negative connotations. I used the term in an anthropological context and hope no offense is taken.)

The Horizontal Gradient Method of eyeshadow application is also one of the ways to shape the eye and adjust the distance between eyes.

In my post on the types of eye makeup for different types of eyes, I wrote about manipulating the Outer 1/3 of the Lid to create the illusion of a wider or narrower gap between the eyes. You can also manipulate the Outer-V (Where is the Outer V?) to widen or bridge the gap.

Having horizontal gradients on the Lid requires blending - you really have to blend well - otherwise the eye makeup look will look block-ish. What we want is a smooth transition of one color to the next – left to right to left.
I think it is even more important and harder to blend horizontal gradients than vertical gradients. In Part 2 where I elaborated on the Vertical Gradient eyeshadow technique, you can see that the upward/downward gradation of colors is very easy to achieve. There're much less things to do and look out for in the Vertical Gradient method, which looks gorgeous on most Asian eyes, especially those with hooded lids or monolids.

If you have thicker double eyelids like I do, you have more freedom to switch between the Vertical and Horizontal Methods simply because we have more room on the lids to play with for horizontal gradients, yet still look sophisticated with vertical gradients. Double eyelids FTW (for the win, not the other vulgar FTW)!

But fret not, those who are single lidded or have hooded lids! I have seen people with such eye shapes do well with the Horizontal Gradient Method, you just have to bring the colors ABOVE the fold (hooded) or stop under the Socket Line (mono).

Now, let’s get started with the eye makeup tutorial!

Remember these from Part 1 of the Asian Eyeshadow Tutorial series? 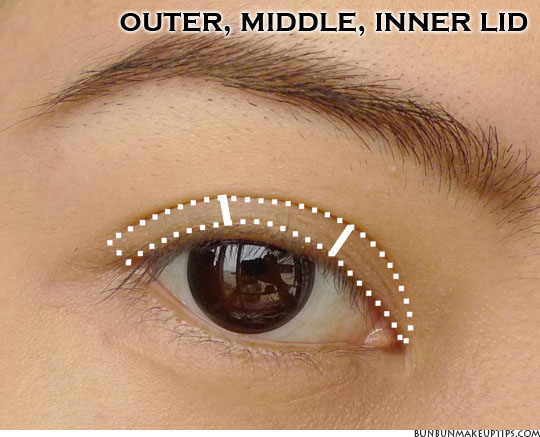 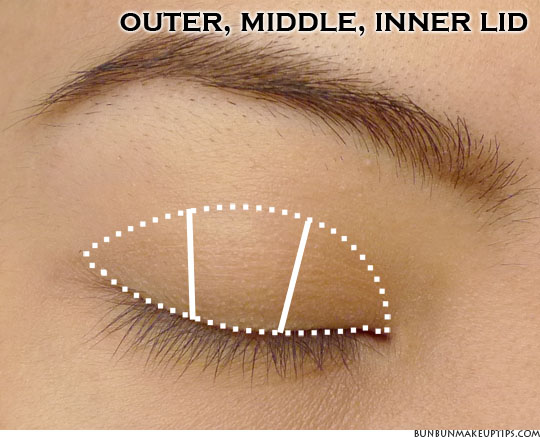 Today we will put theory into practice!

Always apply an eye primer to enhance the vibrancy of the eyeshadows. This step is especially important if you have oily lids like mine. Without an eye primer, my eyeshadows and eyeliner usually slide off by mid-day.

Apply the darkest shade of your selected set of eyeshadow colors on the Outer 1/3 of the Lid. Here I used Sugarpill Poison Plum.

Next, place a lighter shade on the Middle 1/3 of the lid. Here I used Speed Blue from Kat Von D Beethoven Palette.

I used a lighter blue (Sugarpill Afterparty) too, just so that it will transit more smoothly into the next color. You can most definitely do with just 2 or 3 colors for your gradient. No need for 4 and above.

On the inner 1/3 of the lid and a little on the inner corner, apply Sugarpill Tako.

At this point, your eyeshadow will look blockish, messy and really artsy. LOL. 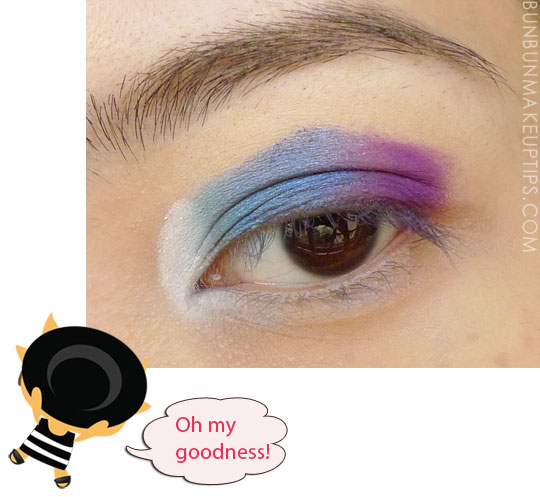 Proceed to blend out the edges with either a clean brush if you want to leave it at that, or a color for the Contour Area. I prefer the latter because I always prefer to define my eye Contour Area to warm the face and add depth to my eyes. I used NYX Mermaid (find it here), a good dupe for MAC Humid. Blend with MAC 217.

Also apply some color on the Lower Lashline to balance out the look. Speed Blue was used. I luuurve Speed Blue, and now that I've got that eyeshadow nicely depotted with Tequila, I can use them even more often now! Tequila was used to highlight the brow bone area here.

Get your liner on! And don't forget to Tightline! 😀

Finish the look by curling your lashes and apply mascara and you're good to go. If you've got some time to spare, put on some false eyelashes!

I prefer the DUO Eyelash Adhesive in DARK-TONE over CLEAR-WHITE coz I don't like that the white one sometimes dries yellowish instead of transparent. Also, since I always use black eyeliner when I apply falsies, the black one melds into the line perfectly.

I was so glad to have been able to use up my white eyelash glue for my Halloween 2011 Geisha look.

And that's why I'm giving away the black one as one of the presents for the Bun Bun's Birthday Giveaway! Enter Giveaway Contest here!

I love these falsies. They look so natural and don't look overwhelming against the backdrop of soft blues and purples. (FAQ answered: I got them from Taiwan)

While waiting for the glue to dry, pack your table. LOL. 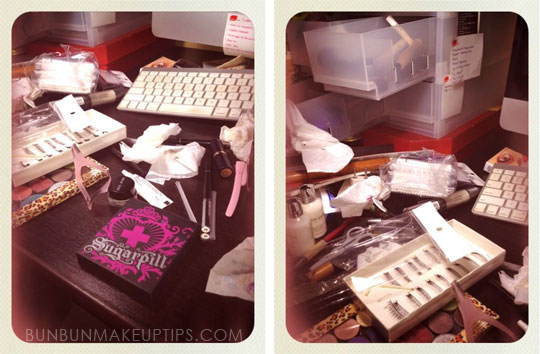 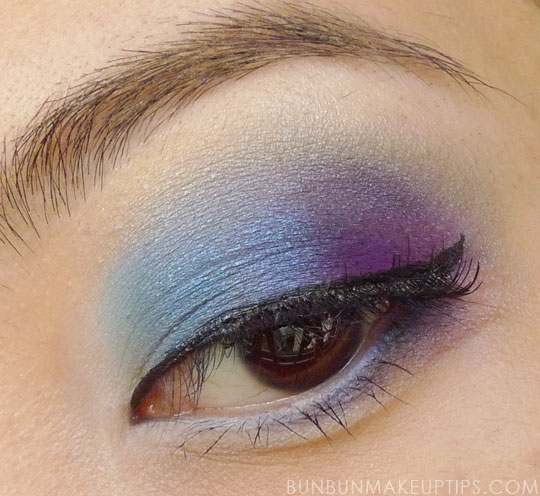 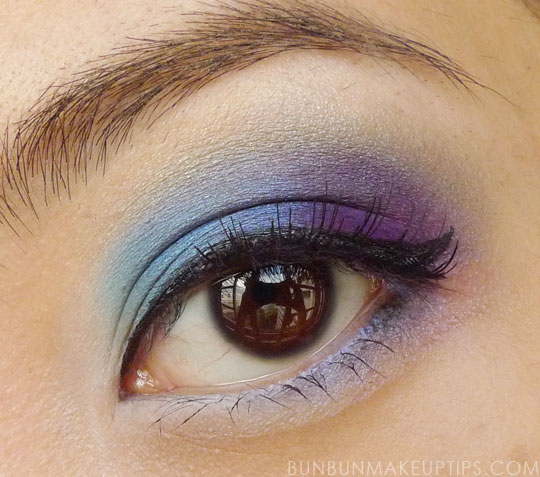 Bun Bun's Makeup Tip: The trick to making each color blend seamlessly into the next so that there isn't any obvious start and end to each 'block' is to use a brush with firm but soft-to-the-skin bristles to merge side-by-side colors together (I recommend MAC 239, elf Eyeshadow Brush).

Blend Poison Plum into Speed Blue, Speed Blue into Afterparty, Afterparty into Tako. Don't be over-adventurous and use a single stroke to blend across all the colors.

Blend as you go along, little by little. << Very important!

Most eyeshadows are highly blendable nowadays, even those at drugstore prices. There are the occasional ones that make you go 'How did this pass the Blending Quality department?' - refering to the non-shimmery sides of L'Oreal HiP Eyeshadow Duos, but yup, most are pretty easy to blend.

Here are some looks using the Horizontal Gradient Method: 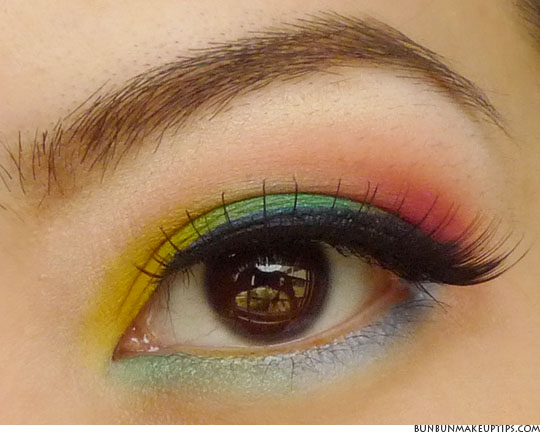 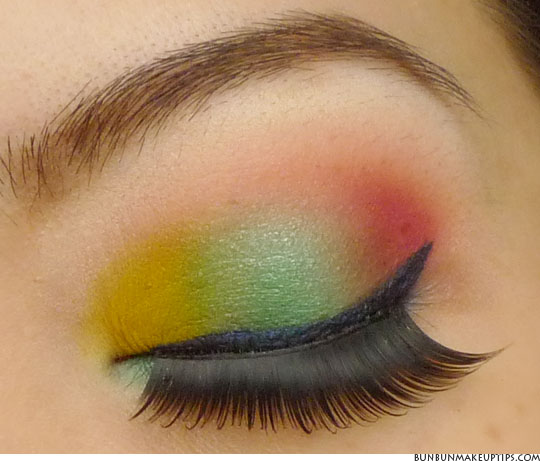 And don't think the Horizontal Gradient Method can only be used to create bold looks. It is very much applicable to everyday eye makeup looks too!

Ohmygawd, we're done with the 5 episodes of the Asian Eyeshadow Tutorial series! Can't believe it! 😀

Have you enjoyed this Eyeshadow Tutorial for Asian Eyes series? I think it's a good idea to do more of such, what would you like to see next?

Part 1: Where to Apply Eyeshadow